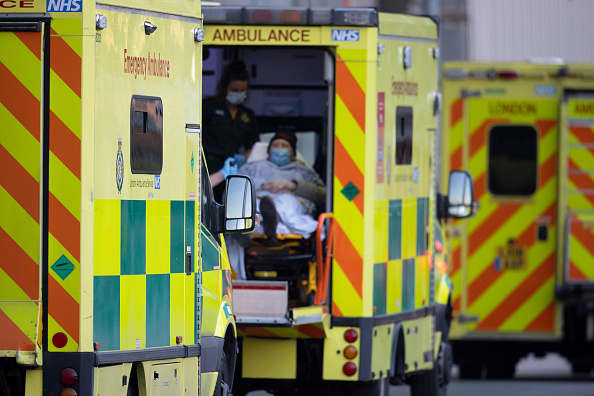 Patients arrive in ambulances at the Royal London Hospital, on January 05, 2021 in London, England. The British Prime Minister made a national television address on Monday evening announcing England is to enter its third lockdown of the covid-19 pandemic. This week the UK recorded more than 50,000 new confirmed Covid cases for the seventh day in a row.

LONDON — London Mayor Sadiq Khan on Friday declared a major incident over the rapid spread of the coronavirus in the U.K.’s capital city.

He had previously warned the virus was “out of control” and the National Health Service was “on the cusp of being overwhelmed.”

“I have declared a major incident in London because the threat this virus poses to our city is at crisis point,” Khan said via Twitter.

“One in 30 Londoners now has COVID-19. If we do not take immediate action now, our NHS could be overwhelmed and more people will die,” he added.

Major incidents have previously been declared in the wake of the Grenfell Tower fire in June 2017 and the terror attacks at Westminster Bridge in March 2017 and London Bridge in November 2019.

The increased pressure on already strained health facilities in the city coincides with the resurgent spread of Covid-19, as the U.K. scrambles to contain a highly infectious variant of the virus.

On Wednesday, the Health Service Journal reported, citing a leaked NHS England briefing to the capital’s most senior doctors, that London’s hospitals were on track to be overwhelmed by Covid within two weeks.

The report said the NHS England presentation had projected that, even if additional Covid patients grew at the slowest rate considered likely, the capital city’s health service would be short of nearly 2,000 general and acute and intensive care beds by Jan. 19.

NHS England was not immediately available to comment on the report when contacted by CNBC on Friday.

A nurse adjusts her PPE in the ICU (Intensive Care Unit) in St George’s Hospital in Tooting, south-west London, where the number of intensive care beds for the critically sick has had to be increased from 60 to 120, the vast majority of which are for coronavirus patients.

Prime Minister Boris Johnson on Monday announced the third national lockdown for England in an attempt to curb the virus spread. He urged people to “stay at home” just like in March 2020 during the country’s first national lockdown. The measures legally came into force on Wednesday.

To date, the U.K. has recorded 2.89 million cases of Covid-19, with 78,633 related deaths, according to data compiled by Johns Hopkins University. On Friday, the government reported that another 1,325 people had died within 28 days of a positive test, its highest daily death toll since the pandemic began.

In recent weeks, optimism about the mass rollout of Covid vaccines appears to have been tempered by the resurgent rate of virus spread.

The U.K. on Friday approved Moderna’s Covid vaccine for emergency use in the country. It is the third shot that has been authorized for use in Britain, following earlier approvals for vaccines from Pfizer and BioNTech and the University of Oxford and AstraZeneca.