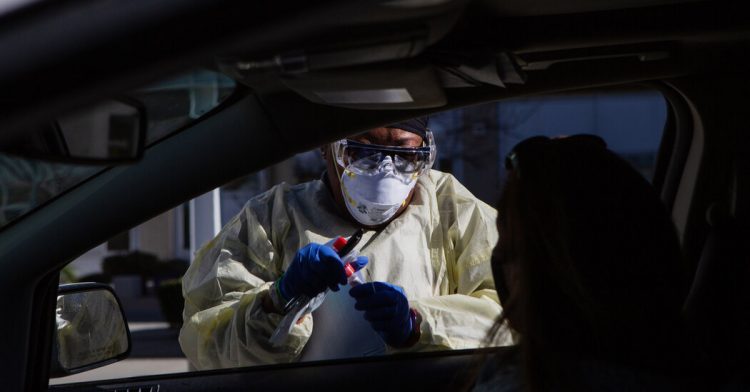 About 3.8 million people passed through Transportation Safety Administration travel checkpoints between Dec. 23 and Dec. 26, compared with 9.5 million on those days last year. Only a quarter of the number who flew on the day after Christmas last year did so on Friday, and Christmas Eve travel was down by one-third from 2019.

And AAA’s forecast that more than 81 million Americans would travel by car for the holiday period, from Dec. 23 to Jan. 3, which would be about one-third fewer than last year.

For now, the U.S. is no longer seeing overall explosive growth, although California’s worsening outbreak has canceled out progress in other parts of the country. The state has added more than 300,000 cases in the seven-day period ending Dec. 22. And six Southern states have seen sustained case increases in the last week: Tennessee, Alabama, Georgia, South Carolina, Florida and Texas.

Holiday reporting anomalies may obscure any post-Christmas spike until the second week of January. Testing was expected to decrease around Christmas and New Year’s, and many states said they would not report data on certain days.

On Christmas Day, numbers for new infections, 91,922, and deaths, 1,129, were significantly lower than the seven-day averages. But on Saturday, new infections jumped past 225,800 new cases and deaths rose past 1,640, an expected increase over Friday as some states reported numbers for two days post-Christmas.

Looking to the Thanksgiving holiday for lessons is complicated. Case numbers and deaths have continued to rise since, but the patterns look like a plethora of microspreads rather than a mass superspreader event.

Over all, experts have told The Times, areas of the U.S. that were improving pre-Thanksgiving — like the Midwest — continued to do well afterward, while regions that were seeing higher numbers before the holiday continued to worsen.