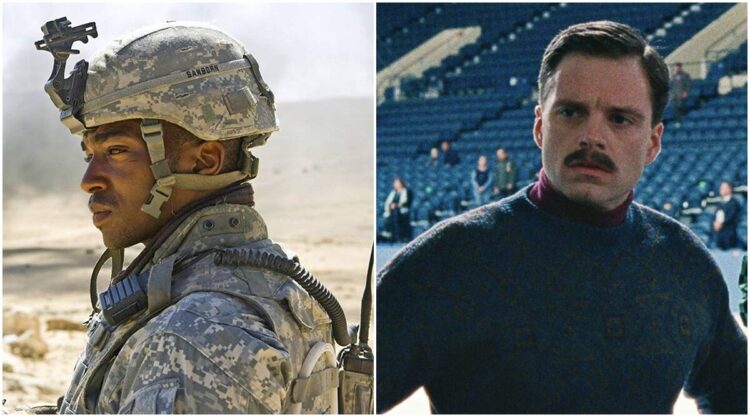 Sebastian Stan and Anthony Mackie are all set to scorch the screens with their love-hate bromance in upcoming Disney Plus Hotstar series The Falcon and the Winter Soldier. The duo had earlier shared screen space in Marvel movies like Captain America: Civil War, Avengers: Infinity War and Avengers: Endgame among other films. Before we see them weave their magic in the new MCU show, let us take a stock of the kind of varied projects Stan and Mackie have been a part of till now. Note: This is obviously not their complete filmography, but a glimpse of their artistic potential.

Not many know of this American miniseries, starring the likes of Sigourney Weaver and Sebastian Stan. Said to be inspired by the lives of those who have lived in the White House, the Greg Berlanti-created show is in turns affecting and funny, if not completely original. Sebastian shines as the openly gay son of Former First Lady Elaine Barrish (portrayed by Weaver).

Okay, so the Ridley Scott directorial that came out in 2015 is more-or-less a Matt Damon vehicle. But it also boasts of an impressive ensemble cast, starring the likes of Jessica Chastain, Sean Bean, Kristen Wiig and of course, our very own ‘Winter Soldier’ Sebastian Stan. The Martian is not all-consuming and powerful like Amy Adams’ Arrival, but it is still an enjoyable ride.

You can watch The Martian on Disney Plus Hotstar.

Ricki and the Flash

A forgotten musical dramedy, Ricki and the Flash is all about Meryl Streep’s stellar act, admittedly. But hey, when has it ever hurt to watch our favourite actors share screen space? Yes, Sebastian Stan also features in the movie alongside Streep. The movie is about Ricki, who after years and years of fear and procrastination, finally follows her dream of becoming a rockstar. But family comes in the way and drama ensues.

Ricki and the Flash is available to stream on YouTube.

I, Tonya is about figure skater Tonya Harding, and is a darkly comic take on some of the most controversial moments of Harding’s life. While the talented Margot Robbie plays Tonya, Sebastian Stan plays her former husband Jeff Gillooly. I, Tonya is sometimes hilarious, sometimes dark and at other times a complete tear-jerker. It was helmed by Craig Gillespie.

After that somewhat serious list of projects, it is time to take things light with the very binge-able American teen TV series, Gossip Girl. Sebastian Stan played Carter Baizen in Gossip Girl, in case you didn’t notice or had forgotten. Time to rewatch, perhaps?

Anthony Mackie famously made his film debut with rapper Eminem in the 2002 music movie 8 Mile. Mackie, in an admiral turn, played the main antagonist of the movie, Papa Doc aka Clarence. The actor was fierce, at times truly hateful and almost always convincing in the Curtis Hanson directorial.

8 Mile is available to stream on Google Play.

Written and directed by Rodney Evans, Brother to Brother released in 2004. In this acclaimed movie, Mackie played a gay black artiste whose family treats him as an outcast. The film was well-received by the critics; Anthony Mackie was hailed for his thoughtful, heartfelt and powerful performance in the movie.

Directed by Ryan Fleck, the 2006 drama featured Ryan Gosling, Shareeka Epps and Anthony Mackie in significant parts. While Gosling stunned as the troubled History teacher, Mackie made an impact as Frank, the local drug dealer. The movie was welcomed with open arms, and Gosling’s performance earned him an Oscar nod.

You can stream The Hurt Locker on Amazon Prime Video.

The Hate U Give

Anthony Mackie plays a small but important part in this 2018 American movie based on the Young Adult novel of the same name. What happens when you witness someone you know get killed for nothing? How do you live with yourself and what is the process of justice and grieving like in such a case? The powerful George Tillman Jr directorial tackles these questions whilst giving us a thoroughly engaging, topical film in return.

The Hate U Give is available to stream on Disney Plus Hotstar.

The Falcon and the Winter Soldier will start streaming on Disney Plus Hotstar from March 19 onwards.