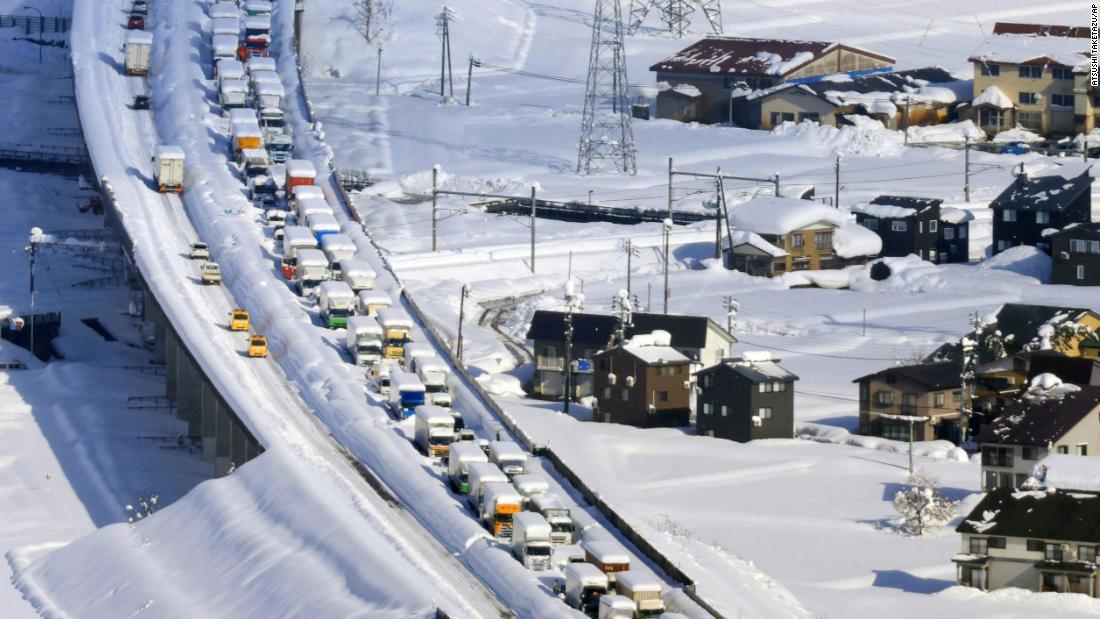 Reports of the traffic jam, on the Kanetsu Expressway connecting Tokyo and Niigata prefectures, began emerging on Wednesday. By the early hours of Thursday morning, authorities had closed the highway entrance to alleviate clogging.

The jam began after a car got stuck in deep snow in the middle of the highway, grinding traffic to a halt, according to the Nippon Expressway Company (NEXCO), the country’s highway operator.

The country’s central and northern regions had been hit with heavy snowfall that morning, disrupting transit and causing some communities to lose power.

Traffic built up on the stalled highway; at its peak on Thursday night, the jam stretched to 15 kilometers (about 9.3 miles), NEXCO told CNN. Some segments of the long traffic line were able to move slowly with starts and stops, but some motorists remained stuck in place for more than 40 hours.

The jam continued through Friday; the lanes coming from Tokyo eventually cleared, but the lanes heading into the capital were still halted. As of noon on Friday, there were still 1,000 cars stuck.

Photos of the highway show the long lines of unmoving cars, many with piles of snow on top of and around their vehicles, stranded amid snow-covered fields.

Some limited relief came on Thursday when emergency responders passed out rice balls, bread, crackers, sweet snacks, and 600 bottles of water, as well as thousands of liters of gasoline and diesel oil.

But it wasn’t enough, with drivers stuck for many more hours in the cold.

“The snow was extremely heavy. As time went by, the cars got buried. I was really scared,” one unnamed driver told Japanese public broadcaster NHK. “I’ve eaten all of my food and drinks. Now, to drink water, I have to melt snow I collect in a plastic bottle.”

A woman in her 30s and a man in his 60s were taken from the jam to hospital for respiratory problems and nausea on Thursday, according to Niigata’s crisis management officer, Tsuyoshi Watanabe. No fatal or serious incidents have been reported so far.

Watanabe added that the prefecture has asked for the Japan Self-Defense Forces to be dispatched to provide water, food, gasoline and portable toilets for the people still stuck on Friday, and to help clear away the snow.

NEXCO is also warning drivers, through social media and over the radio, to be careful of the risk of carbon monoxide poisoning while waiting in their cars for hours at a time.

Prime Minister Yoshihide Suga has met with ministers to discuss the heavy snowfall, calling on local officials to work together to restore services and help those affected, NHK reported.

This story was updated to reflect that the traffic jam started on Wednesday.