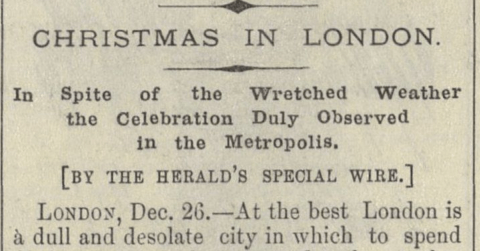 [BY THE HERALD’S SPECIAL WIRE.] LONDON, Dec. 26. — At the best, London is a dull and desolate city in which to spend Christmas Day, but yesterday the weather was successful in giving the town a specially wretched appearance. The streets, after the heavy rain which had fallen through the night, were wet and muddy, and rain, snow and driving sleet fell at intervals during the entire day and kept the streets clearer of foot passengers than on an ordinary Sunday.

The result was that London presented a bleak and deserted aspect, except at the hours during which religious services were held. These, in spite of the wretched weather, were largely attended. Westminster Abbey, where there was a carol service and sermons by the dean, was crowded both morning and evening. The fine musical services at St. Paul’s Cathedral also drew immense congregations into the City, the dean being the preacher there also.

Other divines who attracted large holiday congregations were the subdean at the Chapel Royal, St. James’s; Canon Ainger, at the Temple Church; the Rev. Canon Wilberforce, at St. John’s, Westminster; Dr. Parker, at the City Temple, and the Rev. Hugh Price Hughes at his chapel off Regent-street.

Notwithstanding the discomforts of out-of-door exercise, numerous bands of music and singers were to be met with in all parts of the town. Otherwise there was outside no special indication that the great annual festival had arrived. In the poorer quarters of the metropolis, however, numerous dinners, breakfasts and entertainments were given to children and aged people of scanty means.