Home General 2020 in climate: As the world took the pandemic heat, global warming only became worse

2020 in climate: As the world took the pandemic heat, global warming only became worse 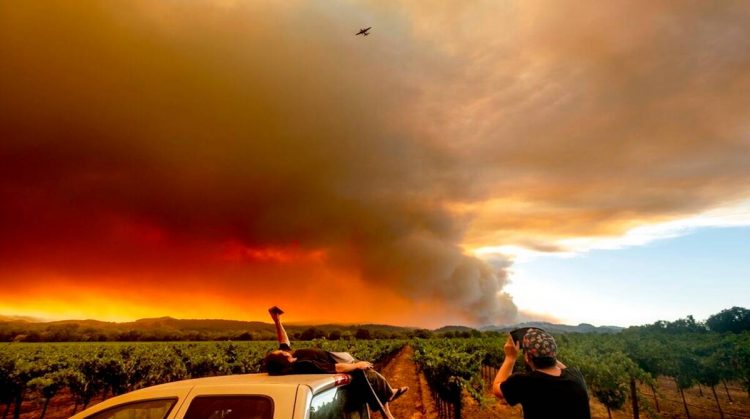 2020 will go down in history as the year of major uncertainties and upheavals. While the coronavirus pandemic upended ‘business as usual’ and saddled global economies with massive setbacks, climate change impacts were also equally glaring and can be seen in some extreme weather events happening across the globe that continue to affect millions of lives and livelihoods. Due to the pandemic, assuring health security took precedence while climate plans and ambitions were put on the back burner. Important to be reminded here that there’s a yawning gap between what countries have pledged to do as per their nationally determined contributions (NDCs) and what scientists say is required to avert a climate crisis.

In the middle of the year, when most countries imposed Covid-induced global lockdowns and either slowed or stopped industrial activity, there was a brief glimmer of hope for the environment as greenhouse gas emissions plummeted. But confining people to their homes and shutting down industries wasn’t a practical solution anyway in the long-term to bring down overall carbon dioxide emissions or to halt climate change.

In fact, a World Meteorological Organisation (WMO) report in November this year said, “The lockdown has cut emissions of many pollutants and greenhouse gases such as carbon dioxide. But any impact on CO2 concentrations – the result of cumulative past and current emissions – is in fact no bigger than the normal year to year fluctuations in the carbon cycle.”

India’s pollution levels were seen dropping during the lockdown, improvement the AQI of Delhi, Faridabad, Gurugram, Noida and Ghaziabad as well as in Mumbai, Bengaluru, Kolkata, Chennai, Indore, Patna and Singrauli. (AP Photo/Mahesh Kumar A.)

Consequently, we are on course to reach pre-corona emission levels.

To make things a little more precarious, this year is also second hottest on record after 2016, as per WMO’s provisional report on the State of the Climate 2020 published on December 2, which collected data from January till October 2020. To top that, 2020 has witnessed extreme temperatures in the Arctic, record-breaking wildfires in Australia, hurricanes in the Atlantic, for instance, the relentless back-to-back Category 4 hurricanes that pounded Central America in November this year, and flooding in several parts of Southeast Asia and Africa leading to the displacement of millions of people.

There were, however, some small wins, to be had during the pandemic.

Although just an ambition for now, the European Union (EU) had put forward a green deal earlier this year (but one that they will seek to define in 2021) that makes its climate-neutrality strategy the centerpiece of the 750 billion-euro ($824 billion) pandemic recovery plan. This coupled with world’s largest emitter China’s pledge that they’ll aim to become carbon-neutral by 2060, India’s assurance of exceeding Paris Agreement goals and more crucially, US President-elect Joe Biden’s pledge for America (second largest emitter) to rejoin the Paris Climate accord are developments that infuse hope in global climate dialogue, and one based on collective responsibility.

Meanwhile, as global greenhouse gas emissions (GHGs) continue to increase, it has led to numerous severe events this year.

One of the largest recorded icebergs floats near the island of South Georgia, South Atlantic. (Corporal Phil Dye/Ministry of Defence via AP)

Another worrying trend was the rise in ocean heat content (OCH) in 2019 which was the highest recorded yet in comparison with data collected since 1960. And OCH will continue to rise well into the next few decades. This is significant news as oceans are responsible for absorbing at least 90 per cent excess heat from the atmosphere, thereby playing a key role in regulating the global climate.

Global warming was most acutely observed in the Siberian Arctic, where temperatures were more than 5 degree Celsius above average. This heat reached its apex around late June when Verkhoyansk recorded 38.0 °C, which as per the WMO assessments is the “the highest known temperature anywhere north of the Arctic Circle”.

The Arctic has continued to warm twice as fast as the global average ever since the mid-1980s, which confirms a prolonged downward trajectory of the quantum of summer Arctic sea ice sheet.

One of the largest recorded icebergs floats near the island of South Georgia, South Atlantic. (Corporal Phil Dye/Ministry of Defence via AP)

Going ahead, the world will watch with renewed interest three key developments in climate change discourse: the outcome of next year’s COP26 summit in Glasgow, what happens when EU pushes to define more concretely the Green Deal, and lastly, track just how countries that have pledged to go carbon neutral or achieve ‘net zero’ emissions by 2050 will get there.

Here’s to a more resilient, cleaner and greener, 2021.