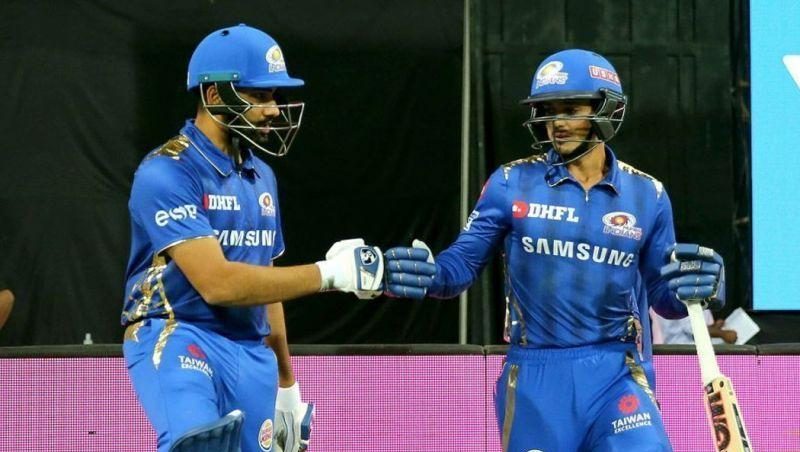 Mumbai Indians (MI) had another successful IPL campaign as they lifted their fifth title last year. The franchise became only the second side after Chennai Super Kings to retain the IPL title after they defeated Delhi Capitals in the finals. It was the batting unit that rose up to the occasion in the second half of the season, and that eventually made the difference.

Ishan Kishan top-scored for Mumbai Indians with 516 runs, whereas Suryakumar Yadav and Quinton de Kock both made valuable contributions with the bat. Sachin Tendulkar is the only Mumbai Indians player to have won the Orange Cap, way back in 2010 when they finished as runner-ups to Chennai Super Kings.

Quinton de Kock had another impressive season with the bat, as he scored 503 runs in his 16 matches last season. The South-African scored at an average of 35.92 and had a strike rate of just over 140. De Kock smashed 46 boundaries and 22 sixes during last season and also ended as the second highest scorer for his side.

Quinton de Kock had a poor start to the IPL season and his place in the side was under serious scrutiny. However, he found form towards the second half of the season and never looked back since. The South African is one of the top contenders to win the Orange Cap this year. He was also impressive in 2019, where he scored 529 runs in his 16 innings at an average of 35.26.

Suryakumar Yadav had a terrific IPL 2020 campaign as he scored 480 runs in his 16 innings at an average of 40. He had an impressive strike rate of just over 145. He also earned his maiden call-up to the Indian T20I squad to face England after his good show with the bat in the IPL. Suryakumar grabbed the opportunity with both hands as he scored a magnificent half century in only his second T20I.

Suryakumar Yadav has been the most consistent player for Mumbai Indians in the past three seasons. In 2018, the right-hander scored 512 runs at an average of 36.57. In 2019, he scored 424 runs in his 16 innings and played a vital role in helping his side claim their fourth IPL title. He has the potential to outscore the likes of Quinton De Kock and Rohit Sharma and present himself as a serious contender for the Orange Cap.

Rohit Sharma is the skipper of Mumbai Indians

Rohit Sharma is one of the best batsman in the international arena. However, when it comes to the IPL, the MI skipper has often failed to deliver on a consistent basis. The opener scored 332 runs in his 12 innings last season at an average of 27.66. His highest tally of runs in the past four seasons came in 2019, when he scored 405 runs at an average of 28.92.

Rohit Sharma played a captain’s knock in the IPL final against Delhi Capitals last year, as he scored 68 runs in just 51 balls to help his side lift their second successive IPL title. Sharma’s highest tally of runs in IPL came way in 2013 when he scored 538 runs in 19 matches. He will be looking forward to having a much better season with the bat this year and prove his critics wrong. There is absolutely no doubt that Rohit Sharma can be among one of the top candidates to win the Orange Cap.