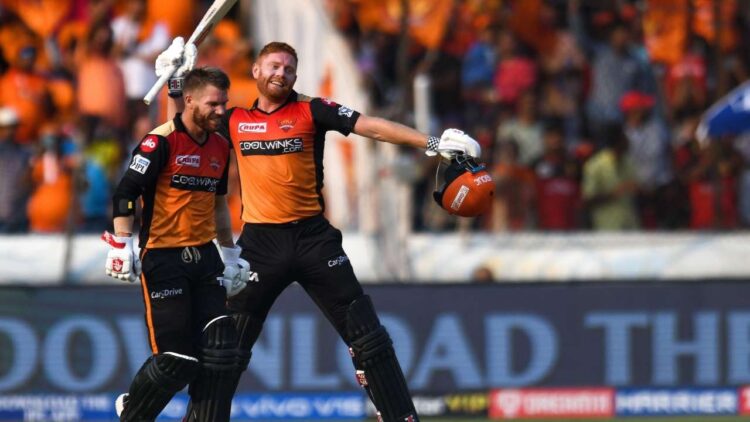 Sunrisers Hyderabad (SRH) continue to remain one of the most consistent teams in the Indian Premier League as they managed to reach the playoffs for a fifth consecutive last year. Led by David Warner, Sunrisers had a disastrous start to the season and were reeling at the bottom of the table. There was no sign of any change in fortunes until Jason Holder arrived and steered SRH into the playoffs. Eventually, the 2016 champions finished third overall, after their run was ended by Delhi Capitals (DC) in the Qualifier 2.

David Warner was the highest run-getter for SRH last season, having scored 548 runs in his 16 outings. Warner has managed to win the Orange Cap on three occasions, having won the prestigious accolade in 2015, 2018 and 2019.

David Warner, skipper of Sunrisers Hyderabad is one of the most successful batsman in the Indian Premier League. The Australian batsman has managed to score 5254 runs in his prolific IPL career so far at an average of 42.71 and a strike rate of just over 141. Warner continued his fine performance with the bat last season, scoring 548 runs at an average of 39.14 and he was also the third highest run-getter in the last year’s edition.

Warner’s highest tally of runs in a single IPL season came in 2016, when he amassed 848 runs in his 17 innings at a staggering average of 60.57. However, that still was not enough to win the Orange Cap that season, as Virat Kohli was in a class of his own. Under Warner’s able leadership, SRH continue to remain one of the most consistent sides in the tournament, having led his team to the title in the 2016 season.

Jonny Bairstow, the explosive English batsman scored 345 runs in his 11 matches last season. However, Bairstow was dropped to the bench in the final few games of the season, with Saha being promoted to the top of the order, opening alongside David Warner. With the likes of Jason Holder, Rashid Khan and David Warner having already cemented their place in the lineup, it leaves room for only one overseas player.

It will be a tough decision to leave out either of Kane Williamson or Jonny Bairstow, but it is expected that the Englishman will get the nod over for the Kiwi skipper, given that he comes on the back of an impressive limited over series against India. In the 2019 season, Bairstow scored 445 runs in his 10 innings at an average of 55.62 before he had to fly back to England for international duty. Provided that he is available for the full season, he can be a serious contender for the Orange Cap.

Manish Pandey is expected to bat at number three for the Sunrisers this season. Pandey scored 425 runs last season at an average of 32.69 and was the second highest run-getter for his side. The right-hand batsman is one of the most experienced batsman in the Sunrisers squad, having played 146 IPL games, and amassing 3268 runs at an average of 29.70.

However, Manish Pandey has failed to live up to his potential, which has cost him a place in the Indian T20I side. Pandey has several questions to answer in the coming IPL season, and will have to step up for his side, who have vested their faith in the Indian and tasked him with the duty of batting at number three in place of Kane Williamson. On an individual basis, Pandey will hope to have a good IPL season and get himself back in the mix for a place in the Indian squad for the upcoming T20I World Cup.