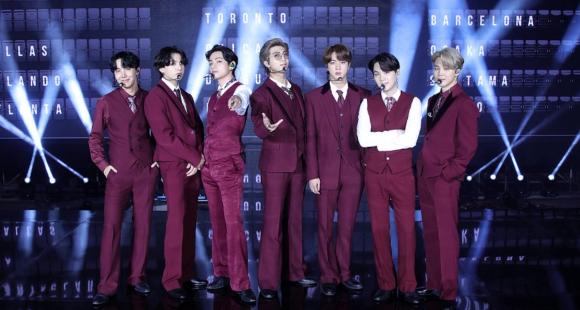 On January 31, the 30th Seoul Music Awards winners were announced. BTS bagged six of the total awards presented today. This includes the Daesang.

The 30th Seoul Music Awards were announced on January 31 and BTS won six awards at the show. The septet bagged Daesang this year. The win led to BTS recording their fourth consecutive Daesang victory at the awards show. Apart from the Daesang, BTS also bagged Best Album Award, Best Song Award, Bonsang (Main Award), K-Wave Award (outside of Korea) and the group along with their fandom – ARMY – were awarded WhosFandom Award. While BTS couldn”t attend the award show, they sent a video accepting the award.

As reported by Soompi, BTS leader RM said it was an honour to have won the Daesang and added the group is happy and grateful to have received the award. Jun added, “As we have received such a valuable award, it feels like we can start off this year with overflowing strength and energy. It is thanks to our ARMY that we were able to receive such a big award.” Jungklook thanked everyone for their constant support and love. “If you weren’t here, then BTS would not be here either,” Kookie said.

J-Hope noted that the pandemic did not allow the group to meet their fans. However, he hopes that the situation improves this year and they can meet soon. Jimin chipped in to thank the members, their families, and the Big Hit Entertainment staff, noting that they “work hard so that we can shine on stage.” V hoped that 2021 will be another happy year with BTS. “Everyone, please stay healthy,” he urged.

Check out the complete 30th Seoul Music Awards Winners below:

Discovery of the Year: ITZY

K-Wave Award (outside of Korea): BTS