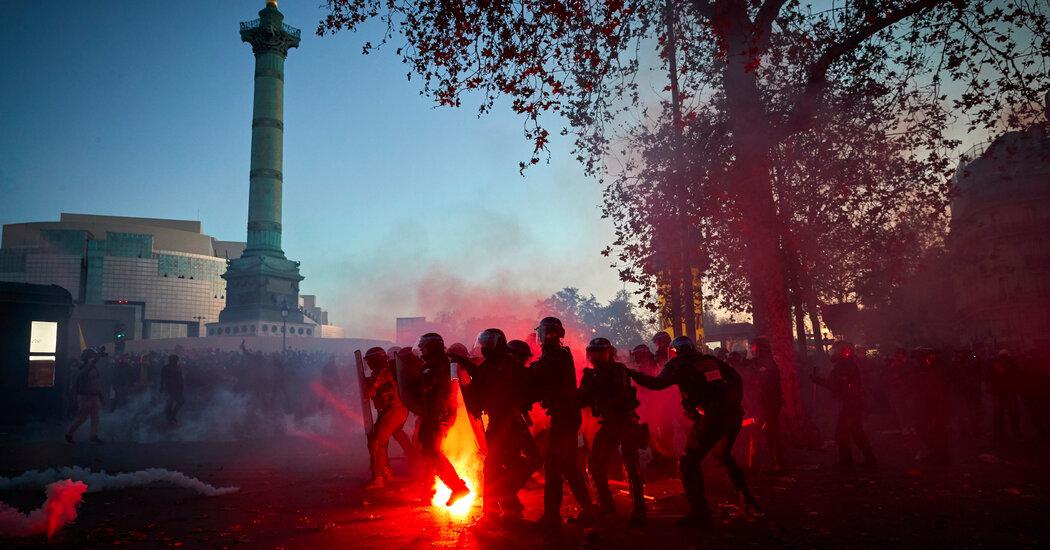 PARIS — Four police officers have been charged over the beating of a Black music producer in Paris this month, the authorities in France said on Monday, in a case that has shocked the country and forced the government to reckon with persistent accusations of police brutality and racism.

Graphic video posted on social media showed three officers pummeling the music producer, Michel Zecler, 41, with fists, feet and a baton on Nov. 21 in the entrance to a recording studio in the 17th arrondissement of Paris, while another threw a tear-gas canister through the window. Mr. Zecler said that several officers had also used a racial slur against him.

The footage, which was taken from a security camera and obtained by Loopsider, a French digital news outlet, was at odds with the officers’ account of the events, and outrage in France was swift.

The authorities quickly suspended the officers and opened an investigation. President Emmanuel Macron said in a statement on his Facebook page on Friday that the images of the beating “bring shame upon us,” even as his government comes under growing pressure over a security bill that would restrict sharing images of police officers.

The official, who was not authorized to speak publicly about a continuing investigation, said that the three officers accused of beating Mr. Zecler had also been charged with forgery of official documents — over suspicions that the officers had lied in their police report about the events — while the officer accused of throwing the tear-gas canister had also been charged with damaging private property.

The authorities have not publicly identified the officers beyond their ages: 44, 35, 31 and 23. Two of them have been detained, while the others, including the one accused of throwing the tear-gas canister, were released under judicial control.

Rémy Heitz, the Paris prosecutor, said in a news conference on Sunday evening that the officers initially said that they had been trying to stop Mr. Zecler because he was not wearing a mask, which is mandatory in France because of the coronavirus pandemic, and because he was emanating a “strong smell of cannabis.” The officers also said that Mr. Zecler had tried to avoid them by entering the studio, that he had dragged the officers in with him and that he had been violent.

Mr. Heitz said that the police later found barely 0.5 grams of cannabis — less than 0.02 ounces — in Mr. Zecler’s bag and that the security camera footage showed that the officers had followed Mr. Zecler inside before beating him, while Mr. Zecler did not appear violent toward the officers.

Mr. Heitz said that the officers had admitted under questioning that their blows against Mr. Zecler “were not justified” but that they had told investigators that they had been acting “under the influence of fear” because they had been unable to bring a struggling Mr. Zecler under control in the cramped entrance to the recording studio.

Footage filmed by a neighbor and published last week by Loopsider showed, however, that one officer continued to hit Mr. Zecler on the street even as he was surrounded by about a dozen other officers. Several young artists who were attending a recording session at the studio were also hit by the police, according to the video.

Mr. Heitz also said that the officers, who have not been involved in previous incidents, denied using a racial slur.

The beating has fueled longstanding frustration that the French government is doing little to address accusations of police violence, especially against ethnic minorities. Mr. Macron said in his statement on Facebook last week that he had asked the government to come up with proposals to restore the public’s confidence in the police — a demand he has already made twice this year, first in January when a deliveryman died after police officers pinned him to the ground and put him in a chokehold, then again in June amid the global fallout over George Floyd’s killing.

But the beating has also struck a nerve amid more recent discontent over Mr. Macron’s security policies, which critics say infringe on civil liberties and shield the police from scrutiny.

Tens of thousands of people protested around France over the weekend against a security bill that would restrict sharing images of police officers. The bill was passed by the lower house of Parliament and still needs to be considered by the Senate, but the government is facing mounting opposition from civil rights groups, journalist unions and left-wing opposition parties.

That pressure has escalated since Mr. Zecler’s beating, even though it is not clear that the bill — which would criminalize the broadcasting of “the face or any other identifying element” of on-duty police officers if the goal is to “physically or mentally harm” them — would have applied in the case.

Christophe Castaner, Mr. Macron’s former interior minister and the head of his majority in the lower house of Parliament, announced on Monday that lawmakers would rewrite the provision entirely.

Frédéric Veaux, the head of the French national police, said in an interview with the Journal du Dimanche newspaper on Sunday that he had been “scandalized, like the rest of the police in this country” by the assault, comparing the officers who beat Mr. Zecler to “criminals” and promising that the police would be equipped with 15,000 new body cameras by next summer.

But Mr. Veaux denied that the relationship between the police and the French population was “damaged.”

“The police is a reflection of society, is it not on the margins,” he said, adding that there had been a “disinhibition” of the violence toward security forces over the past few years, especially after the Yellow Vest protests.

While the demonstrations on Saturday against the security bill were mostly peaceful, they were marred by violent clashes between the police and demonstrators later in the day.

An independent photographer from Syria, Ameer al-Halbi, was badly hurt when he was hit in the face by a police officer wielding a baton, which the head of Reporters Without Borders called “unacceptable.” Gérald Darmanin, the French interior minister, said nearly 100 security forces had also been wounded, including one police officer in riot gear who was violently beaten by demonstrators in Paris.