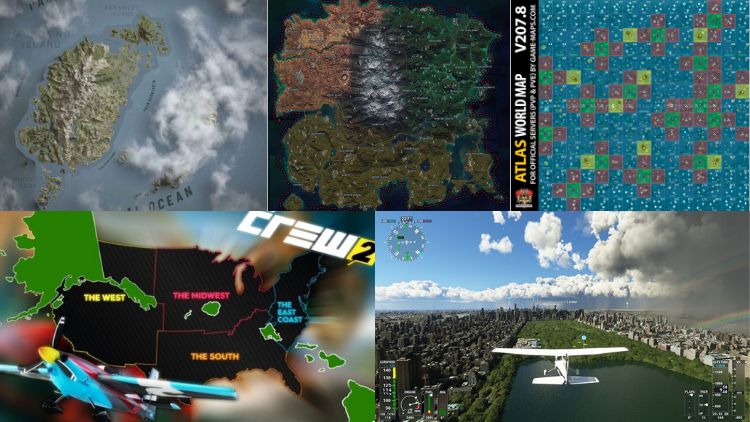 We have seen some absolutely huge open worlds lately but exactly how big are we talking? These are the 5 biggest game worlds of the last three years

Just Cause 4 is 395.26 square miles. It prides itself on being huge and the most recent entry is absolutely no exception. Sure they’re not nearly as dense as other open world games but with the crazy movement powers you get there’s some of the most fun games to just screw around. Getting around in this game is an absolute cinch. You’ve got three main tools, a grappling hook, a parachute and a wingsuit.

Using these three tools in tandem you can basically be Superman so you never have to touch the ground if you don’t want to and you can zip around the world at lightning speeds. The events of the game take place on the island of Solas which has four distinct climates, there’s jungles in the east, plains in the south, desert in the west and massive snowy mountains at the center. There’s the relatively small capital area, a metric ton of military bases for you to destroy and a whole lot of open country. Honestly it’s pretty empty but it’s also kind of the appeal of these games, just the massive scale.

Ghost Recon Breakpoint is 781 square miles. Here’s actually an example of how bigger doesn’t always mean better. Set on the island of Aurora which funnily enough is significantly bigger than the entirety of Bolivia from Ghost Recon Wildlands, which is only about 170 square miles. You do your special forces thing against an army of mercenaries who have taken the place over. Looking at the map you think there wouldn’t be much visual variety and there actually aren’t a ton of different biomes or anything but the actual locations added a lot of variety that would normally be a pretty samey world.

The fact that this is an island inhabited by a tech company is really what makes this world stand out. There are a lot of cool structures to explore that aren’t just run-of-the-mill run-down military bases and the important thing to mention is that though the map is huge a ton of it is just inaccessible water, like a good chunk has absolutely nothing on it so the actual size of the playable area of the game is a lot smaller than the map. If you’re an explorer there are some cool things to see.

The Crew 2 is between 1,931 to 2,703 square miles. It is basically an amusement park version of the United States and considering the US is pretty big, even a significantly shrunk down version of it is absolutely gigantic. All the major landmarks are here from Los Angeles to New York City and they’ve obviously been redesigned to be more fun to drive around in and that’s the thing, while the crew 2 is much bigger than the first game, what really makes a difference for the actual gameplay is the fact that they’ve added off-road vehicles and airplanes to the mix, so there’s actually something to do in the vast wilderness of the country rather than just driving past it.

The world from this game is absolutely huge and when it comes to very big worlds that are still handcrafted The Crew 2 has pretty much everything else beat.

Atlas is 17,374 square miles. There was a huge amount of hype for this one before it quickly died mostly thanks to the awesome trailer they released before launch. The actual game though has so little in common with the trailer that they showed. There is one thing we have to give the developers, though the game is absolutely massive, it’s basically just a series of empty islands and a whole lot of water and most players don’t even survive long enough to see all the island they even start on let alone another one but in terms of size it is huge.

Seriously this isn’t like Forza or an Assassin’s Creed game or anything, the map is huge and there are some interesting landmarks to find and it’s not all just random jungles but for the most part what you’ll be doing in this game is tediously crafting the basics of survival and not going on an epic adventure to see the world.

Microsoft Flight Simulator is literally as big as the Earth. There’s not a lot else to say about it. It is literally based on maps of the earth. There are some weird things that happen due to the way that it bases things off big maps but it’s literally based off of big maps. It’s huge and it’s accurate too, if you want to fly a plane it’s going to take you the amount of time to do anything that it actually would. There are no scale concerns. This is earth you are playing on earth our world and that’s it.