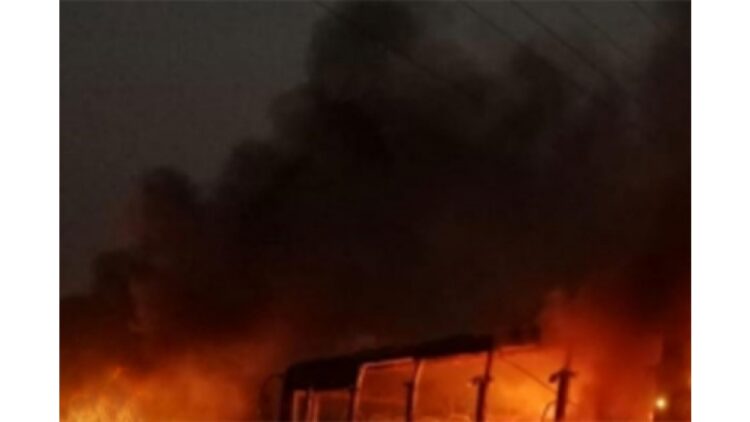 An official of the Ministry of Home Affairs said at least 500 innocent people injured by the militants’ attacks, while a case accusing 500 Hefazat members of violence was filed on Sunday evening, but no one has been arrested yet, Abu Bakar Siddique, officer in charge of Paltan Police station, told IANS.

Narayanganj Madaninagar Madrasha students blocked the Dhaka-Chittagong highway by burning tires from Sanarpar to Shimrail crossing in the morning, disrupting road communications to Chittagong and Sylhet.

In Sylhet, Jaamat members, moving under the Hefazat banner, brought out processions in different parts and several crude bombs were also exploded. Four people were arrested, but police declined to comment.

Due to the countrywide strike, no buses left Sylhet bus stand since the morning, while Hefazat activists, sporting sharp weapons, bamboo staffs and iron rods, obstructed traffic at every entrance point.

According to four injured journalists of Noakhali, the Hefazat brought out a procession in support of the shutdown at Chaumuhani Chowrasta and suddenly attacked the office of Noakhali TV Journalists Forum.

More than 50, including 10 policemen and nearly two dozen members of the ruling Awami League, were injured in Kishoreganj, during the protest. Hefazat attacked the party office on Station Road, and vandalised it, including its signboard and the photos of Bangabandhu and Sheikh Hasina.

Police lobbed teargas shells and fired blank shots to disperse the clashing groups, and additional personnel of police, the BGB and RAB have been deployed in the district.

Reports of vehicles being set afire were also received.

Talking to IANS, Home Minister Asaduzzaman Khan Kamal said: “When we pull the strings, we see that the leaders of these militant groups have been leaders of Jamaat-e-Islami before. Banned outfit Harkat-ul-Jihad, Ansar-Ullah Bangla Team, whatever… the main leadership of all of these outfits has come from Jamaat-Shibir – who were the auxiliary force of the Pakistan army in 1971. And the militants of Jamaat-e-Islami behind the screen planned all the tactics, and involvement of Basherkella makes it clear that the militant outfits that always create terror and anarchy have been newly incorporated. We are looking into all the issues. No matter where they are, no one will be spared.

“The situation is being instigated by spreading false rumours and video through social media through Basherkella and some other pages run by the Jamaat. We are treating these as sabotage and a stance against the state.”

A Ministry of Home Affairs statement said that in the last two days, some “unruly individuals and groups have destroyed government property in Chattogram’s Hathazari, Brahmanbaria Sadar, Sarail and Ashuganj upazilas in a religious frenzy”.

Among them, the Upazila Parishad, the Thana Bhaban, government land office, police outpost, railway station and houses of politicians have been damaged, it said, urging all concerned to stop all “disorderly conduct”, “otherwise, the government will take a strict stand to protect the lives and property of the people”.

It also said that the government was watching with concern, a group of orphans and children taking to the streets to destroy government property and cause casualties.

Noting untruths and rumours are being spread through social media, the statement warned that those involved will be identified and face stern action.

Law, Justice and Parliamentary Affairs Minister Anisul Huq warned that the government would take stern action against those who try to disturb law and order.

“Those who are trying to spoil the celebration of the golden jubilee of the country’s independence are surely not showing any respect or affection towards our motherland. Government is very aware about upholding freedom of speech and press freedom. We would not stop any small section of the society from giving their speeches, but would take strong action if they try to hinder law and order,” he said.