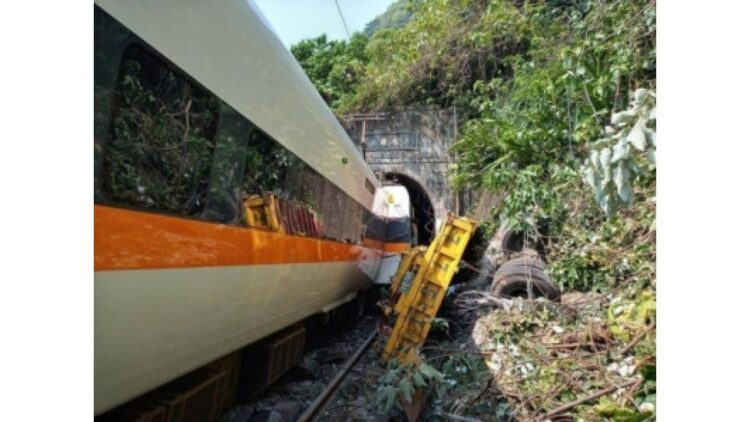 The Taiwan Railways Administration (TRA) said late on Friday that the derailment in Hualien County involved a maintenance truck sliding from a slope near a construction site above the railway, the DPA news agency reported.

The head of an eight-carriage train with 492 passengers and four crew members travelling from Taipei to eastern Taitung County hit the vehicle shortly before entering a tunnel, officials said.

TRA officials told a news conference that it was suspected that the parking brake was not holding the vehicle and that they were working to gather more concrete details of the crash.

The derailment occurred on the first day of a four-day break for Taiwan’s annual tomb-sweeping tradition. In early April, many Taiwanese people return to their hometowns to pay tribute to their ancestors and clean up family tombs.

The train driver and his assistant were both killed. The 51 victims included one French national, officials said.

The National Fire Agency said that the death toll might rise as some incomplete bodies on the scene were spotted and had not been removed.

The accident also left at least 146 people injured, including two Japanese nationals and one from Macau.

Several carriages were severely damaged in the crash, according to footage aired on local TV. TRA said that it would take a week to remove carriages stuck in the tunnel.

Taiwan’s Premier Su Tseng-chang sent his condolences to the families of victims. “I want to express my deep sympathies to the victims’ families and to the passengers who were injured,” Su told a news conference in Taipei.

The accident terrified passengers onboard. “I got out of trouble. I dared not look at the scene, where many people were lying down,” a passenger, surnamed Wu, told state-run Central News Agency. “It’s completely dark there. People had no idea what to do.”

Another passenger called Hsueh told Eastern Broadcasting Company that he and others had had to work together to break a window in order to escape.

Taiwan’s President Tsai Ing-wen has instructed the authorities to comprehensively investigate the cause of the accident, which is the worst of its kind in Taiwan’s history.

The last major train crash in Taiwan was in October 2018, when 18 people died.

Japan said it will be ready to help Taiwan if there is a request from the country.

“We offer our deep condolences to the victims of the accident and express our sympathies to all those involved,” Japanese government spokesman Katsunobu Kato told a news conference in Tokyo.

The express train that derailed in eastern Taiwan was manufactured by Japanese manufacturer Hitachi and started operations in May 2007, Japan’s Kyodo News reported, citing the Japanese conglomerate.

The American Institute in Taiwan (AIT), which acts as the de facto US embassy, also sent its deepest condolences to the victims, families, and communities impacted by the tragic derailment.