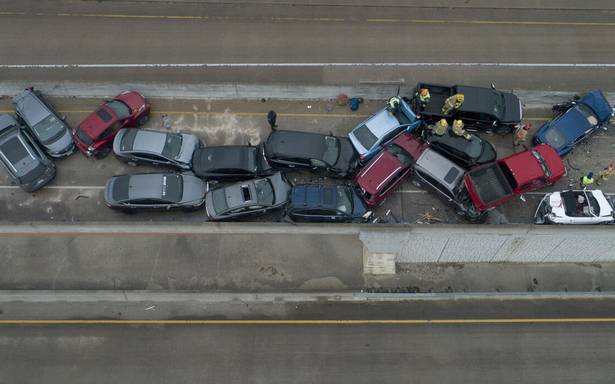 At least 65 people were treated at hospitals, with 36 of them taken by ambulance from the crash site on Interstate 35 near downtown Fort Worth

A massive crash involving more than 130 vehicles on an icy Texas interstate left six people dead and dozens injured on Thursday amid a winter storm that dropped freezing rain, sleet and snow on parts of the U.S.

At the scene of the crash on Interstate 35 near downtown Fort Worth, a tangle of semitrailers, cars and trucks had smashed into each other and had turned every which way, with some vehicles on top of others.

“There were multiple people that were trapped within the confines of their vehicles and requiring the use of hydraulic rescue equipment to successfully extricate them,” said Fort Worth Fire Chief Jim Davis.

At least 65 people were treated at hospitals, with 36 of them taken by ambulance from the crash site, including three with critical injuries, said Matt Zavadsky, spokesman for MedStar, which provides the ambulance service for the area. Numerous others were treated at the scene and released, he said.

First responders cleanup after a massive pileup on I-35W on Thursday, Feb. 11, 2021, near downtown Fort Worth, Texas.
| Photo Credit:
AP

The crash happened about 6 a.m., as many hospital and emergency workers were heading to and from work, so some of those involved were healthcare workers and emergency responders, including police officers, officials said.

“We did see a large number of people that were victims of this accident that were in scrubs, that had hospital IDs on… in some cases, our folks would know those folks,” Zavadsky said.

Fort Worth police Chief Neil Noakes said three officers were en route to work when they were injured in the crash, and one officer was injured while working the scene. He said all have been released from the hospital and that none of them suffered serious injuries.

“The roadway was so treacherous from the ice that several of the first responders were falling on the scene,” Zavadsky said.

Zavadsky said his crews carry a sand and salt mixture in the ambulances, which they used at the scene. At one point, he said, one of the ambulances was hit, but it sustained only minor damage and the crew members were fine.

The ice storm came as a polar vortex — swirling air that normally sits over the Earth’s poles — has moved near the U.S.-Canada border, resulting in colder weather farther south than usual, said Steve Goss, a meteorologist with the National Weather Service’s Storm Prediction Center in Norman, Oklahoma.

“As a result we’re getting unusually or unseasonably cold air that’s spilling south across a good portion of the United States east of the Rocky Mountains,” he said.

In Tennessee, police responded to about 30 traffic collisions and some flights were delayed at Memphis International Airport after freezing rain and sleet fell. In Kentucky, the governor declared a state of emergency to free up funding and help agencies coordinate as they responded to reports of slick roads and downed power lines. And in southern Indiana, schools and government offices closed.

In suburban Austin, more than two dozen vehicles were involved in a pileup on an icy highway, and five people were taken to a hospital, emergency officials said.

Goss said that smaller disturbances moving through the polar jet stream will bring “a shot of winter weather” into southern portions of the country.

He said some areas that don’t normally get snowfall will likely see heavy amounts over the next several days. He said current estimates show some areas of the southern Plains could get a foot or more.