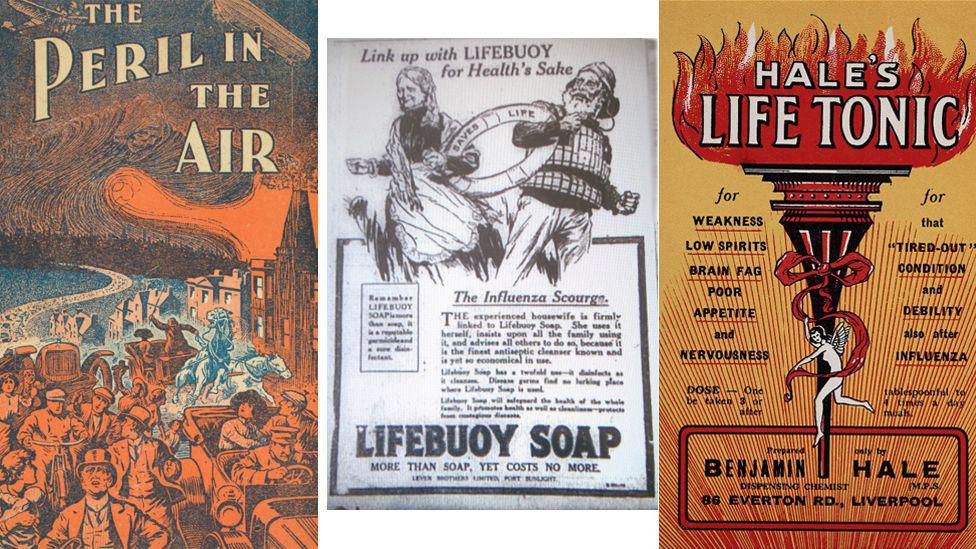 It’s almost impossible to avoid comparing the Covid-19 pandemic to the pandemics of the past, especially the bubonic plague and the 1918 flu pandemic. But it turns out that a century of medical knowledge, along with drastic improvements in food and drug regulations, make a huge difference in how we face off against a deadly pathogen. If you’d like a few examples, here’s how people tried to fend off the 1918 influenza.

Camphor is a waxy, strong-smelling stuff that’s found in the wood of the camphor laurel; you can also produce it from turpentine, which is distilled pine resin. During the 1918 flu pandemic, camphor was a popular ingredient in over-the-counter medicines. One Wisconsin doctor went as far as injecting it directly into a patient’s arms and legs in hopes of controlling his fever.

It turns out that camphor does help kill some bacteria and viruses, soothe coughs, and ease pain when applied to the skin. But, as a 2013 paper warns, “However, camphor is a very toxic substance and numerous cases of camphor poisoning have been documented.”

An ad for Oxo beef gravy claimed that “a cupful of Oxo two or three times a day will prove an immense service as a protective measure,” allegedly because well-nourished people were less likely to get sick. “It increases nutrition and maintains vitality in the system, and thus an effective resistance is established against the attacks of the influenza organism.”

The Oshkosh Daily Northwestern ran a recurring article advising people to “Go to bed and stay quiet—take a laxative—eat plenty of nourishing food—keep up your strength—-nature is the ‘cure.’ Always call a doctor.” Another remedy, published a few years later, recommended “keeping the bowels open” with Epsom salts while the patient drank hot lemonade and enjoyed a hot mustard foot bath, along with quinine.

Many people turned to alcohol as a preventive or a cure. According to a CDC oral history of the pandemic, “During the great flu pandemic of 1918, there was a county doctor who boasted that he had never lost a patient. His secret weapon was ‘rotgut’ whiskey. He would pour the whiskey into a patient to get them to cough up the phlegm. During the pandemic, he ran out of whiskey and there was none to be had in the community. The only whiskey in Lusk was locked–up in the sheriff′s office as evidence for a bootlegger′s trial. The sheriff refused to release the liquor. So, the doctor got a few prominent citizens together for a kind of vigilante committee that promptly seized the whiskey, depriving the sheriff of his evidence.”

Elsewhere, dry cities and counties around the country (the pandemic struck just two years before the onside of nationwide prohibition) made exceptions for medicinal use, and the major of Burlington, Vermont even opened a dispensary.

In the archives of the National World War I Museum and Memorial, you can find an original recipe for an onion soup that supposedly helped prevent the Spanish Flu (spoiler alert: it probably doesn’t prevent anything except a continued craving for onion soup). For centuries, people in Europe credited fresh-cut onions with the ability to fight off disease by pulling the germs right out of the air. The idea started with bubonic plague in the 1500s and continued through the flu pandemic at turn of the 20th century. But even the National Onion Association, which arguably has a vested interest in promoting onion use, says onions won’t save you from contagious disease: “There is no scientific evidence that a cut raw onion absorbs germs or rids the air of toxins/poisons.”

During the 1918 flu pandemic, snake oil salesmen did a booming business. That’s a literal statement; some newspapers carried ads for actual snake oil, supposedly made from the rendered fat of snakes (although labelling requirements were basically nonexistent, so a lot of alleged snake oil contained no snake-based ingredients at all). It’s also a figurative statement, as so-called “patent medicines” with names like Dr. Pasteur’s Microbe Killer, Kraft Preventative Powder, Father John’s Medicine, and Gude’s Pepto-Mangan. Most of these products contained little or no actual medicine, had never been through clinical trials, and in some cases they were actually harmful even to healthy people.

RELATED:  Sonu Sood on shooting with Chiranjeevi: He refused to hit me on screen, said people will curse him