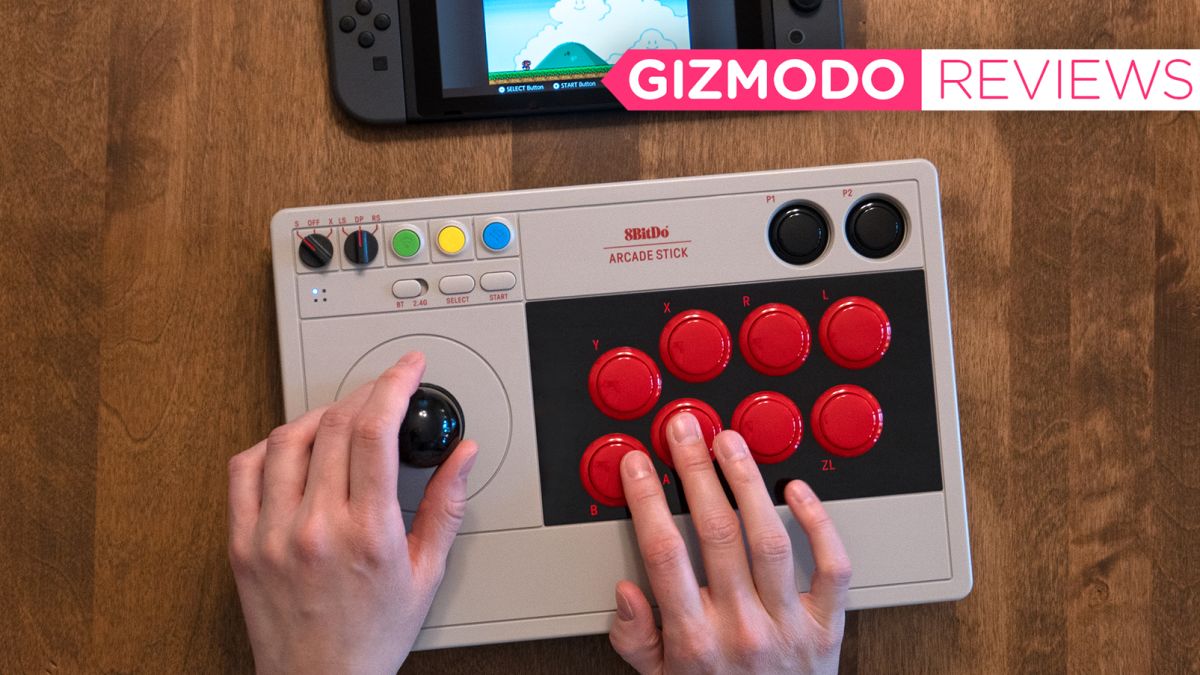 Having to feed a machine an unending supply of quarters to enjoy your favorite video game was just one of many reasons arcades died off. But if there was one reason to actually miss arcade machines it was those fantastic buttons and joysticks that never felt as satisfying to play with once they were miniaturized to fit on a gamepad. 8BitDo’s Arcade Stick does a great job at recreating that arcade experience, and you don’t have to be a pro gamer to enjoy it.

There are few companies with as solid a track record as 8BitDo has these days. Focusing on controllers and gamepads for both retro and modern play, 8BitDo’s products rival the quality of those from larger companies like Sony and Nintendo (minus the drift) but with a cheaper price tag than first-party options, and occasionally more functionality.

The joystick and action buttons all feel fantastic and the arcade stick is built like a tank. It can also be remapped and customized using 8BitDo’s Ultimate Software.

The joystick is digital only making the arcade stick all but useless for any modern games.

The 8BitDo Arcade Stick is a follow-up to the company’s $80 N30 Arcade Stick from a few years ago, and at $90 it’s the most expensive controller the company currently sells. That price tag means it will probably appeal more to pro gamers or fighting game enthusiasts, but even casual retro gamers will find a lot to like because this thing feels like it was built like a tank.

The first thing you notice about the Arcade Stick is that it’s solid and heavy—very heavy for its size—weighing in at over 4.6 pounds. It can be used on your lap but when perched on a desk or coffee table its weight, and a set of four large rubber feet, all but ensure you’re not going to knock it over in the heat of competition. The second thing you’ll notice is how satisfying it feels to mash the joystick around. There’s a soft click as you move it in different directions and while there’s not quite as much travel as there is on the tiny joysticks you’ll find on modern controllers, it’s a more satisfying tactile experience than a four-way D-pad.

The arcade buttons on the oversized gamepad feel just as great with a wonderful audible ‘ka-chunk’ every time they’re pressed. Before I had even synced the Arcade Stick to my Switch I spent the first the first few hours with it out of the box just mashing on the buttons and joystick—much to the chagrin of those who were trying to watch TV with me.

One of my complaints with 8BitDo products in the past has been that syncing and configuring the controllers with various devices has been a little over-complicated, requiring specific button combos to be pressed while the gamepad’s being powered on so the buttons are properly set up for a given device. (Switch vs. Android, etc.) The process is made easier on the Arcade Stick with dials for putting the controller in Switch or PC/Xbox modes, and a dial for mapping the joystick to the left stick, right stick, or directional pad inputs. But I would have definitely preferred labels that were a little more explanatory.

Switching between the S (Switch) and X (PC/Xbox) modes causes the light-up labels on the Arcade Stick’s buttons to automatically change making it slightly easier to adapt to different button layouts if you’re regularly using it with multiple devices.

A compartment on the back of the 8BitDo Arcade Stick hides a USB-C charging port and an included 2.4 GHz USB dongle.
Photo: Andrew Liszewski / Gizmodo
If gamers feel a wireless Bluetooth connection introduces too much lag, the included 2.4 GHz USB dongle offers wireless gameplay with less lag, but the Arcade Stick can also be plugged right into a console or a PC using a USB cable.
Photo: Andrew Liszewski / Gizmodo

There are three ways to connect the Arcade Stick to your devices. Bluetooth is the most compatible, but some gamers feel that introduces too much lag and reduces their competitive edge. As a wireless alternative with less lag, a compartment on the back of the gamepad hides an included 2.4 GHz USB dongle which works with the Switch, PCs, and most devices with a USB port. Alternately, a USB-C cable can be used to physically tether the Arcade Stick to a device for lag-free gaming, while the USB-C port is also used to charge the gamepad’s battery which promises 30 hours of gameplay on Bluetooth, or 40 hours when using the 2.4 GHz dongle.

What really sets 8BitDo’s gamepads and controllers apart from the competition now, and the reason I tend to recommend them to people so often is the company’s Ultimate Software. It was first made available for the SN30 Pro+ in 2019, followed by the SN30 Pro for Xbox released earlier this year, and is now compatible with the Arcade Stick. It’s a desktop app that allows these select 8BitDo controllers to be completely customized, including remapping button functionality, creating macros, and even tweaking the sensitivity of analog joysticks.

For the Arcade Stick, the level of customizability in the Ultimate Software is limited, and it mostly allows for the red action buttons to be remapped, and custom combos to be programmed into the gamepad’s P1 and P2 buttons. (Yes, you can make either one easily execute the Konami code with a single tap.) This expands the functionality of the Switch vs. PC mode dials for gamers who prefer a very specific button layout that differs from the two defaults.

Is the 8BitDo Arcade Stick worth the $90 investment for most gamers? No. Most are better off going with the $50 SN30 Pro+ which offers the same functionality and customizability as the Arcade Stick with the addition of analog joysticks, vibration feedback, and motion controls. The Arcade Stick is a very basic controller by comparison and is targeted at gamers looking for a very specific arcade-like experience. Without an analog stick, it’s all but useless for any game that came after the 16-bit era.

That being said, 8BitDo’s Arcade Stick is a very satisfying alternative to a compact gamepad for classic beat-’em-ups like Teenage Mutant Ninja Turtles: Turtles in Time. I’m not particularly fond of fighting games, which is where arcade-style gamepads have found their niche, but almost right out of the box I understood why many gamers still prefer playing with this kind of hardware, and why this one tiny aspect of the arcade experience refuses to die.