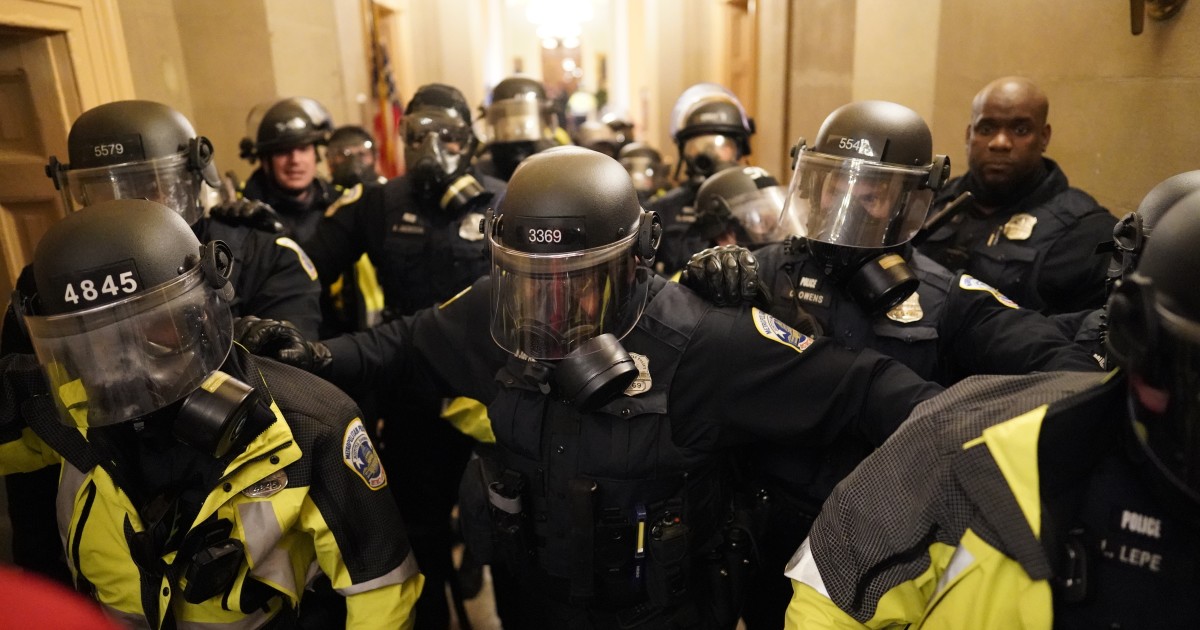 Early images of the U.S. Capitol siege captured the extremism of intruders as the insurrection was broadcast live. There was a bare-chested man in a furry headdress, another wearing an anti-Semitic sweatshirt, a third carrying a Confederate flag.

But the reality of the Jan. 6 attack, captured in affidavits and court filings in dozens of criminal cases, is that the crowd included not just fringe radicals but also a broad cross section of President Trump’s supporters — people with office jobs, kids and mortgages, and otherwise respectable public reputations.

Among those identified and charged with crimes by law enforcement as participating in the insurrection were municipal employees, former members of the military, social media influencers, police officers and a school therapist. Also charged were a data analytics company’s chief executive and a two-time Olympic gold medalist swimmer from USC.

They came from across the country. A West Virginia state delegate livestreamed himself alongside the rioters. Houston Police Chief Art Acevedo said one of his officers — who resigned Thursday — had “penetrated” the Capitol building and was expected to face federal charges soon. Two Virginia police officers have been charged with violent entry and disorderly conduct on Capitol grounds.

Law enforcement officials are alarmed by the varied backgrounds of the pro-Trump intruders and say it can be difficult to prevent attacks and uncover dangerous motives when extremists hide behind the veneer of normality. The crowd that stormed the Capitol complex as lawmakers certified President-elect Joe Biden’s victory reflected how deeply the false claims over the election results penetrated psyches of Trump voters, not just those of known conspiracy theorists.

Current and former law enforcement officials said a large chunk of Trump supporters so fervently believe the election was stolen that they are likely to prove to be security risks for months to come. As the assault on the Capitol showed, they said, pro-Trump extremists and loyalists may believe that violence is their only recourse.

Javed Ali, a former senior director for counter-terrorism at the National Security Council, said the attack on the Capitol revealed how many people have become radicalized and are willing to act on those beliefs.

“How many people stormed the Capitol? Thousands? Several hundred?” he said. “There are people who are willing to cross these lines, physically and legally, and have the potential to do serious harm.”

With the carnage of Jan. 6 still fresh, Washington and state capitols are girding for more possible violence. Biden’s inauguration is scheduled for Wednesday, and officials have continued to tighten security throughout downtown Washington. More fencing was erected around the National Mall, which remained open to pedestrians but effectively blocked to vehicle traffic. Metal security barriers stretched for blocks around the Capitol, cutting off the building and the surrounding offices from public access. Heavy transport trucks sat in the middle of some roads.

A team of National Guard troops marched past the Supreme Court, and others walked the hallways with rifles. Congressional staff members needed to show identification at checkpoints where they’re normally able to walk freely.

FBI Director Christopher A. Wray warned Thursday of armed protests in coming days, saying his agents were “seeing an extensive amount of concerning online chatter about a number of events surrounding the inauguration.”

The director, speaking at a security briefing with other government leaders, added that his agents were working “to distinguish what’s aspirational versus what’s intentional.”

That such a cross section of society joined the assault on the Capitol doesn’t surprise experts. Nina Jankowicz, a disinformation expert at the nonpartisan Wilson Center, said people of all backgrounds are being “indoctrinated” and “sucked into” believing conspiracy theories on social media platforms where algorithms suggest increasingly extreme content to users. And she fears their false belief that the election was stolen will persist and inspire more violence.

“This feeling of injustice, this feeling that the system is rigged, will inspire disengagement with democracy,” she said.

Ali, the counter-terrorism expert, said it’s unclear what will happen next for the ecosystem of people who attacked the Capitol. Although many were united in believing that the election was stolen, they come from a variety of backgrounds and have nuanced, varied impressions of the alleged ways in which they and their party have been wronged.

“There are all these other grievances that people are going to latch on to,” Ali said. “It’s not rigid, it’s not firm. It’s very broad and diffuse.”

William Pepe, a transit worker from New York, was allegedly captured on camera inside the Capitol. Federal investigators said they later determined the mechanical laborer had used his sick leave to travel to Washington, authorities wrote in court papers. The MTA has suspended Pepe, who has been federally charged with knowingly entering a restricted building.

Christine Priola, a former therapist for the Cleveland Metropolitan School District, was maskless and smiling when she was photographed in the Senate chamber, standing next to a man in Vice President Mike Pence’s seat, authorities said.

When authorities searched Priola’s home, they found the clothes she wore in the Capitol as well as a sign she had carried bearing a slogan inspired by a popular conspiracy theory, federal investigators said.

A Virginia police officer, Thomas Robertson, was identified by investigators as one of those who stormed into the building, court records show. He told authorities he did nothing illegal because the Capitol Police welcomed him into the building. But on social media, officials say, he had acknowledged his role in storming the complex.

“The right IN ONE DAY took the f***** U.S. Capitol. Keep poking us,” Robertson wrote, according to U.S. Capitol Police Special Agent Vincent Veloz in a court filing.

In a separate federal case, an FBI agent wrote, authorities were able to identify Klete Keller, a 38-year-old Olympic gold medalist, as having participated in rioting because he was wearing a jacket emblazoned with the U.S. Olympic Team patch. Keller was charged with knowingly entering a restricted building, disorderly conduct and impeding law enforcement.

None of those charged could be reached for comment.

Experts said the Capitol attack, and the court cases recounting it in detail, provide a blueprint for the types of threats law enforcement should be preparing for — both around the inauguration and moving forward.

Others strutted as if in cosplay, and some did their part in the insurrection simply by being in the building — a crime in and of itself.

Federal law enforcement officials also have detailed more serious threats they discovered that day — pipe bombs outside the Republican National Committee and Democratic National Committee. Neither exploded. They also found homemade Molotov cocktails filled with gasoline and melted Styrofoam, which they said can act like napalm, in a red pickup truck parked near the complex.

“When you have such a large group and among that group are conspiracy theorists, far-right extremists, unlawful militia members and people who just honestly and sincerely believe that there might have been election fraud, then people at the extreme end of that have a lot of sway with pulling over, almost even radicalizing the more — this is going to sound like an oxymoron — the more moderate extremists of the group,” she said.