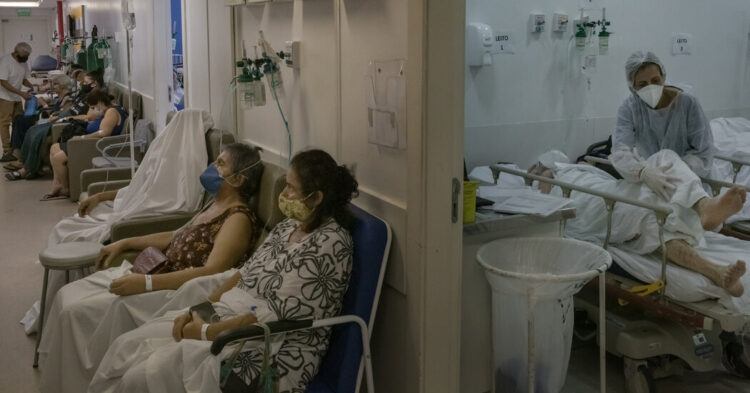 The virus has killed more than 300,000 people in Brazil, its spread aided by a highly contagious variant, political infighting and distrust of science.

PORTO ALEGRE, Brazil — The patients began arriving at hospitals in Porto Alegre far sicker and younger than before. Funeral homes were experiencing a steady uptick in business, while exhausted doctors and nurses pleaded in February for a lockdown to save lives.

But Sebastião Melo, Porto Alegre’s mayor, argued there was a greater imperative.

“Put your life on the line so that we can save the economy,” Mr. Melo appealed to his constituents in late February.

Now Porto Alegre, a prosperous city in southern Brazil, is at the heart of a stunning breakdown of the country’s health care system — a crisis foretold.

More than a year into the pandemic, deaths in Brazil are at their peak and highly contagious variants of the coronavirus are sweeping the nation, enabled by political dysfunction, widespread complacency and conspiracy theories. The country, whose leader, President Jair Bolsonaro, has played down the threat of the virus, is now reporting more new cases and deaths per day than any other country in the world.

“We have never seen a failure of the health system of this magnitude,” said Ana de Lemos, the executive director of Doctors Without Borders in Brazil. “And we don’t see a light at the end of the tunnel.”

On Wednesday, the country surpassed 300,000 Covid-19 deaths, with roughly 125 Brazilians succumbing to the disease every hour. Health officials in public and private hospitals were scrambling to expand critical care units, stock up on dwindling supplies of oxygen and procure scarce intubation sedatives that are being sold at an exponential markup.

Intensive care units in Brasília, the capital, and 16 of Brazil’s 26 states report dire shortages of available beds, with capacity below 10 percent, and many are experiencing rising contagion (when 90 percent of such beds are full the situation is considered dire).

In Rio Grande do Sul, the state that includes Porto Alegre, the waiting list for intensive care unit beds doubled over the past two weeks, to 240 critically ill patients.

At Hospital Restinga e Extremo Sul, one of the main medical facilities in Porto Alegre, the emergency room has become a crammed Covid ward where many patients received care in chairs, for lack of a free bed. Last week, the military built a tent field hospital outside the main entrance, but hospital officials said the additional bed space is of little use for a medical staff stretched beyond its limit.

“The entire system is on the verge of collapse,” said Paulo Fernando Scolari, the hospital’s director. “People are coming in with more serious symptoms, lower oxygen levels, in desperate need of treatment.”

The breakdown is a stark failure for a country that, in past decades, was a model for other developing nations, with a reputation for advancing agile and creative solutions to medical crises, including a surge in H.I.V. infections and the outbreak of Zika.

Mr. Melo, who campaigned last year on a promise to lift all pandemic restrictions in the city, said a lockdown would cause people to starve.

“Forty percent of our economy, our labor force, is informal,” he said in an interview. “They’re people who need to go out and work in order to have something to eat at night.”

President Bolsonaro, who continues to promote ineffective and potentially dangerous drugs to treat the disease, has also said lockdowns are untenable in a country where so many people live in poverty. While several Brazilian states have ordered business shutdowns in recent weeks, there have been no strict lockdowns.

Some of the president’s supporters in Porto Alegre have protested business shutdowns in recent days, organizing caravans that stop outside of hospitals and blast their horns while inside Covid wards overflow.

Epidemiologists say Brazil could have avoided additional lockdowns if the government had promoted the use of masks and social distancing and aggressively negotiated access to the vaccines being developed last year.

Instead, Mr. Bolsonaro, a close ally of former President Donald J. Trump, called Covid-19 a “measly flu,” often encouraged large crowds and created a false sense of security among supporters by endorsing anti-malaria and anti-parasite drugs — contradicting leading health officials who warned that they were ineffective.

Last year, Mr. Bolsonaro’s government took a pass on Pfizer’s offer of tens of millions of doses of its Covid-19 vaccine. Later, the president celebrated setbacks in clinical trials for CoronaVac, the Chinese-made vaccine that Brazil came to largely rely on, and joked that pharmaceutical companies would not be held responsible if people who got newly developed vaccines turned into alligators.

“The government initially dismissed the threat of the pandemic, then the need for preventive measures, and then goes against science by promoting miracle cures,” said Natália Pasternak, a microbiologist in São Paulo. “That confuses the population, which means people felt safe going out in the street.”

Terezinha Backes, a 63-year-old retired shoemaker living in a municipality on the outskirts of Porto Alegre, had been exceedingly careful over the past year, venturing out only when necessary, said her nephew, Henrique Machado.

But her 44-year-old son, a security guard tasked with taking the temperature of people entering a medical facility, appears to have brought the virus home early this month.

Ms. Backes, who had been in good health, was taken to a hospital on March 13 after she began having trouble breathing. With no beds to spare, she was treated with oxygen and an IV in the hallway of an overflowing wing. She died three days later.

“My aunt was not given the right to fight for her life,” said Mr. Machado, 29, a pharmacist. “She was left in a hallway.”

Her body was among the scores that have made March the busiest month ever at a funeral home owned by a family friend, Guaraci Machado. Sitting in his office on a recent afternoon, Mr. Machado said he has been struck by the number of young Covid-19 patients who have been brought to his facility in coffins over the past few weeks.

Yet Mr. Machado, 64, who took his face mask off halfway through an interview, said he’s opposed to lockdowns or business closures. From the beginning, he said, he has been convinced that the virus was created by China so it could sell medical supplies around the world, and ultimately develop a profit-making vaccine.

When he had Covid-19 in June of last year, Mr. Machado said he took the anti-malaria drug championed by the president, hydroxychloroquine, which he credited with “keeping me alive.”

Mr. Machado will be eligible in the coming weeks for a Covid-19 vaccine in Brazil. But he won’t get one even if he were “being beaten with a stick,” Mr. Machado said, noting that he recently read online that vaccines are more lethal than the virus.

Such conspiracy theories about Covid-19 vaccines have spread widely on social media, including on WhatsApp and Facebook. A recent public opinion poll by the firm IPEC found that 46 percent of respondents believed at least one widely disseminated falsehood about vaccines.

Mistrust of vaccines and science is new in Brazil and a dangerous feature of the Bolsonaro era, said Dr. Miguel Nicolelis, a Brazilian neurologist at Duke University who led a coronavirus task force in the country’s northeast last year.

“In Brazil, when the president of the republic speaks, people listen,” Dr. Nicolelis said. “Brazil never had an anti-vaccine movement — ever.”

But many hard-core supporters of Mr. Bolsonaro, who retains the support of roughly 30 percent of the electorate, argue that the president’s instincts on the pandemic have been sound.

Geraldo Testa Monteiro, a retired firefighter in Porto Alegre, praised the president as he and his family were preparing to bury his sister, Maria de Lourdes Korpalski, 70, who died of Covid-19 last week.

In recent months, Mr. Monteiro said he began taking the anti-parasite drug ivermectin as a preventive measure. The drug is part of the so-called Covid kit of drugs, which also includes the antibiotic azithromycin and the anti-malaria drug hydroxychloroquine. Mr. Bolsonaro’s health ministry has endorsed their use.

Leading medical experts in Brazil, the United States and Europe have said those drugs are not effective to treat Covid-19 and some can have serious side effects, including kidney failure.

“Lies,” Mr. Monteiro, 63, said about the scientific consensus on the Covid kit. “There are so many lies and myths.”

He said medical professionals have sabotaged Mr. Bolsonaro’s plan to rein in the pandemic by refusing to prescribe those drugs more decisively at the early stages of illness.

“There was one solution: to listen to the president,” he said. “When people elect a leader it is because they trust him.”

The mistrust and the denials — and the caravans of Bolsonaro supporters blasting their horns outside hospitals to protest pandemic restrictions — are crushing for medical professionals who have lost colleagues to the virus and to suicide in recent months, said Claudia Franco, the president of the nurses union in Rio Grande do Sul.