Home General A racial slur, a viral video, and a reckoning

A racial slur, a viral video, and a reckoning 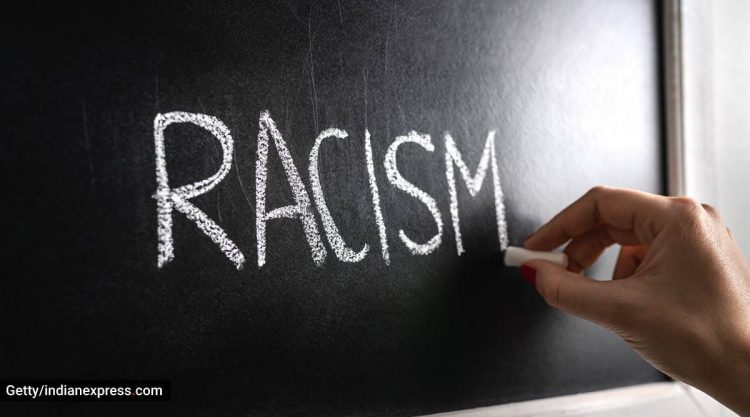 Jimmy Galligan was in history class last school year when his phone buzzed with a message. Once he clicked on it, he found a three-second video of a white classmate looking into the camera and uttering an anti-Black racial slur.

The slur, he said, was regularly hurled in classrooms and hallways throughout his years in the Loudoun County school district. He had brought the issue up to teachers and administrators, but, much to his anger and frustration, his complaints had gone nowhere.

So he held on to the video, which was sent to him by a friend, and made a decision that would ricochet across Leesburg, Virginia, a town named for an ancestor of Confederate Gen. Robert E. Lee and whose school system had fought an order to desegregate for more than a decade after the Supreme Court’s landmark ruling.

“I wanted to get her where she would understand the severity of that word,” Galligan, 18, whose mother is Black and father is white, said of the classmate who uttered the slur, Mimi Groves. He tucked the video away, deciding to post it publicly when the time was right.

Groves had originally sent the video, in which she looked into the camera and said, “I can drive,” followed by the slur, to a friend on Snapchat in 2016, when she was a freshman and had just gotten her learner’s permit. It later circulated among some students at Heritage High School, which she and Galligan attended, but did not cause much of a stir.

Galligan had not seen the video before receiving it last school year, when he and Groves were seniors. By then, she was a varsity cheer captain who dreamed of attending the University of Tennessee, Knoxville, whose cheer team was the reigning national champion. When she made the team in May, her parents celebrated with a cake and orange balloons, the university’s official color.

The next month, as protests were sweeping the nation after the police killing of George Floyd, Groves, in a public Instagram post, urged people to “protest, donate, sign a petition, rally, do something” in support of the Black Lives Matter movement.

“You have the audacity to post this, after saying the N-word,” responded someone whom Groves said she did not know.

Her alarm at the stranger’s comment turned to panic as friends began calling, directing her to the source of a brewing social media furor. Galligan, who had waited until Groves had chosen a college, had publicly posted the video that afternoon. Within hours, it had been shared to Snapchat, TikTok and Twitter, where furious calls mounted for the University of Tennessee to revoke its admission offer.

By that June evening, about a week after Floyd’s killing, teenagers across the country had begun leveraging social media to call out their peers for racist behavior. Some students set up anonymous pages on Instagram devoted to holding classmates accountable, including in Loudoun County.

The consequences were swift. Over the next two days, Groves was removed from the university’s cheer team. She then withdrew from the school under pressure from admissions officials, who told her they had received hundreds of emails and phone calls from outraged alumni, students and the public.

“They’re angry, and they want to see some action,” an admissions official told Groves and her family, according to a recording of the emotional call reviewed by The New York Times.

Groves was among many incoming freshmen across the country whose admissions offers were revoked by at least a dozen universities after videos emerged on social media of them using racist language.

In one sense, the public shaming of Groves underscores the power of social media to hold people of all ages accountable, with consequences at times including harassment and both online and real-world “cancellation.” But the story behind the backlash also reveals a more complex portrait of behavior that for generations had gone unchecked in schools in one of the nation’s wealthiest counties, where Black students said they had long been subjected to ridicule. “Go pick cotton,” some said they were told in class by white students.

“It was just always very uncomfortable being Black in the classroom,” said Muna Barry, a Black student who graduated with Groves and Galligan. Once, during Black History Month, she recalled, gym teachers at her elementary school organized an “Underground Railroad” game, where students were told to run through an obstacle course in the dark. They had to begin again if they made noise.

The use of the slur by a Heritage High School student was not shocking, many said. The surprise, instead, was that Groves was being punished for behavior that had long been tolerated.

Leesburg, the county seat of Loudoun County, lies just across the Potomac River from Maryland, about an hour’s drive from Washington. It was the site of an early Civil War battle, and slave auctions were once held on the courthouse grounds, where a statue of a Confederate soldier stood for more than a century until it was removed in July.

The Loudoun County suburbs are among the wealthiest in the nation, and the schools consistently rank among the top in the state. Last fall, according to the Virginia Department of Education, the student body at Heritage High was about half white, 20% Hispanic, 14% Asian American and 8% Black, with another 6% of mixed race.

In interviews, current and former students of color described an environment rife with racial insensitivity, including casual uses of slurs.

A report commissioned last year by the school district documented a pattern of school leaders ignoring the widespread use of racial slurs by students and teachers, fostering a “growing sense of despair” among students of color, some of whom faced disproportionate disciplinary measures compared with white students.

“It is shocking the extent to which students report the use of the N-word as the prevailing concern,” the report said. School system employees also had a “low level of racial consciousness and racial literacy,” while a lack of repercussions for hurtful language forced students into a “hostile learning environment,” it said.

In the wake of the report’s publication, the district in August released a plan to combat systemic racism. The move was followed by a formal apology in September for the district’s history of segregation.

Heritage High School officials did not respond to interview requests.

Galligan recalled being mocked with a racial slur by students and getting laughed at by a white classmate after their senior-year English teacher played an audio recording of the 1902 novella “Heart of Darkness” that contained the slur.

During that school year, Galligan said, the same student made threatening comments about Muslims in an Instagram video. Galligan showed the clip to the school principal, who declined to take action, citing free speech and the fact that the offensive behavior took place outside school. “I just felt so hopeless,” Galligan recalled.

Groves said the video began as a private Snapchat message to a friend. “At the time, I didn’t understand the severity of the word or the history and context behind it because I was so young,” she said in a recent interview, adding that the slur was in “all the songs we listened to, and I’m not using that as an excuse.”

Groves, who just turned 19, lives with her parents and two siblings in River Creek, a predominantly white and affluent gated community built around a golf course. On a recent day, she sat outside on the deck with her mother, Marsha Groves, who described how the entire family had struggled with the consequences of the very public shaming.

“It honestly disgusts me that those words would come out of my mouth,” Mimi Groves said of her video. “How can you convince somebody that has never met you and the only thing they’ve ever seen of you is that three-second clip?”

Groves said racial slurs and hate speech were not tolerated by her parents, who run a technology company and had warned their children to never post anything online that they would not say in person or want their parents and teachers to read.

Once the video went viral, the backlash was swift and relentless. A photograph of Groves, captioned with a racial slur, also began circulating online, but she and her parents say someone else wrote it to further tarnish her reputation. On social media, people tagged the University of Tennessee and its cheer team, demanding her admission be rescinded. Some threatened her with physical violence if she came to the university campus. The next day, local media outlets in Virginia and Tennessee published articles about the uproar.

For the University of Tennessee, the outrage over Groves followed a string of negative publicity over racist incidents at its flagship campus in Knoxville. Last year, Snapchat photos of students wearing blackface and mocking the Black Lives Matter movement went viral shortly after a student was suspended by her sorority for referring to Black people with a slur in an online video. In 2018, swastikas and other hateful messages were painted on campus, months after white supremacists hosted an event during Black History Month.

Public universities are limited in their ability to expel students for offensive language. They have more leeway with incoming students, who are not yet enrolled, though many state schools try to avoid officially revoking admissions offers over speech issues.

The day after the video went viral, Groves tried to defend herself in tense calls with the university. But the athletics department swiftly removed Groves from the cheer team. And then came the call in which admissions officials began trying to persuade her to withdraw, saying they feared she would not feel comfortable on campus.

The university declined to comment about Groves beyond a statement it issued on Twitter in June, in which officials said they took seriously complaints about racist behavior.

Groves’ parents, who said their daughter was being targeted by a social media “mob” for a mistake she made as an adolescent, urged university officials to assess her character by speaking with her high school and cheer coaches. Instead, admissions officials gave her an ultimatum: withdraw or the university would rescind her offer of admission.

“We just needed it to stop, so we withdrew her,” said her mother said, adding that the entire experience had “vaporized” 12 years of her daughter’s hard work. “They rushed to judgment, and unfortunately it’s going to affect her for the rest of her life.”

In the months since Galligan posted the video, he has begun his freshman year at Vanguard University in California, and Groves has enrolled in online classes at a nearby community college. Although they had been friendly earlier in high school, they have not spoken about the video or the fallout.

At home, Groves’ bedroom is festooned by a collection of cheer trophies, medals and a set of red pompoms — reminders of what could have been. Her despair has given way to resignation. “I’ve learned how quickly social media can take something they know very little about, twist the truth and potentially ruin somebody’s life,” she said.

Since the racial reckoning of the summer, many white teenagers, when posting dance videos to social media, no longer sing along with the slur in rap songs. Instead, they raise a finger to pursed lips. “Small things like that really do make a difference,” Galligan said.