A resplendent Tank Bund all set to captivate Hyderabadis 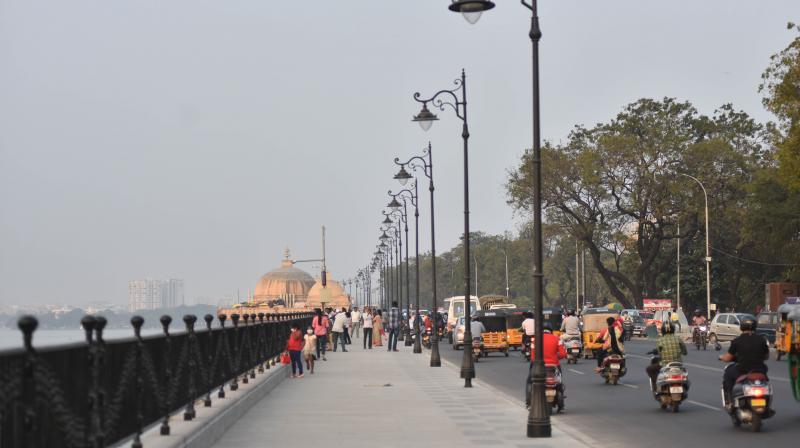 HYDERABAD: A couple of decades after then Chief Minister N.T. Rama Rao took up measures to improve Tank Bund and its surroundings, municipal administration and urban development minister K.T. Rama Rao has embarked on a major beautification programme on the 2.2-km stretch of arterial road.

Under his leadership, the Hyderabad Metropolitan Development Authority (HMDA) has laid flamed granite stones on the footpaths at an estimated cost of Rs14.5 crore. This apart, the municipal authority set up specially-designed cast iron railing, grills, and aligned designer lamp posts resembling heritage lighting to enhance its aesthetic look.

Also, street furniture, kiosks, and decorative lightings are being set up at a cost of Rs 12.5 crore. Overall the project cost is estimated around Rs 38 crore

During N.T. Rama Rao’s tenure, road widening and beautification of the Tank Bund took place in 1987-88 with the installation of statues of 33 renowned personalities, fountains and coloured lights. He was keen on installing the imposing 58-foot Buddha statue on the ‘Rock of Gibraltar’ in the middle of the Hussainsagar.

“NTR got that idea when he visited New York and saw the Statue of Liberty on Staten Island”, said a senior HMDA official.

The Buddha statue was hewn out of a white granite rock, weighing 450 tonnes. It was carved by 200 sculptors for two years. The statue was transported to Hyderabad in November 1988. After initial problems, it was erected on April 12, 1992, on a red lotus pedestal.

K.T. Rama Rao has instructed officials to take up the Tank Bund beautification works and complete them on a war-footing. The electrical cables run through ducts and will leave the pavement undisturbed. The loose ends are being capped to prevent the cables from hanging outside. To avoid stagnation, a proper drain system has been put in place.

Terming it as the first phase of development, the HMDA official said that the municipal authority would construct a boardwalk connecting Sagar Park, Boats Club, Buddha Bhavan and Lumbini Park on the shoreline of Hussainsagar. This apart, the entire shoreline will get a complete makeover with state-of-the-art night bazaar beside Sanjeevaiah Park, Necklace Road and Buddha Bhavan.

“The bazaar will have 150 to 200 shops, and would have boardwalks with landscapes in between, spacious sitting arenas, parking facilities in compliance with a Supreme Court Committee’s recommendations. The 1.3-km stretch would be transformed into a vibrant tourist attraction,” the official said.

It will have bus bays, bus stands and structures on the shoreline that would be restricted to give a complete heritage look.

A visitor, Prashanth, said at Tank Bund on Saturday, “It is very good on the part of the government to develop a tourist place like Tank Bund. The makeover gives a heritage feel.”

However, Prashanth wondered “Will the sophisticated beautification works be damaged during Ganesh immersion?”

Aditya, another visitor said the work is progressing at a good pace. “The makeover has completely changed the look and feel of the areas. I’m sure tourists or Hyderabadis will have a pleasant experience once all the developmental works are completed”, he said.