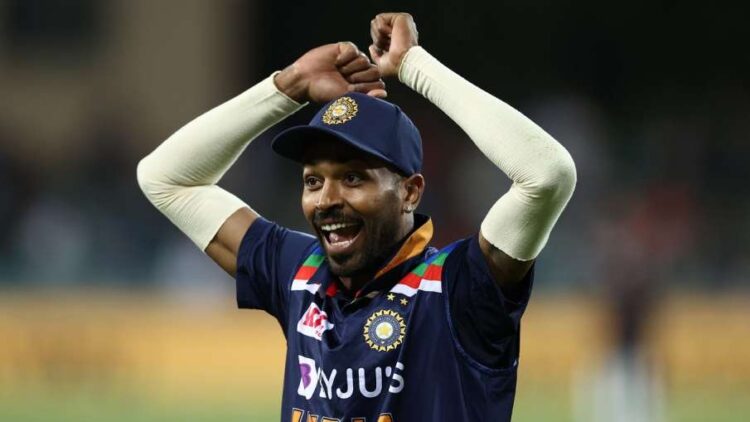 Aakash Chopra believes Hardik Pandya will breach the three-figure mark in ODI cricket if he is sent up the order and gets enough balls to face. He has 1 ton in Tests but is yet to score 100 in ODIs and T20Is.

The junior Pandya played a blazing 64-run knock-off just 44 deliveries in the series-deciding final 3rd ODI against England. It helped Team India post a decent score of 329 runs, which eventually proved enough for the visitors.

During a discussion on Star Sports, Aakash Chopra observed Hardik Pandya is playing like a specialist batsman and a century is not beyond his reach. In the England limited-overs series, Hardik Pandya amassed 100 runs in 3 ODIs averaging 33.33 and scored 86 runs in 5 T20Is averaging 28.67 but his strike rate was 144.93-second best after Rishabh Pant in ODIs and 140.98 in T20Is.

“Hardik Pandya seems like a proper batsman to me now, honestly. I don’t see him as an all-rounder or finisher at all. If you bat him up the order, he will score a century as well if he gets enough balls,” said Chopra.

The cricketer-turned-commentator lauded Hardik Pandya for the hard yards he has put in to perfect his strokes.

“If you see his shots today, nine out of ten times you will see cricketing shots and wherever he tries to hit the ball, he has prepared so well for those shots that his execution in amazingly good,” added Chopra.

Hardik Pandya’s enterprising knock was studded with five boundaries and four hits over the ropes.

After the 5th T20I, it was Aakash Chopra who opined that Hardik Pandya deserves to get a longer hit in the middle when asked about the latter’s promotion up the batting order in the final T20I. Hardik Pandya was sent in to bat at No.7 for the majority of the T20I series against England, as India opted to play an additional batsman.  He hasn’t bowled much following his back surgery in 2019 to not risk aggravating his lower back pain.

“Four wickets had fallen at one time. When KL Rahul got out, it seemed the innings had floundered. The way he batted after that, he has the strength, he updated his batting software when he was injured. He has started playing like a proper batsman,” Aakash Chopra added.

The 43-year-old concluded by stating that Hardik Pandya employs a specific tactic against pacers and his dismissal at an inopportune moment had a massive adverse impact on Team India’s final score.

“There is a specific game plan that he will go deep inside the crease against fast bowlers and keep his weight forward despite that, so that he is not off-position while playing the shots. He has been consistently scoring runs, whether it is spin or fast bowling and was actually upset that he got out at the wrong time. If he had kept on playing, 390 was also possible,” Aakash Chopra concluded.

Hardik Pandya was dismissed off the last ball of the 39th over, with the India score reading 276/6. Despite few lusty blows from Shardul Thakur, the hosts could add only 53 runs in the last eleven overs and even got bowled out at 329 with ten deliveries to spare.

Hardik Pandya was arguably one of India’s standout performers in the limited-overs leg against Australia. He hit 2 scores in the 90s in India’s otherwise poor performance in the ODIs. In the subsequent T20Is that followed, he scored 78 runs in three innings at an average of 39 and at a strike-rate of 156.00 which helped India chase down targets when odds were stacked against the team.

RELATED:  Mia Khalifa Questions Priyanka Chopra Jonas' Silence On Farmers’ Protest, Says, “Is She Going To Chime In At Any Point”?