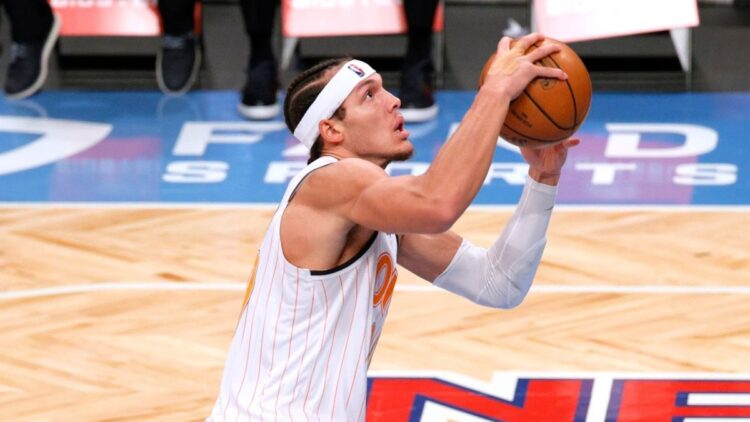 Aaron Gordon has a new team and with it, a new jersey number. Instead of the double zeros, the new Nugget will rock No. 50.

You may not make much of a fuss about an athlete’s number, who does anymore anyway? But Gordon says he’s just looking for a “fresh start” in the Mile-High City. He also wants to remind you that he was robbed in the 2016 and 2020 dunk contests.

In his eyes, he should’ve gotten a perfect 50 on the final dunks. Alrighty then.

I guess you can call No. 50 petty or revengeful, too, however you want to look at the situation.

At the 2020 All-Star weekend, Gordon said he did “five straight 50’s” in his matchup with Derrick Jones Jr. And in a press conference after the final round, Gordon told reporters “I feel like I should have two trophies.”

Weeks later, he released a diss track called “9 out of 10” about a judge (Dwyane Wade) who didn’t give him a perfect score. “I probably could’ve had 100 more bars on the topic,” he told the folks at First Take regarding his song, “but I ain’t need to go on and on. I felt like I said what I needed to say and now it’s cool to move on.”

That was in April. Since then, everyone not named Aaron Gordon has moved on.

Months later, he was the star of a documentary short called Mr. 50 in reference to… you know what by now.

Look, Gordon was robbed (at least in that 2020 competition). But we’re still talking about this? I mean, don’t get me wrong, it was one of the best dunk competitions I’ve seen in recent memory. And I would hope he actually comes back to participate in another one. After last year’s snub, he said he wouldn’t participate in any more dunk contests.

I guess something’s gotta motivate a pro athlete. For Gordon, it’s No. 50. A number that’s finally his.