Home EntertainmentGossips Aayush Sharma beams with joy as his kids Ahil and Ayat visit him on sets of Salman Khan starrer Antim; Pics

Aayush Sharma beams with joy as his kids Ahil and Ayat visit him on sets of Salman Khan starrer Antim; Pics 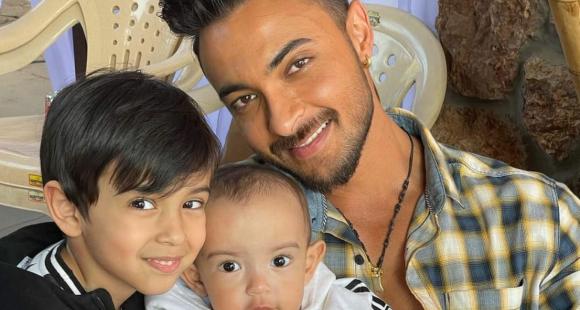 Aayush Sharma, who is currently busy shooting for his upcoming film Antim: The Final Truth, recently took to his Instagram stories to share an adorable picture with his munchkins Ahil and Ayat who gave him a surprise visit on the sets.

Aayush Sharma beams with joy as his kids Ahil and Ayat visit him on sets of Salman Khan starrer Antim; Pics

Aayush Sharma has been making headlines ever since his first look from the upcoming film Antim: The Final Truth has been unveiled. Last year in December the first look teaser was released and it left everyone highly impressed. While it showed Salman Khan as a Sikh cop, Aayush was seen in the role of a fierce gangster. The shooting of the film is going on in full swing and the actors are currently busy filming the same. Amid this, Aayush got a cute surprise as his little munchkins Ahil and Ayat visit him on the sets.

The Loveyatri star also shared a glimpse of it on his social media handles. Taking to his Instagram stories, Aayush shared an adorable picture with his kids wherein he is seen posing with them. His wife Arpita Khan also posed two cute photos that have sent the internet into a meltdown. The first picture, which shows Aayush holding his baby girl in his arms, was captioned as, “Daddy’s Little Girl @aaysharma.” Another picture read as, “Precious.” Notably, the adorable clicks have left everyone swooning including, actress Shilpa Shetty Kundra and Katrina Kaif”s sister Isabelle. The Baazigar star commented, “Awwwwwww,” followed by heart emoticons.

Take a look at the posts below: Meanwhile, Antim: The Final Truth has been directed by Mahesh Manjrekar and is said to be an official adaptation of the Marathi film Mulshi Pattern.  To note, Varun Dhawan has been roped in for a special Ganpati song in the film. Confirming the same, a source close to the development has told Pinkvilla that it will “be an out and out Ganpati dance number” wherein Salman and Varun will be seen shaking a leg together.

“It’s a late-night shoot for the two actors and will be canned at a studio in Mumbai over the weekend. Even Aayush is expected to be a part of the song,” the source said.

Also Read: Salman Khan plans to wrap up Antim by mid Feb; Moves on to Tiger 3 from March