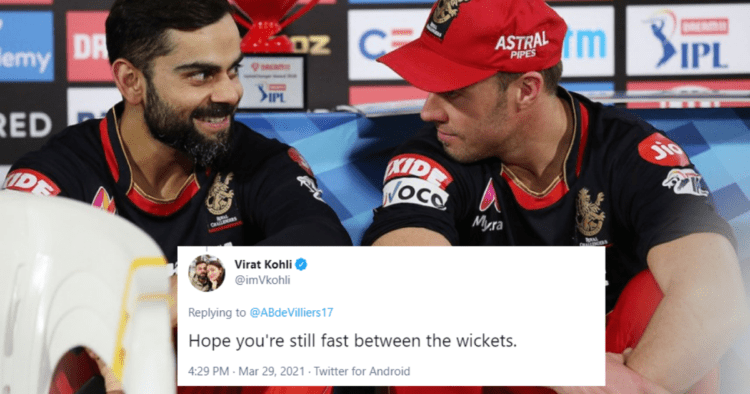 AB De Villiers is all set to join Royal Challengers Bangalore squad for IPL 2021. He is on his way to India and is eagerly waiting to join the franchise. Meanwhile, Virat Kohli is just fresh off leading India in an ODI series win over England. He is on a break before entering a new quarantine for the IPL 2021. The franchise is yet to win an IPL title and like every year, this year too they have the team to do it.

“Loving the form @imVkohli … I’m all packed to join the team” tweeted AB De Villiers just before he left for India. Kohi is back in form in the knick of time for his IPL franchise and along with De Villiers the two are the batting pillars for his franchise.

Loving the form @imVkohli .. I’m all packed to join the team pic.twitter.com/6rBIV3T3EH

Meanwhile seeing AB De Villiers’s message, Virat Kohli replied back to it saying that he hopes that the South African superstar can still run as fast as he did in his prime. “Hope you’re still fast between the wickets” wrote Kohli.

AB De Villiers was quick to respond to it by challenging Kohli for a race. “Let’s race tomorrow to find out” said De Villiers.

Let’s race tomorrow to find out

The two prime members of the RCB squad have been trying o win an IPL trophy for RCB since De Villiers joined the franchise in 2011. Kohli have been with the side since the very first season in 2008. Meanwhile, as per reports in ESPN Cricinfo, Kohli will join the RCB squad on April 1. He will undergo a seven-day quarantine after that.

He has a few milestones to get to in the new season for his side. He will be the first RCB player to play 200 IPL games. He is inching closer to 6000 IPL runs and 10000 overall T20 runs. RCB will play their matches in Chennai, Mumbai, Ahmedabad and Kolkata. The season starts from April 9 and the final will be played at the Narendra Modi Stadium on May 30.