Home EntertainmentBollywood Abhishek Bachchan on his COVID-19 treatment: I was more filled with concern for my family than anything else

Abhishek Bachchan on his COVID-19 treatment: I was more filled with concern for my family than anything else 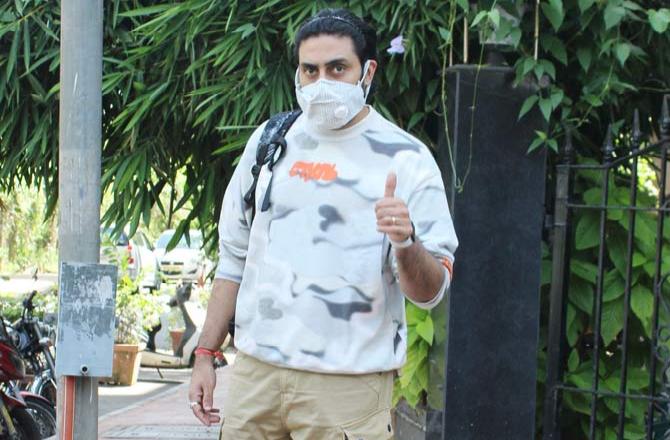 Abhishek Bachchan had a tough July when he was tested positive for coronavirus. It began when news of Amitabh Bachchan testing positive for COVID-19 broke out. Soon, Abhishek, his wife Aishwarya Rai Bachchan and daughter Aaradhya Bachchan tested positive for coronavirus and later admitted to Nanavati hospital for treatment. The mother-daughter duo was soon discharged after testing negative. While Big B was released on August 2, Abhishek underwent treatment for another week till he tested negative.

In an interview, Abhishek recalled the tough days and also spoke about his frame of mind post-COVID-19. Speaking to Hindustan Times, Abhishek said, “I was more filled with concern for my family than anything else. My father (Amitabh Bachchan), wife (Aishwarya) and daughter (Aradhya) got it too, thankfully the rest of the family did not. Obviously, you’re concerned about your loved ones and want them to be alright. There’d little that you can do I’ve to thank all the doctors and nurses who cared and worked so hard. I never actually had time to sit and contemplate. At that time, energies and concentration is all on your loves ones. After recuperating, I was back to work.”

“Anybody would be inhuman to say I had no apprehensions at the back of my mind. There’s a concern at the back of your mind, but it wasn’t for me, but who I’m getting back home to. I live with my entire family, my parents are of a certain age group. If I’m going to be all out day working, and come home in the evening, you get concerned about the people you’re interacting with”, he added.

Talking about how he is taking precautions during this COVID-19 pandemic, the actor said, “Somewhere, I have the confidence that if I’m going to take care, chances of anything untoward happening are reduced. I was very happy to get back to work. Ours is also an industry which literally came to a grinding halt, the content industry. We support thousands by giving them work, and a part of our industry is still shut, the exhibition sector. Cinemas have been reopened, but at a reduced capacity.”

Also Read: Abhishek Bachchan Shuts Down A Troll Who Called Him Slow

The Happy New Year actor recently completed his 20 years in Bollywood. Talking about achieving the milestone in an interview, he had said, “Contrary to popular belief, commercial film acting is not easy at all. To, convincingly and with utmost conviction do some of the things ‘commercial cinema’ demands is immensely challenging. But, now without the box-office barometer, directors and producers will possible cast a film on the merits of the script and its requirements in terms of casting. An actor’s life will still be decided every Friday. They will still be required to deliver -either at the box-office or deliver in terms of performance. At the end of the day, the audience will still decide and they are the final word”.

The actor is now gearing up for Ludo with Anurag Basu that will stream on Netflix, The Big Bull that will arrive on Disney Plus Hotstar, and Bob Biswas, co-produced by Shah Rukh Khan and Sujoy Ghosh. The Big Bull is touted to be based on the life of Harshad Mehta and the securities scam that happened in 1992. The story will narrate real-life events of the Indian financial market between 1990 and 2000 and will be directed by Kookie Gulati. Ajay Devgn bankrolls it. The Big Bull was originally supposed to release in cinemas on October 25 this year, but due to the Coronavirus pandemic that led to the lockdown, it’s now arriving on Disney Plus Hotstar soon.

The Big Bull will be followed by Bob Biswas. Its story revolves around the life of a fictional character Bob Biswas, who was seen as a special character in 2012 thriller, Kahaani. Bob is also known for his trademark line, “Nomoshkar, ek minute”. The storyline of Bob Biswas is keeping people intrigued and how. Abhishek, who plays Bob in the film, apparently had to go under insane physical transformation to match the looks of the Bob from Kahaani. Produced by Gauri Khan, Sujoy Ghosh and Gaurav Verma, the film is a Bound Script production presented by Red Chillies Entertainment.