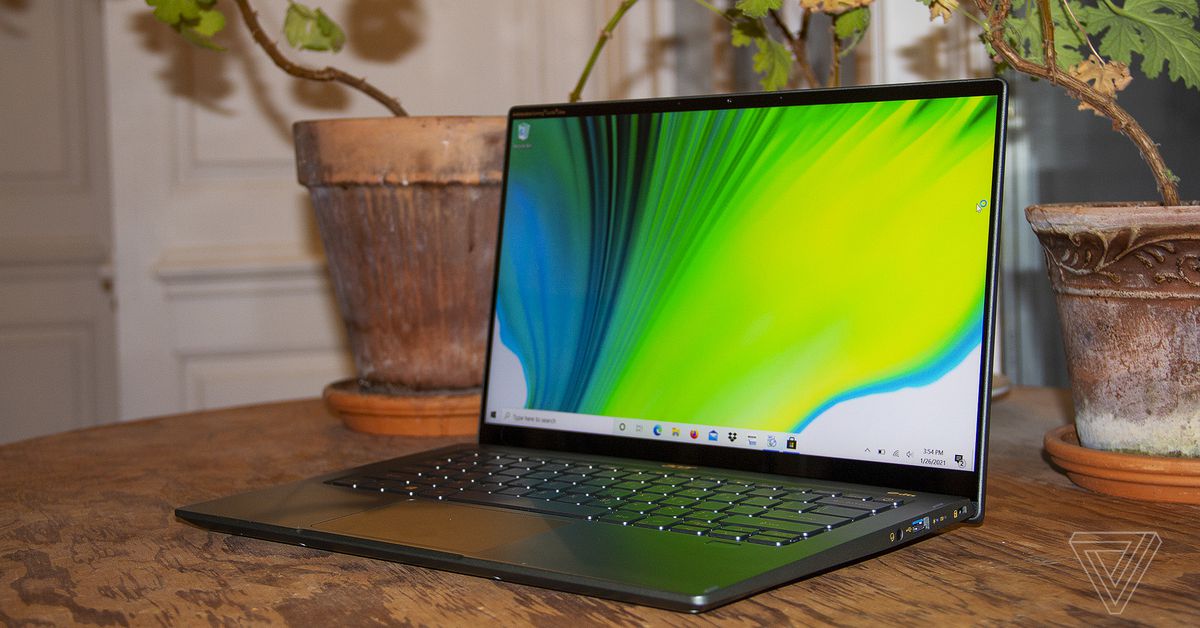 If you need a laptop that’s not just light, but among the lightest of the light, you’re looking for the 14-inch Acer Swift 5. At just 2.31 pounds, it’s one of those devices that messes with your mind. When I pick it up, I feel like I must be holding a hollow chassis. When I put it in my backpack, I spend the day worrying that I might have left it at home.

Sure, there are lighter laptops out there — Asus’ Expertbook B9450, LG’s Gram 13, Acer’s Swift 7, Samsung’s Galaxy Book S, and Dynabook’s Portege X30L-G all weigh a bit less — but some of these models are either significantly more expensive than the Swift 5 or a step down in performance. If you’re looking for a real-deal processor for a mainstream consumer audience, the Swift 5 is about the lightest you can go.

The model I tested, priced at $1,299.99, is a solid all-arounder without too much to criticize and not too much to gush about. Its standout feature is its weight and the performance-per-pound that it offers. Of course, for many students, remote workers, and frequent travelers, that could justifiably be a deciding factor.

The first thing you may notice when looking at this Swift 5 is its unusual color. Our unit is a dark bluish-green hue called “mist green,” a new shade for the Swift line. Acer says it’s meant to convey a “restful, balanced lifestyle”; while I’m not sure I quite see that, I do appreciate that it’s slightly different from the infinite black and gray laptops you’ll see out there.

The unique finish also includes a new “silver-ion antimicrobial agent,” which Acer says will help to kill lingering bacteria. I’m not sure how many people are catching diseases from their laptops to begin with, but I suppose it can’t hurt.

The screen bezels have shrunk from last year’s Swift 5 design, giving the display a more modern appearance. In particular, a large bottom bezel that used to hold a flashy Acer logo is gone. (That logo is now at the top of the keyboard deck.) Last year’s model had an 86.4 percent screen-to-body ratio, while this year’s clocks in at 90 percent. The screen is also brighter than its predecessor’s (321 nits as tested, to last year’s 300 nits) with great colors and contrast, though its 16:9 aspect ratio is a bit cramped.

The Swift also provides good connectivity for such a thin device (it’s just 0.59 inches thick). You get one USB 3.2 Gen 2 (supporting Thunderbolt 4, DisplayPort, and charging), two USB 3.2 Gen 1, one HDMI 2.0, one combination audio jack, and Acer’s AC port. It would be nice to have an SD slot or a second USB-C, but that’s a passing grade.

Elsewhere, the Swift 5 provides a smooth and accurate touchpad as well as a solid keyboard with comfortable keys. I hit my standard typing speeds and didn’t make a single error on my usual typing test, which has never happened to me before. For authentication, there’s a reliable and fast fingerprint reader below the arrow keys.

The only real downside of the Swift’s thin and light build is that it feels a tad flimsy. There is a bit of flex in the screen and some very noticeable flex in the keyboard. I wouldn’t say it all feels cheap — the build is clearly a step up from budget fare like the Swift 3 — but it will feel and look plasticky next to more expensive ultraportables like the Dell XPS 13.

The biggest news about this new Swift 5 is its brand-new Tiger Lake processor, the quad-core Core i7-1165G7. With this chip come a number of new features, including Thunderbolt 4, Wi-Fi 6, and Iris Xe integrated graphics.

The Swift is also certified through Evo, Intel’s verification program for Tiger Lake systems. To earn an Evo badge, a laptop has to provide a variety of benefits like one-second wake time, nine hours of battery life with real-world use, and reliable performance. Not every Evo-certified system I’ve tested has hit those marks in my testing, but the Swift 5 certainly came close.

You’re not compromising horsepower for this form factor

In addition to the processor, the $1,299.99 system includes 16GB of RAM and 1TB of storage. There’s also a $999.99 base model available, including a Core i5-1135G7 (also with Xe graphics), 8GB of RAM, and 512GB of storage. Either of these models is a fine purchase, but folks who don’t need their Swift to do anything graphically intensive should probably be just fine with the $999 configuration. Reviews have shown that the Core i5-1135G7 often matches and sometimes outperforms the Core i7-1165G7 in CPU-intensive tasks. Some other excellent laptops with similar portability benefits also fall between the $999 and the $1,299 price points, making the $1,299 model a somewhat harder sell. Asus’ 2.49-pound, 0.54-inch ZenBook 14 with equivalent specs is just $1,099.

You’re not compromising horsepower for this form factor. The Swift 5 is the fastest Tiger Lake laptop I’ve reviewed so far (apart from a very high-clocked reference design), though it’s not quite on the level of some recent AMD Ryzen products. I certainly never noticed any slowdowns or errors in my day-to-day work. And while this isn’t a laptop you’d buy for gaming, Iris Xe graphics are good enough to run some lighter fare.

The bottom of the chassis got warm during an intense day of Chrome multitasking, downloading and updating, photo editing, Zoom calls, Spotify streaming, and Netflix watching, but it was never uncomfortable to touch. I often heard the fans while the Swift was in Performance Mode, as well as a very occasional coil whine, but swapping to Silent Mode eliminated both of those. (You can easily toggle between cooling profiles with Fn+F.)

And battery life was a pleasant surprise. I averaged eight hours and five minutes of continuous multitasking (around 200 nits of brightness) on this version — a big step up from the six hours I got out of last year’s Swift 5. Battery life also improved significantly after I got rid of some programs that came loaded onto this machine, including ExpressVPN, Amazon (which is pinned to the taskbar), and Norton. It only takes a few minutes to dump all of these programs, but considering that this laptop costs over $1,000, it’s still frustrating that Acer is loading it with budget crapware.

The final thing I’ll discuss is videoconferencing software since that’s important functionality for many mobile professionals. The results here are mixed. The good news is that the Swift 5 now supports AI-enhanced background noise suppression and Wi-Fi 6. Those are difficult to test, but I did do a number of Zoom calls on the Swift 5, and nobody had trouble hearing me.

In less-good news, the 720p webcam is fairly grainy. (It’s not good enough to support Windows Hello.) The dual stereo speakers also deliver some of the weakest audio I’ve heard from a laptop — bass in music was quite thin. The Swift does come loaded with DTS Audio Processing, which allows you to swap between preset profiles for music, movies, and games, and to tweak equalizer settings yourself. There’s no profile specific to videoconferencing.

Inside its thin and light exterior, the 2021 Acer Swift 5 is a midrange laptop through and through. There are compromises but no disasters. Most aspects of it (the keyboard, the touchpad, the screen, the connectivity, the battery life) are just fine. Others (the webcam, the audio, the bloatware) are underwhelming but serviceable.

If these factors are what you care most about, you can get similar quality for less money in Acer’s Swift 3 or Aspire 5, Asus’ ZenBook 14, HP’s Envy x360 13, and plenty of more affordable machines. If you’re paying a premium for this Swift 5 configuration, you’re paying for the exceptionally lightweight build. The portable chassis — and the power Acer has packed into that portable chassis — is where the Swift 5 is at the top of its class.