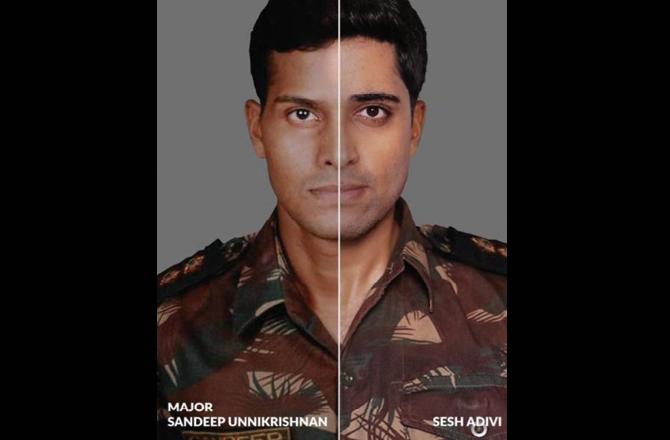 Marking the death anniversary of Sandeep Unnikrishnan on November 27, the team of Major paid a tribute with a soul-stirring video, reminiscing the journey of making the film. Actor Adivi Sesh will reprise Sandeep Unnikrishnan’s character in the upcoming film Major, directed by Sashi Kiran Tikka.

Recalling the process of shooting the film, Adivi Sesh spoke about his experience, tracing the journey from signing the film to meeting Major Sandeep Unnikrishnan’s parents.

Sharing his first memory of Sandeep Unnikrishnan, Adivi Sesh says, “I can only say that he impacted my life from the first moment I knew about him. It was in 2008, I remember when I had seen his photograph, splashed across all the channels. I didn’t know what to make of it, I kept wondering, who is this man. There was some sort of madness of spirit in his eyes and there was a smile, I couldn’t understand it. He looked like he could be one of my family members, an older cousin, and then I found out, he was Major Sandeep Unnikrishnan and he’d given his life for the country. I couldn’t stop looking at that now-iconic passport photograph.”

Revealing the story behind the photo, Adivi shares, “I later found out from his parents that he was simply trying not to smile badly when he took the passport picture, he’d given this big wide smile and woh photographer ne fauran daanta unko ki aise nahi haste, passport photo mein hasna nahi chahiye. So the lips were hiding his smile but that madness in spirit was shining through his eyes and I think that’s what captivated me, and captivated most of India. I think that picture is very iconic, that is why they make so many paintings of that photo.”

Recounting the battle of acquiring the consent of Major’s parents, Adivi shares, “When I first called uncle, Mr. Unnikrishnan, Major Sandeep’s father, he didn’t believe ki koi pichhle 10 saal se Major Sandeep ki zindagi pe research kar raha tha (someone had been researching Major Sandeep’s life for the past 10 years) and wanted to tell a story inspired by his life. I don’t think that uncle believed Hyderabad ka koi South Indian ladka jo US mein pala-badha hai, matlab waha se aakar koi film banana chah raha hai (He didn’t believe that a South Indian guy from Hyderabad, who was raised in the US, wanted to come here and make a film on him). He was very cynical, in fact.

“Since they didn’t believe me, my team and I we all kept meeting uncle and aunty, I think after the fourth or fifth time, they started to trust me a little bit and I imagined this moment after the fourth meeting, uncle looked me in the eye with lot of sincerity, ‘I believe you want to make a movie about my son’s life’.”

Opening up about an emotional experience with Sandeep Unnikrishnan’s mother, Adivi Sesh recalled, “We had already said our byes to uncle and aunty and were standing near the lift and dur se aunty ne mujhe dekha (aunty looked at me from afar) and she said ‘Idhar aao’ in heavily accented Hindi, so I went to her and she looked me in the eye and she said ‘durse bilkul mera beta lag raha hai’ (you’re looking exactly like my son from a distance). She had a tear in her eye when she said that. I think that is the moment I knew, that I had their permission to tell a story inspired by their son’s life.”

About the journey of the film, Adivi Sesh added, “Ever since then, it’s just been a crazy number of many battles of trying to get this film made and making sure we do justice to how we’re doing this film and we’re still making the film.”

Explaining the importance of the day, Adivi Sesh said, “27th ko Major Sandeep shaheed hue the and so we are releasing this video on the 27th with the intention to celebrate his life. The film speaks about the way he lived, not about the way he died.”

Concluding his appeal, Adivi Sesh said, “I hope you like my humble attempt in trying to find the spirit of Major Sandeep within myself.” Directed by Sashi Kiran Tikka, the bilingual film starring Adivi Sesh, Sobhita Dhulipala and Saiee Manjrekar will be released in both Hindi and Telugu.

Produced by Sony Pictures Films India in association with Mahesh Babu’s GMB Entertainment and A+S Movies, Major is slated to release next year.