AEW reveals the date, name, and matches for its first-ever house show 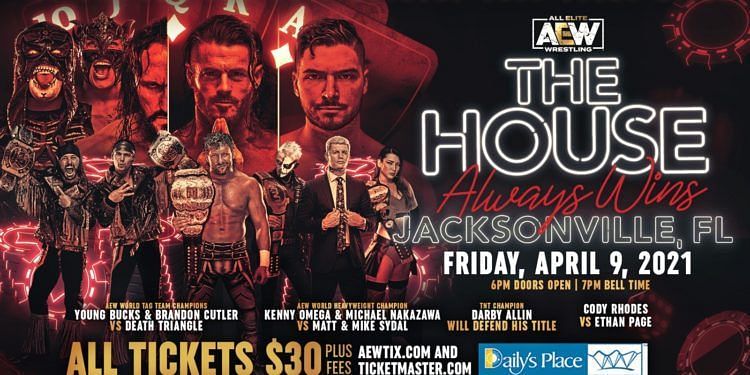 On this week’s Dynamite, AEW announced its first-ever house show will go down on Friday, April 9, a day before WrestleMania 37.

Tony Khan’s promotion took to Instagram today to reveal the name of the untelevised show. Named “The House Always Wins”, the live event will feature some of the biggest names in AEW.

The event will take place at Daily’s Place in Jacksonville, Florida, home to countless AEW shows in the past. Tickets will go on sale Monday at 10 AM ET on AEWTIX.com. Fans will also be able to purchase combo tickets for both the event and the April 7 episode of Dynamite.

If not for the pandemic that robbed professional wrestling of live fans in attendance last year, AEW could have very well conducted their first-ever house show much earlier. Non-televised shows becoming a norm in AEW would be heavily dependent on the success of the upcoming event.

These shows could provide fertile ground for AEW management to test their talent, something WWE has done rigorously in the past with its house shows.

AEW has announced a few major matches for the show that have already got fans buzzing. AEW Champion Kenny Omega will team up with Michael Nakazawa to take on Matt and Mike Sydal.

Former TNT Champion Cody Rhodes will square off against Ethan Page, who recently made his AEW debut at Revolution in a ladder match that also featured Cody.

Apart from this, Darby Allin will defend his TNT Championship at the show against an undisclosed opponent. Pinnacle, led by MJF, will be joined by Orange Cassidy, Dr. Britt Baker, DMD, and Jade Cargill in also appearing on the live show.

What do you think about the line-up of the show? Do you want any more matches to be added to the card? Sound off in the comments section below.