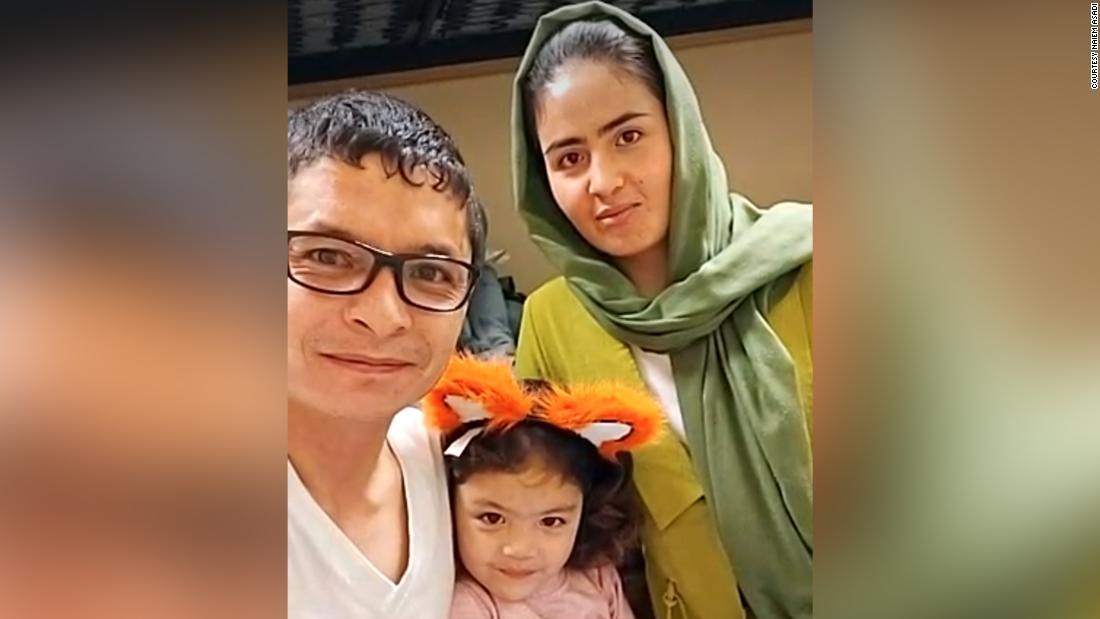 Facebook
Twitter
WhatsApp
ReddIt
Telegram
That’s because as of Monday, the US Department of Defense has ejected them from their safe hiding place on a US military base in Afghanistan, putting them at risk from the Taliban, who, Asadi says, have targeted them for killing.

Asadi is a decorated Afghan helicopter pilot credited with protecting US Air Force pilots in Afghanistan and killing more Taliban than any other pilot in the Afghan air force, according to Stars and Stripes, the US military’s independent newspaper. The Pentagon would not confirm the Stars and Stripes report on Asadi’s record.

Asadi and his family say they could now be in grave danger because of a Pentagon decision to reverse permission for them to come to the US and force them to leave the safety of the US military base in Kabul where they have been staying since October 28. There are two options awaiting him outside of US protection, Asadi told CNN in a conversation Sunday, hours before being taken off the base.

“If I am sent back to Kabul, I’m afraid I will be jailed by the Afghan government or killed by the Taliban,” Asadi said. “We are so stressed.” He and his family are now in hiding at an undisclosed location.

Asadi, 32, says the Afghan government and military he served for more than a decade will see him as a spy for the United States and that the Taliban have been looking to kill him for years because of his identity as a Taliban killer in the skies.

Asadi, Rahima and their daughter, Zainab, had been staying in a small room crammed with a bunk bed on Bagram air base, after the Department of Defense and US Citizenship and Immigration Services, part of the Department of Homeland Security, approved the Asadis’ request to take refuge in America.

RELATED:  Iran says it won’t ‘fall in trap’ of scuttling future US talks

Asadi’s attorney Kimberley Motley says Asadi has a job offer and a place to stay already arranged in the United States. She says someone seems to be playing politics with the Asadis’ lives.

“The US has an obligation under the UN convention of torture act that if there’s a substantial ground for believing that a person would be in danger of being subjected to torture, that we have an obligation as a government to not expel that person,” Motley said. “Ultimately we need to be a country of our word.”

A Pentagon spokesperson said it is aware of the situation surrounding Asadi, who is still an active-duty officer in the Afghan air force.

“There are criteria and processes to handle humanitarian parole requests by foreign nationals,” Pentagon spokesperson Army Maj. Rob Lodewick said in a statement. “After completing a full review of the request, the appropriate officials determined that DoD could not support the request. Because this remains a developing situation that involves personal matters and privacy concerns, DoD remains limited in what can be publicly disclosed.”

Asadi says he has proof that his and his family’s lives are being threatened. The threat came in the form of a letter to Asadi’s father demanding he turn his son in for killing members of the Taliban. If not, the letter said, the Taliban would seek revenge on the family.

The email was authenticated by a contractor adviser working for the US military’s Office of the Assistant Secretary of Defense for Special Operations and Low-Intensity Conflict, who wrote: “It is reasonable to infer that the applicant’s family face specific persecution from the Taliban.”

Asadi had applied to come to the US under a program known as Significant Public Benefit Parole, which offers temporary status for non-US citizens who need protection.

In an email Motley provided to CNN, the chief of the Humanitarian Affairs Branch of US Citizen and Immigration Services wrote, “USCIS confirms approval of parole on the basis of DOD evidence related to the direct threat … please issue parole document and coordinate flight processing.”

A few hours after that, Asadi says, he received a call from the Afghan government demanding that he go to an Afghan air force commander’s office to answer questions about why he was leaving the Afghan military.

“At that point I knew that he might just jail me. They look at me as a spy now because I was under the protection of the US government,” he said.

The Afghan Ministry of Defense and the Embassy of Afghanistan in Washington have not yet responded to requests for comment.

Asked about the Taliban’s threats against Asadi and his worries about the Afghan government, Lodewick said in a statement that “Major Asadi is an officer in good standing with the Afghan Air Force (AAF) and with US Forces – Afghanistan.”

Lodewick said the Defense Department “continues to work with Afghan leaders to mitigate risks to pilots within the AAF. … Taliban threats to our Afghan military partners, no matter how common, are not taken lightly by DoD or the Afghan Government. Taliban violence in Afghanistan has been unacceptably high for too long and must decrease for progress towards peace, which all Afghans deserve, to continue.”

Speaking to CNN before he was forced to leave Bagram Air Base, Asadi told CNN that he was “thankful to be on this base, no matter how small our room. We are at least safe here.”

As he spoke by video call, his wife sat beside him, holding their daughter tightly. Asadi said he knew he wouldn’t be safe “if they throw me out. My wife and child will have no one.” He can’t believe this is happening to him after years of working with the US against the Taliban and ISIS.

In August, he had received a letter of commendation for leading a formation in a risky last-minute mission to protect and save an American Air Force pilot whose aircraft was downed in Afghanistan’s heavily contested Baghlan province.

The letter, written by US Air Force Capt. Robert V. Yost, said Asadi was “one of our most trusted partners in the MD-530 helicopter community.” And that “Asadi’s actions were vital to the safe rescue and transport of the US pilot.”

RELATED:  Kate Hudson says she misses her estranged family members: 'It would be nice to connect a little bit'

Now Asadi says he fears for his life and his family’s lives because of the last-minute decision by the US Department of Defense.

Dr Dre discharged from hospital, thanks family and fans for well wishes

Can You Guess Who the Richest Member of the Kardashian-Jenner Family Is?

There’s no doubt Kim Kardashian, Kourtney Kardashian and the rest of the Kardashian-Jenner bunch...
Read more

Drama isn’t just the name of one of Jeffree Star‘s Pomeranians. In fact,...
Read more

How Elon Musk and Jeff Bezos can help save our democracy

DIY music production software like Logic Pro X is now the mainstream. Here’s what you need to know