Home General After Bars and Beaches, Gibbons Await a New Home in Thailand

After Bars and Beaches, Gibbons Await a New Home in Thailand 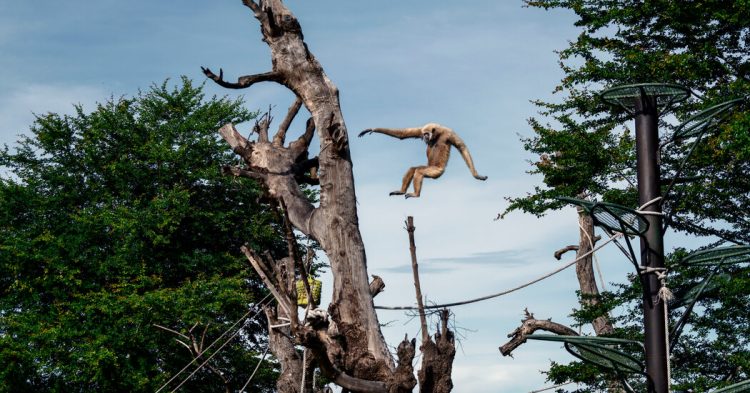 KHAO PHRA THAEO WILDLIFE SANCTUARY, Thailand — The white-handed gibbon, captured as an infant by poachers, was rescued from a grim life amusing inebriated visitors in tourist bars, then spent eight years in a cage at a rehabilitation center.

Now, this survivor of abuse and trauma lives in the jungle on Thailand’s Phuket island, where she was recently seen perched on a tree branch 50 feet above ground as her wild-born mate and their two offspring watched warily from nearby trees.

Hers is a rare success story.

Named Cop, after a police officer who aided in her rescue, she is part of a small colony of gibbons rescued, rehabilitated and released into Phuket’s largest remaining forest by the Gibbon Rehabilitation Project, a nonprofit group that rescues gibbons in Thailand.

“We now have 35 in the forest at Phuket, including those born in the wild,” said Thanaphat Payakkaporn, general secretary of the Wild Animal Rescue Foundation of Thailand, which runs the gibbon project. “Some have grandchildren now.”

But rehabilitating a rescued gibbon and training it to survive in the wild can take years, and the effort is not always successful.

Gibbons, the smallest of the apes, were once widespread across much of Asia. Rampant deforestation and ruthless hunting of the acrobatic animal has greatly reduced its numbers. In the 1990s and early 2000s, when displaying wild animals in bars was part of Thailand’s often seedy nightlife scene, young gibbons were sometimes taught to smoke, drink alcohol and eat human food.

A public outcry eventually led to new laws. Some illegal vendors switched to offering gibbons for photos at beaches or on the street. The plunge in tourism caused by the coronavirus pandemic has led some illegal owners to abandon their animals in recent months.

Since the beginning of the pandemic, Mr. Thanaphat said, he has rescued three young gibbons abandoned near forested areas north of Phuket.

At least a dozen gibbon rehabilitation centers in countries across Southeast Asia now undertake the slow process of socializing and freeing gibbons recovered from the illegal wildlife trade. Over the years, they have released about 150 gibbons into the wild, officials and the centers say.

“We would rather see an animal live four years in the jungle than 40 years in a cage,” said Edwin Wiek, founder of the Wildlife Friends Foundation Thailand, which runs the country’s largest nonprofit wildlife rescue center, with 800 animals of 70 species.

Mr. Wiek’s wildlife center in Phetchaburi Province has released nearly a dozen gibbons in northern Thailand and is seeking government approval to release 50 more in an area near the sanctuary. It has also built 14 islands in a lake where more than 20 gibbons live in natural settings without fences. Since gibbons hate to swim, they stay on their islands.

The gibbon is the only ape native to Asia besides the orangutan, and there are more than a dozen species, including the siamang, the largest. Its range extends from northeastern India to southern China and across much of Southeast Asia.

It is called the lesser ape to distinguish it from great apes like gorillas and chimpanzees, but the gibbon is remarkable in its agility.

Living high in the rainforest canopy, it can swing through the trees at speeds up to 35 miles an hour and sail across gaps as wide as 50 feet. Its powerful arms are longer than its legs and its opposable big toes help it grip branches.

Its distinctive whooping call, one of the loudest vocalizations of any land mammal, can be heard for miles. Unfortunately for gibbons, their extraordinary songs can lead poachers right to them. To capture a young gibbon, poachers will sometimes slaughter an entire family, starting by shooting the adult male and ending by killing the female as she holds her baby, Mr. Thanaphat said.

Mr. Thanaphat, 40, grew up around animals because his mother, who played a leading role in the Wild Animal Rescue Foundation, kept a menagerie at their home in Bangkok. He recalls as a child taking a blind tiger for walks and playing with two bear cubs.

He said it took many years of trial and error before the gibbon project successfully released any in the Phuket jungle, where none had lived for decades, if ever. It has also released 21 gibbons in a northern Thailand forest.

Gibbons can live up to 35 years in the wild and up to 60 in captivity. The greatest success in releasing them has come by helping them form pairs and freeing them together.

“We started the project in 1992, and it took us 10 years to successfully rehabilitate and release the first family,” said Mr. Thanaphat. “We didn’t know how to do it.”

But space is tight at the gibbon center and in the Phuket jungle itself. The center, an aging, cramped facility in the government-protected Khao Pra Theaw forest, has cages for about three dozen gibbons. The Phuket jungle is not large enough to sustain more than 40, the number it will reach in February with the planned release of five more from the center.

A wild gibbon population needs about 200 animals, experts say, if it is to survive in the long term. Some predict the Phuket colony will eventually become so inbred that it will not be viable.

“There are complaints from academics who say this is not a proper place, that we need room to release more than 200,” Mr. Thanaphat acknowledged. “But they are not here to see what we are doing.”

Returning animals to the wild has a romantic appeal and greatly improves the lives of individual animals that are freed. But some argue that, in many cases, protecting endangered species’ habitat is more cost-effective.

“Money could be much better spent protecting the wilderness rather than on rehabilitation,” said Tim Redford, the ranger training coordinator at the Freeland Foundation, a nongovernmental group that supports rangers in their fight against poaching.

Mr. Thanaphat defended his organization by pointing out that some gibbons live permanently at the center, including two that are blind and one with limbs that never correctly developed because it was kept in a small cage as a youngster.

And, not all freed gibbons appreciate being in the wild.

Some former captives never get used to being away from humans. One male, Arun, was released 15 years ago and still prefers eating the fruit he was served by humans at the rehabilitation center.

On one recent day, he left his wild-born mate and baby in the jungle and came into the center. As usual, he went to the cage of Santi, a blind gibbon, and stole Santi’s food.

Another gibbon, Bo, has been released half a dozen times. But each time, he has returned to the center and the comfort of his cage.

“We just open the door,” Mr. Thanaphat said, “and he goes back in.”