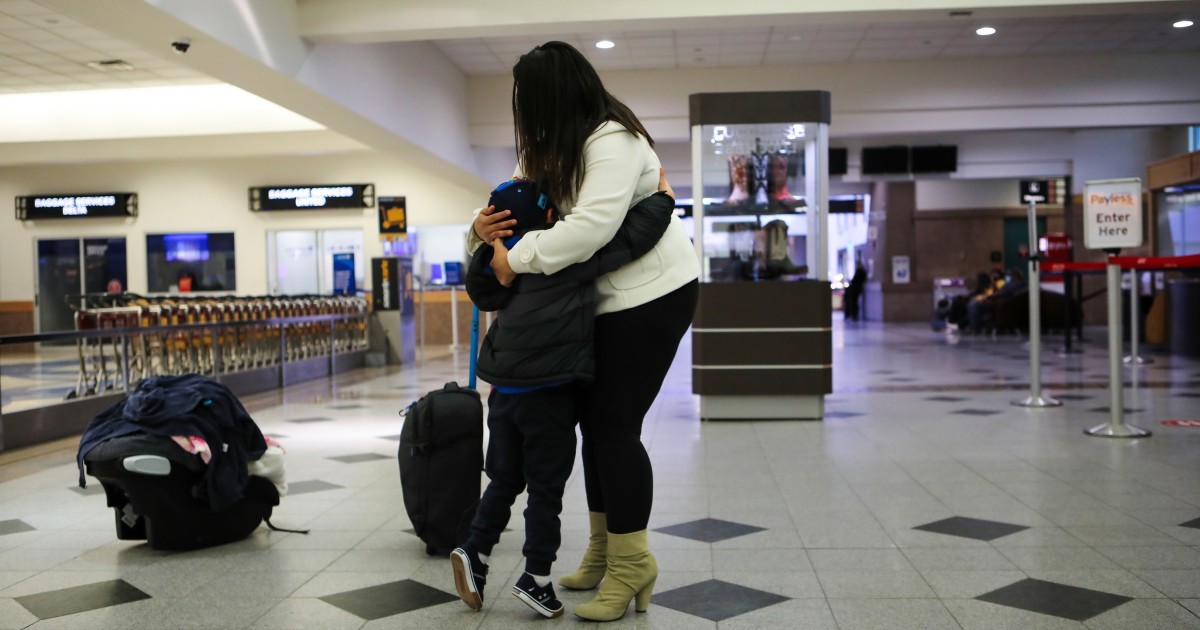 Last week, when Luz spoke to her 5-year-old son, Joshua, by phone, he didn’t sound like the same articulate, quick-witted boy who hides his emotions to avoid worrying his mother.

Instead, Joshua responded slowly to Luz’s questions. He seemed distant. He couldn’t help but divulge his feelings.

“Mom, when do you plan to take me out of this place? Why am I still here?” he asked her in Spanish. “Every day here is longer and more intense.”

At that point, having survived two hurricanes and traversing a large chunk of North America, Joshua had been held by U.S. federal authorities in a shelter in Texas and later in New York for nearly a month — separated from any family and under the care of the United States government. Luz ,who had crossed into the U.S. months earlier, anxiously waited for her son in a New Mexico apartment given to her by a U.S. sponsor.

Joshua, whose name has been changed to protect his identity, is one of thousands of children and teenagers who have arrived at the U.S. southern border without a parent or legal guardian since January. He was one of more than 11,000 minors housed by the Office of Refugee Resettlement, or ORR, an office within the Department of Health and Human Services, which Congress has charged with the care and placement of unaccompanied migrant minors.

Although analysts have called the sudden rise in numbers of unaccompanied immigrant children similar to past rapid escalations in fiscal years 2014 and 2019, the numbers are on track to break an all-time high set during the Trump presidency — a period of tight immigration restrictions. The increased arrivals of immigrant children pose a logistical, moral and political challenge to President Biden’s fledgling administration.

Housed in detention and shelter facilities away from family, these children face severe trauma and, evidence suggests, will likely suffer acute, sustained and even permanent impacts to their minds and bodies.

The administration is struggling to safely shelter and care for the minors before releasing them to parents, other family members or vetted sponsors in the United States — a task that has been complicated by social distancing and shelter-capacity rules due to the COVID-19 pandemic.

This month, the Biden administration directed the Federal Emergency Management Agency to support border officials in managing the arrivals of minors at the border. In addition, officials are scrambling to open several temporary influx facilities, mostly in Texas. Children are scheduled to be housed at the San Diego Convention Center by this weekend.

On Wednesday, Biden asked Vice President Kamala Harris to lead the administration’s efforts to handle the increase in migrants on the U.S.-Mexico border, charging her with leading diplomatic relations to foster greater cooperation with the Central American countries of El Salvador, Guatemala and Honduras, where many migrant children begin their trek north.

Joshua’s journey began with his mother, Luz, in a working-class neighborhood in San Pedro Sula, Honduras’ second-biggest city, which has one of the world’s highest murder rates. Luz asked that her and Joshua’s full identity not be made public because of gang threats against her life.

When Luz at 15 came out as a lesbian, gang members began to harass her at school. They raped her on several occasions and she consequently became pregnant with Joshua. For years, she moved around to different neighborhoods within the city to escape the gang members. But they always seemed to find her.

The last time they found her was last summer. The gang members raped her again, she said, and told her she’d “end up at the bottom of a ditch with only flies for company” if she didn’t agree to become a “mule” and transport drugs for them. She said the rape resulted in another pregnancy.

Desperate, she told her family she had to leave the country. Her mother, father and brother agreed but begged her to leave Joshua with them.

“It was the hardest decision,” she said. “But I didn’t want him to become yet another orphan because his mother stayed and was killed by the gang.”

She left in the fall and worked her way north to Mexico, making enough money to fund her journey. She thought she might stay, but she couldn’t make enough to settle down. She also found Mexico to be as dangerous as Honduras, especially for immigrants, recognizable because of their accents, making them easy prey for the cartels and gangs.

On her hazardous journey, she learned about a woman in New Mexico named Jan Thompson who sponsors asylum seekers and helps them settle into a new life in the U.S.

In November, Luz gave herself up to border officials in the Mexican city of Reynosa and asked for asylum. She gave them Thompson’s name and number, telling them that she would sponsor her. Officials confirmed the information and let Luz go while she fought her asylum case in court. Thompson pays for a studio apartment in Las Cruces for Luz and her infant daughter, Joshua’s half-sister.

“I missed Joshua but knew he was in good hands with my brother and parents,” she said. “But then came the hurricanes.”

In November, the adobe home where Joshua lived with relatives was left in tatters after two Category 4 hurricanes struck the region. An uncle, the family’s main provider, had lost his job as a result of the pandemic.

Days after the house fell, Joshua’s uncle called Luz in New Mexico, telling her he planned to journey to the U.S. so he could make money to help rebuild the family home.

“I plan to take the boy with me. He misses you,” her brother told her.

Luz, 22, worried about the treacherous journey and the bleak conditions for children she’d witnessed at the border. But she was eager to see and hug her son again.

Her brother was a father to Joshua — helping her take care of him since birth.

“He’ll protect him,” she thought to herself.

On Feb. 18, Joshua and his uncle crossed the border near Reynosa, Mexico, across from McAllen, Texas. They gave themselves up to border officials, who separated them.

Under U.S. immigration policies, children traveling with anyone other than a parent or legal guardian are immediately separated from the adult they are traveling with. The child is then categorized as an unaccompanied minor and becomes a ward of the federal government.

Immigration officials expelled the uncle to Honduras. On Feb. 21, Joshua arrived at the Sunny Glen Children’s Home New Day Resiliency Center in Raymondville, Texas. When Luz got the news, her heart sank. She’d given birth to her daughter days earlier. Now she had to retrieve her son.

From the start, Luz said she had complied with everything the caseworker at the Texas shelter asked of her. She sent him her identification information and the boy’s birth certificate. When the shelter asked for her fingerprints and those of her sponsor, they both submitted them, even though it is not mandatory under ORR guidelines.

A few weeks later, Joshua was transferred to Cayuga Centers in New York City. Luz said the caseworker told her they moved the boy to New York to make room for more children at the Texas shelter. When he arrived, the new caseworker called Luz asking for her son’s birth certificate, her identification and other information she already had given to the caseworker in Texas.

“He doesn’t cry when we speak by phone,” Luz said this month. “But I can tell he’s been crying. His cheeks and his little nose are flushed red.”

A spokesperson with the federal Administration for Children and Families would not comment on Joshua’s case because of the agency’s policy on privacy and security of unaccompanied children.

Some Republicans have pounced on the growing numbers of young migrants, asserting without evidence that many are victims of human trafficking.

No government statistic tracks children smuggled across the border by “coyotes” or bad actors versus family members.

In 2015, ORR placed additional requirements on parents or other sponsors after a report revealed that federal officials had released immigrant teenagers to traffickers who made them work in an Ohio egg farm under slave-like conditions.

Joshua’s case is unusual in that he is part of a relatively small cohort of younger children in ORR custody. In fiscal year 2020, children under the age of 12 made up about 16% of unaccompanied minors, according to government data. Most were teenagers.

But Joshua‘s 32-day stay at the shelter appears to be the norm. Officials say children are staying an average of 37 days at Health and Human Services-sponsored facilities. The highest average was between 60 and 90 days during the Trump presidency.

Twice, shelter officials in New York pledged to return her child to Luz, only to hours later renege on their promise. At that point, Dr. Amy Cohen, a child psychiatrist and executive director of Every Last One — a Los Angeles-based nonprofit that works to reunite separated migrant families — enlisted an immigration attorney to write a letter to ORR. Shelter officials committed to placing Joshua on a plane bound for El Paso International Airport the next day.

“The nightmare is over,” Luz told him.