Ahead of key meeting, Congress downplays dissent in ranks 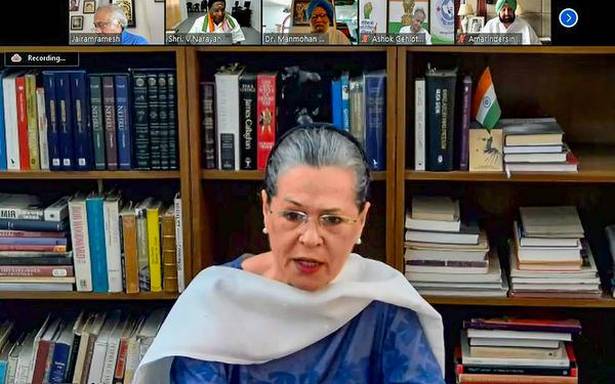 Ahead of a crucial meeting of Congress president Sonia Gandhi with senior leaders, including some from the group of 23 (‘G-23’) dissenters, the Congress on Friday downplayed internal dissent by asserting that “all issues stood resolved” with the announcement of the election for the next party president.

However, several G-23 members were upset that the Congress officially downplayed the importance of Saturday’s meeting, with many asking what was the need for a meeting if “all issues were resolved”.

Sources told The Hindu that Mr Surjewala’s press conference prompted a late night meeting of some of the dissenters.

“All the issues stood resolved with the announcement of the next election of the Congress president. So there are no internal issues of dissensions that are pending in the party of any nature,” he added.

Though there has been no official confirmation from the party on the attendees of the Saturday meet, sources said Leader of the Opposition in the Rajya Sabha Ghulam Nabi Azad, Deputy Leader Anand Sharma, former chief ministers Bhupinder Hooda and Prithviraj Chavan, and former Union ministers Shashi Tharoor and Manish Tewari are among the G-23 leaders who have been invited.

Calling Saturday’s the first among a series of meetings planned over the next fortnight by the Congress president, Mr. Surjewala said Ms. Gandhi had started the process of consultations with senior leaders over a range of issues such as the winter session of Parliament being skipped, the farmers’ agitation and the forging of alliances in key States.

Internal elections, an organisational revamp, and “full time and active leadership” were some of the crucial issues that the G-23 had raised in a letter to Ms. Gandhi in August.

Talking about leadership, Mr. Surjewala said, “Congress workers and the electoral college, including the AICC (All India Congress Committee) members of the party will choose a person best suited for the post. It is my belief and the belief of the overwhelming majority of 99.9% leaders and workers that Rahul Gandhi is the right person to lead the party and to take on the Modi government.”

The Congress spokesperson said Mr. Gandhi was a leader who had fearlessly questioned the anti-people policies of the Modi government and had endeared himself not only to Congress workers but also to ordinary Indians.

“We feel Rahul Gandhi should lead the party from the front,” he added.