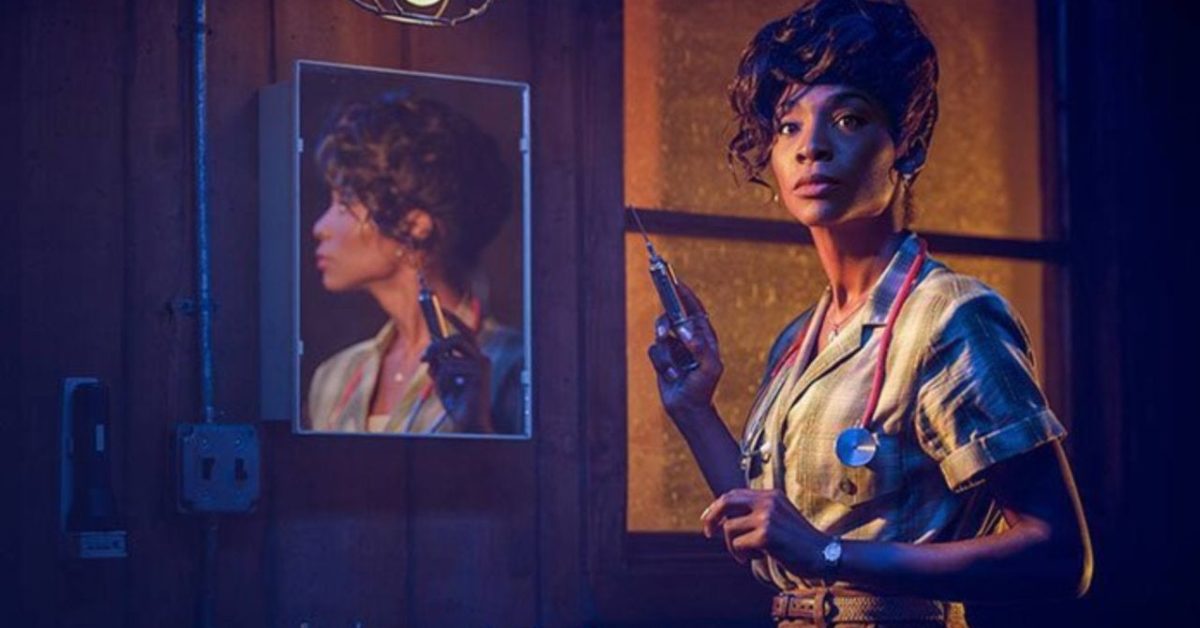 We’re not going to lie. It feels pretty cool having production news on Ryan Murphy and Brad Falchuk‘s American Horror Story to report on- especially during the time of the year when the series is usually on hiatus. But between COVID-related production delays and an upcoming spinoff series (American Horror Stories), the new year has started off as a busy one in the AHS universe. Recently, we learned that “Pilgrim” (Hmmm…) was approved earlier this month to film the tenth season in and around Provincetown, and then Dylan McDermott (Murder House, Asylum, Apocalypse, 1984) hinted that he’s going to be a part of the FX on Hulu spinoff series. Following that, we took a look at Angelica Ross giving us the heads-up that it won’t take long this season before the red flows and at Billie Lourd possibly already working on the new season (and that was all just this month). Now, Ross returns with possibly one of the best endorsements that you can give the long-running horror anthology series.

Taking to Twitter on Thursday, Ross wants viewers to know that the upcoming season’s so scary that she might not be able to actually watch it when it’s done. Promising that fans “are going to LOVE it” and that “it’s creepy AF,” Ross also mentioned that it’s been “easier to film.” Hmmm… check out the tweet below while we throw another log on our dumpster fires of speculation:

This season of AHS is going to be too scary for me to watch. It’s easier to film but YIKES I know a lot of y’all are going to LOVE it, but it’s creepy AF! pic.twitter.com/96cfd9pNI0

A Look at What We Know About AHS Season 10

Let’s look back at a chunk of what we know so far- starting with Murphy posting an image of sand dunes on a beach with the caption, “American Horror Story. Clue.” Considering the imagery and the location of Provincetown, Massachusetts, being utilized for filming on the upcoming season, we’re going with the story being based around (or including) the “Lady in the Dunes”: the name was given to the body of an unidentified woman discovered in July 1974. Though efforts were made in 1980, 2000, and 2013, to learn the victim’s true identity (as well as the identity of her killer) remains unknown.

Then in late August, Murphy posted an image of a set of sharpened teeth with the news that production on the tenth season would begin in October. Could the set of sharpened jaws be teasing a water-based menace? Possibly killer mermaids? And what about Sarah Paulson‘s tease (joke?) about aliens being a factor? Then we were gifted new key art (along with key art for spinoff anthology American Horror Stories) that looks to keep the theory alive (with Paulson teasing more details in a podcast that she and Murphy did should be dropping sometime soon). Recently, cast member Finn Wittrock revealed that “this season is structured in a way no other season has been” and that “it has something to do with sharp teeth.” Ross took to Twitter in January 2021 to let AHS fans know that the upcoming season was “going to get very bloody very quick.”