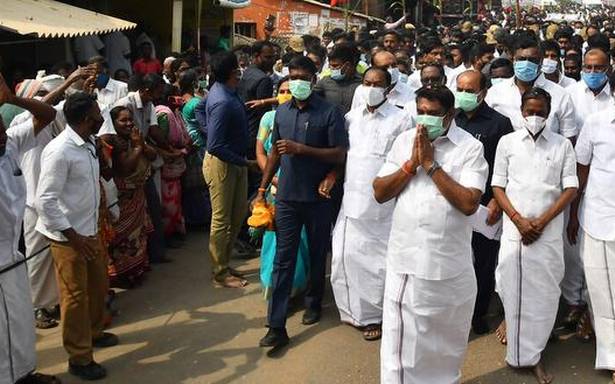 Placing before the electorate the achievements of his government, AIADMK co-coordinator and Chief Minister Edappadi K. Palaniswami on Saturday declared that the party would retain power with the “highest majority” in 2021.

Launching an early campaign, after offering prayers at Sendrayan Perumal temple in Periyasorgai, in his Edappadi constituency, Mr. Palaniswami said that even if all DMK leaders campaigned in Edappadi, the party would still not be able to defeat the AIADMK in the Assembly election. He was referring to the recent meetings in Salem, addressed by DMK women’s wing leader Kanimozhi.

“The AIADMK has been [cumulatively] in power for 31 years, the longest period. Dreams of our leaders M.G. Ramachandran and Jayalalithaa are being fulfilled by this government. The Opposition had said that this [Palaniswami] government will not last long, but our government is into its fourth year,” he said.

He highlighted the handling of the pandemic, the cyclones and the drought; the attracting of numerous investment proposals; creation of the 7.5% horizontal quota for government school students in medical admissions, and the launching of the Kudimaramathu scheme among the major achievements of his government.

The government, in its first year, battled severe drought and ensured water supply, he said. Besides, swift decisions were taken during successive cyclones, and Ministers were sent to the affected districts to monitor relief measures, and compensation was offered.

Acting on the guidance of the State-appointed expert committee, WHO and the Union Health Ministry and taking effective measures had led to a reduction in the number of people testing positive for COVID-19, he said. The efforts had drawn appreciation from the Prime Minister. He said the government created history, procuring 32 tonnes of paddy in the delta region.

“The Opposition leader [M.K. Stalin] is criticising us, asking about the schemes implemented by the government, and if anyone has benefited from it. But today, the State is amassing awards from the Central government, in all departments,” Mr. Palaniswami said.

The State received an award for water management, he said, asking what the erstwhile DMK government had done on this front. Tamil Nadu was also a power-surplus State, unlike during previous DMK tenure, when people were uncertain when power supply would be cut.

He said the Global Investors’ Meet in 2019 had led to 304 companies signing MoUs, committing to invest ₹3 lakh crore. During the pandemic, only Tamil Nadu attracted investment proposals for ₹60,000 crore.

Through the Chief Minister’s special grievance redressal scheme, government officials met the people and addressed their grievances, he added.

The Chief Minister, a four-time MLA from Edappadi, pointed out that the DMK had never won in the constituency in 43 years. He said wherever he went, people referred to him as ‘Edappadiyar’, and that fame belonged to the people. He said he had never dreamed of becoming the Chief Minister, but was catapulted to the position by “God’s grace”.

In the region, the Mettur surplus water scheme had been implemented, he said, appealing to the electorate to vote for the “two leaves” symbol next summer.