Airport Diaries: Nidhhi Agerwal sports sweatshirt & denim shorts with a Chanel bag that worth a bomb 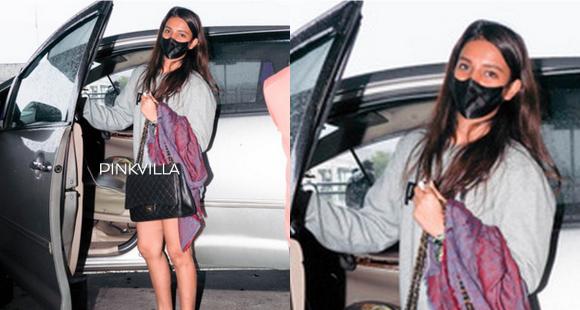 However, Nidhhi kept it simple and completed her airport look with a pair of slippers. Airport Diaries: Nidhhi Agerwal sports sweatshirt & denim shorts with a Chanel bag that worth a bomb

South and Bollywood actress Nidhhi Agerwal was recently spotted at Hyderabad airport for the promotions of her upcoming film, Eeswaran. The actress sported casual yet comfy airport look in sweatshirt and denim shorts paired with her black Chanel jumbo flap sling bag that is worth more than Rs 2 Lakh. The stunner carried her basic off duty look with a bag costing a whopping amount. However, Nidhhi kept it simple and completed her airport look with a pair of slippers.

Nidhhi is known for her impeccable style, on as well as off-screen. She looks good in anything and everything she wears. She has managed to charm her fans with beautiful photos on social media. The actress is super active on Instagram and keeps treating us with some stunning photos. Meanwhile, she has been travelling a lot for the promotions of Eeswaran, co-starring Simbu. The actress was recently in Chennai and has moved to Hyderabad for another promotional tour.

Check out her airport look below: Directed by Suseenthiran, Eeswaran is touted to be a rural drama. It also stars Nandita Swetha, Bharathiraja in a key role.  The film is set to hit big screens on January 14.