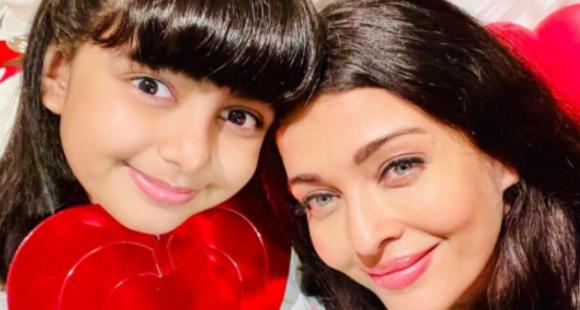 The Valentine’s week is finally over but love is still in the air! Social media is abuzz with pictures and videos from the celebration of the day of love. While a few of them chose to celebrate Valentine’s Day with their special someone, a few others decided to do the same with their family members. Among them is Aishwarya Rai Bachchan who engaged in mini festivities with her daughter Aaradhya as Abhishek Bachchan was away from home for work.

The actress has shared an adorable post in which she pens a sweet note for Aaradhya that reads, “LOVE YOU ETERNALLY, INFINITELY, and UNCONDITIONALLY MY DARLING ANGEL AARADHYA.” Apart from that, she has shared two lovely pictures and one of them happens to be of a beautiful heart-shaped chocolate cake. The mother-daughter duo happily poses for the first picture in which Aishwarya is donning a red outfit. Aaradhya, on the other hand, wears a white floral dress with a heart-shaped plate in her hands.

Well, we are surely missing Abhishek Bachchan in the frame here. The actor is currently busy with his upcoming comments one of which is Bob Biswas, a sequel to the Vidya Balan starrer Kahaani. It will be produced by Shah Rukh Khan. He will also be seen in The Big Bull which chronicles the life of Harshad Mehta. As for Aishwarya, the actress will next be seen in Mani Ratnam’s Ponniyin Selvan co-starring Chiyaan Vikram, Karthi, Aishwarya Lekshmi, and others.