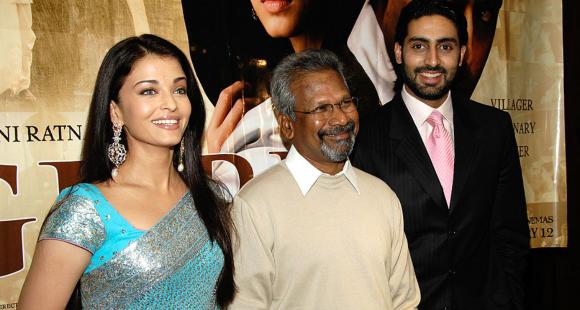 Aishwarya Rai Bachchan may be a tad late but the actress did not forget to mark the special day on social media. For those who are unaware about what special day we”re referring to, here’s the scoop. On 12 January, Aishwarya and husband Abhishek Bachchan’s hit film Guru clocked 14 years. Directed by Mani Ratnam, the film was remembered by fans who tweeted about the same on social media.

In celebration of the film’s 14th anniversary, Aishwarya took to Instagram to share some special red carpet moments with Abhishek and Mani Ratnam late on Tuesday night. Sharing a collage of photos  from the film’s New York screening, Aishwarya captioned it, “On this day..14 years…GURU FOREVER..”

In the red carpet photos, Abhishek and Aishwarya can be seen talking to the press. While Abhishek looked dapper in a suit, Aishwarya had worn a blue bling saree for the New York screening. The actress also shared a solo photo of Mani Ratnam all smiles.

Meanwhile, on Twitter, a fan reminded Amitabh Bachchan of Guru turning 14 with a beautifully edited video of epic scenes from the film. Reacting to the same, Amitabh was all praise for the film, as he retweeted the video and wrote, “yes indeed .. a fantastic film and Abhishek was marvellous.”

Check it out below:

yes indeed .. a fantastic film and Abhishek was marvellous https://t.co/78Jq4cLhL5

Guru released back in 2007 and was a massive hit at the domestic box office. The film released just a few months before the actors tied the knot.