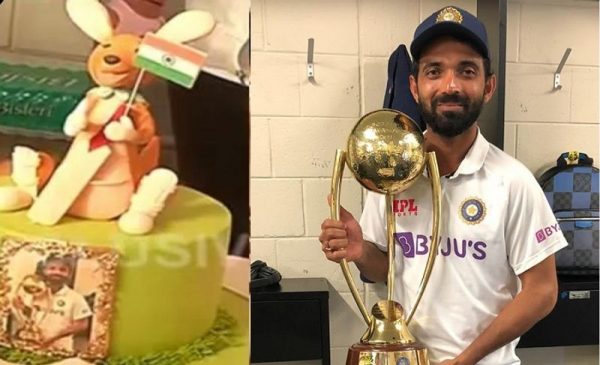 Team India’s Test veteran Ajinkya Rahane is one of the most respected figures of Indian cricket. His conduct both on and off the field has earned him plaudits from all corners. His decision to not cut a Kangaroo cake upon returning him from winning the series Down Under earned him even more respect from his fans and peers.

Rahane took over the leadership duties from departing Virat Kohli after the Adelaide drubbing where India were all out for 36 runs – their lowest total ever. From there, he guided a young side to a historic 2-1 series win in the Border-Gavaskar Trophy beating Australia in Melbourne and Gabba, where they lost for the first time in 32 years.

The Indian cricketers received heroic welcomes as they arrived from Australia after making history Down Under. Friends and families of the players welcomed the players in a grand manner. As Ajinkya Rahane returned home, a special cake was prepared for him but out of respect for the Australians, the veteran batsman refused to cut the cake.

In a candid chat with renowned broadcaster Harsha Bhogle, Rahane revealed that he doesn’t want to disrespect any country irrespective of the outcome of the series.

“Kangaroo is their national animal. I don’t want to do that. You give your opposition respect, you treat them well even if you win or even if you create history. You have to have respect for your opponent and other countries. That is why I took the decision against cutting the cake with a kangaroo on it,” Ajinkya Rahane told Bhogle.

Always wanted to ask @ajinkyarahane88 about the cake he was offered with a kangaroo on it and why he refused to cut it. The small things that tell you more about a person. More of this conversation on his FB page. pic.twitter.com/YZwwQKlFJq

Harsha Bhogle also asked Ajinkya Rahane if he is feeling tired after the Australia tour. The response of India’s Test vice-captain was, “Yes, but in a good way“.

Meanwhile, with the return of Virat Kohli, Rahane will once again slot back to his original role of playing solely as a batsman. Speaking about the transition, the cricketer from Mumbai stated that he always maintained Virat is his captain and he is Kohli’s deputy and he wants things to play from behind in the England series.

The four-match England series commences from February 5 at the MA Chidambaram Stadium in Chennai.