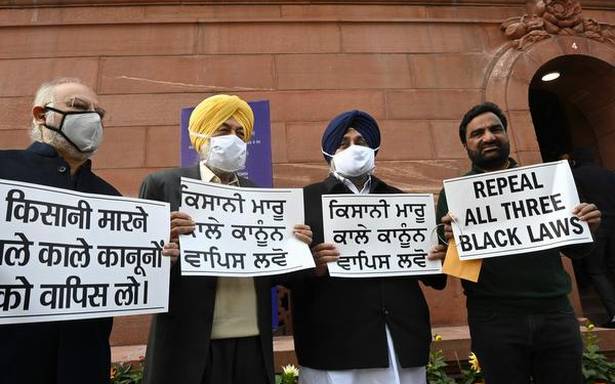 Former National Democratic Alliance (NDA) partner Shiromani Akali Dal (SAD) pledged support to the protesting farmers and decried what they termed were attempts by the government to “play games” with the farmers’ unions that led, according to them, to the violence on Republic Day.

SAD leader Sukhbir Singh Badal said he had a telephone conversation with Bharatiya Kisan Union (BKU) leader Rakesh Tikait and told him that the party would support his group’s efforts in full. “I spoke to Rakesh Tikaitji and assured him of Akali Dal’s unstinted support to the kisan andolan [farmers’ protest]. I lauded his principled stand against Central oppression. We also reminisced about how our fathers fought as one for the cause of the farmers and resolved to do the utmost to ensure their victory,” Mr. Badal said. The SAD had walked out of the ruling NDA during the monsoon session of Parliament last year when the three contentious farm laws were cleared by both Houses.

Former Union Minister Harsimrat Badal said it was regrettable that “there was not a single word in the President’s address to both Houses of Parliament about the 100 or more farmers who have died protesting against the three laws”.

“The government is trying to crush the protests. Their ‘tandav’ [dance of fury] over the emotions of the farmers is very open. A game was played very skilfully on January 26 on innocent farmers who did not know the roads of Delhi. We condemn violence, but let us not be blind to fact that the government has stooped to low means to deflect from the real issues just because they don’t want to deal with it,” she said.

The party had joined 18 other political parties in boycotting President Ram Nath Kovind’s joint address to both Houses of Parliament, and MPs from the party stood in protest outside the House throughout the speech.

Back to Top
Close Add post
X
Jharkhand HC defers Lalu’s bail plea to Feb 5…IndiaThe court gave time to the Central Bureau of Investigation to file its reply on the bail petition of the former Bihar Chief Minister, who was jailed a…

X
IIFT 2021: NTA releases Indian Institute of Foreign Trade entrance exam answer k…IndiaIf candidates want to challenge the answer key in case of any discrepancies, they can do so on the official website till 30 January Representational i…
close