Akshay Kumar poses for a perfect selfie with Shikhar Dhawan; Latter says ‘Always a fun time with you paaji’ 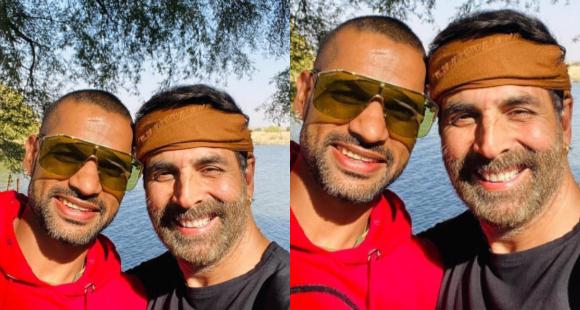 Akshay Kumar, who was shooting in Jaisalmer for Bachchan Pandey, apparently met up with Indian Cricketer, Shikhar Dhawan and the result was a stunning selfie. Shikhar shared it on social media and gave fans a glimpse of their bond.

Akshay Kumar poses for a perfect selfie with Shikhar Dhawan; Latter says ‘Always a fun time with you paaji’

In a surprising coincidence, Akshay Kumar and Indian Cricketer Shikhar Dhawan apparently may have bumped into each other in Jaisalmer, Rajasthan where the former has been shooting for his film, Bachchan Pandey. The film has been the talk of the town since last month when the actor and co-star, Kriti Sanon kicked off the shooting in Rajasthan. Now, amid shooting, Shikhar Dhawan apparently met with Akshay and clicked a perfect selfie with him. Not just this, he showed all the camaraderie they share as he dropped the photo on his social media handle.

Taking to his Instagram handle, Shikhar shared the selfie with Akshay on social media. In the photo, the Indian Cricketer is seen clad in a red hoodie with a cool pair of sunglasses. On the other hand, Akshay is seen clad in a grey tee with a cloth around his forehead. He is seen in his character look from Bachchan Pandey. As the two stars posed for a perfect selfie, the photo gave us a glimpse of the shoot location near a lake and sand dunes in the backdrop.

Sharing the photo, Shikhar expressed how it was great meeting Akshay. He wrote, “Always a fun time with you paaji  Lovely meeting you @akshaykumar.” Seeing the photo, fans could not help but drop compliments for the two stars.

Meanwhile, Akshay is currently shooting with Kriti Sanon, Arshad Warsi, Prateik Babbar and others in Jaisalmer for Bachchan Pandey. On January 26th, the team of Bachchan Pandey celebrated Republic Day with the Army, and photos surfaced on social media. The film is helmed by Farhad Samji and produced by Sajid Nadiadwala. It will release on January 26, 2022.