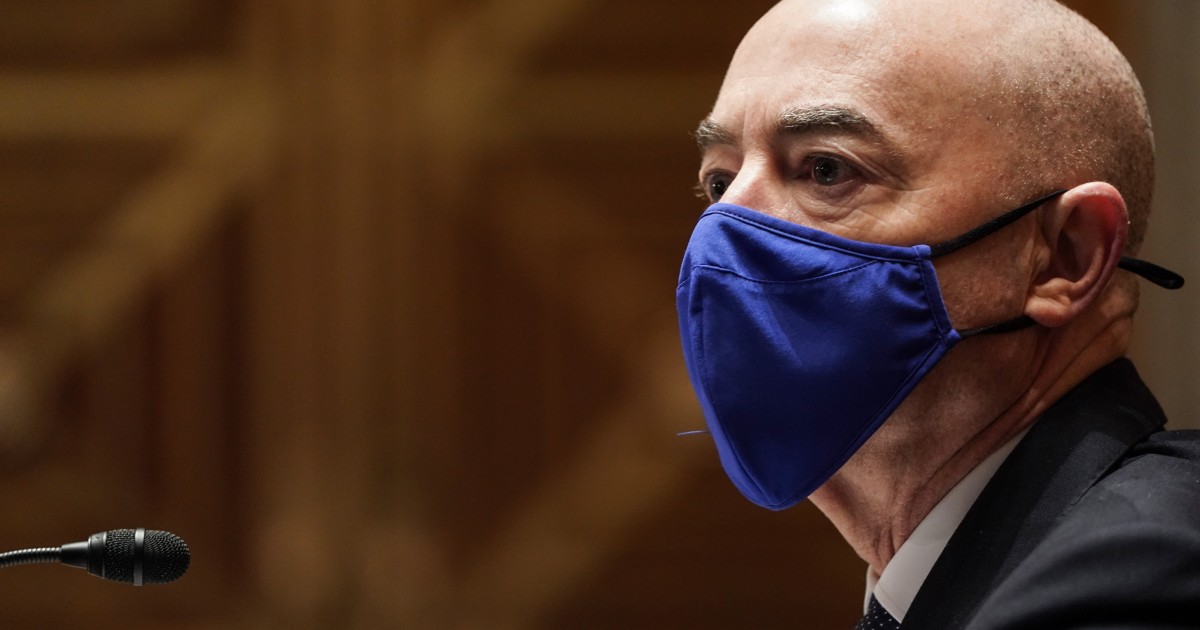 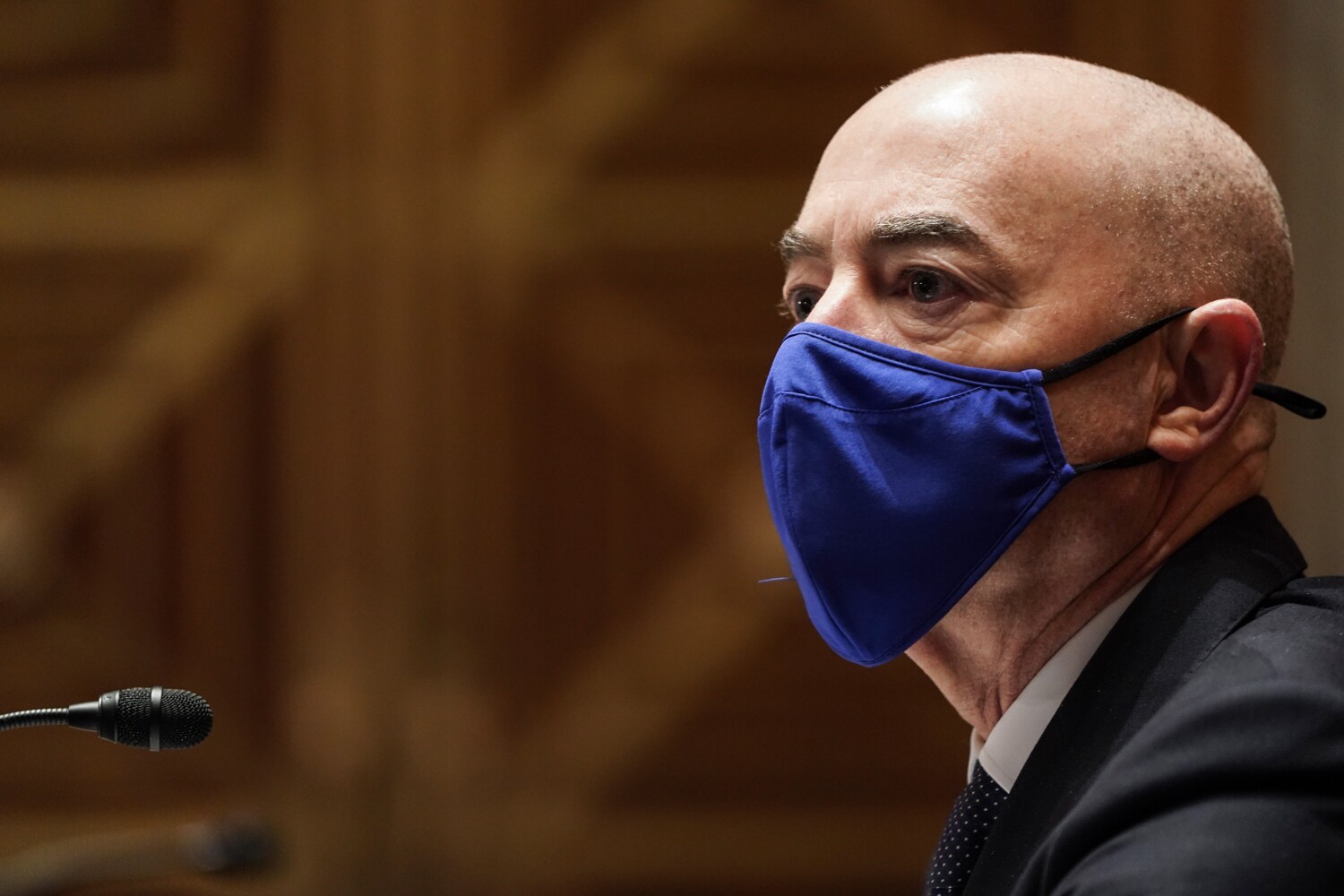 Alejandro Mayorkas was confirmed as President Biden’s secretary of Homeland Security on Tuesday, filling a key Cabinet post as Washington grapples with the fallout of the Jan. 6 attack on the Capitol and gears up for yet another political fight over immigration policy.

Mayorkas, whose confirmation was delayed by Senate Republicans — in a break from the precedent of two prior Republican and Democratic administrations — ultimately won confirmation with a 56-43 vote mostly along party lines, with only six Republicans voting in favor.

Born in Cuba and raised in Los Angeles, Mayorkas is the first Latino and first immigrant to serve as Homeland Security secretary — marking a dramatic shift in tone and policy at the government’s third-largest department from the Trump administration.

“Like most of President Biden’s Cabinet nominees, his nomination is also history-making,” Senate Majority Leader Chuck Schumer (D-N.Y.) said of Mayorkas on Tuesday morning on the Senate floor.

The Homeland Security department saw record turnover and unprecedented politicization under former President Trump, who campaigned on nativist rhetoric and wielded the department as a bludgeon to achieve the administration’s goals of restricting immigration and effectively closing the border.

In the wake of the attack on the Capitol, former Homeland Security secretaries and Trump officials, along with Democrats, had urged the quick confirmation of Mayorkas to lead the government’s department charged with domestic security, saying Republicans were holding his nomination “hostage” for political reasons.

“I question what purpose the delay served, especially when we’re at a heightened risk posture,” said Janet Napolitano, who served as Homeland Security secretary under President Obama. “Ali is the same qualified individual as he was on 1/20,” Biden’s Inauguration Day.

The Senate confirmed both Napolitano, Obama’s pick, and retired Gen. John Kelly, President Trump’s pick, on their first day in the White House.

Republicans stepped up their opposition campaign against Mayorkas, including filibustering his confirmation, after Biden on his first day set an unexpectedly aggressive agenda on immigration and border security.

Senate Minority Leader Mitch McConnell (R-Ky.) urged Republican senators to vote against Mayorkas ahead of his confirmation Tuesday. The contrast with Kelly’s confirmation process, he argued, reflected differences in the nominees’ qualifications for the Cabinet post.

“Up to this point, I’ve voted in favor of the president’s mainstream nominees to key posts,” McConnell said in a speech on the Senate floor. “Mr. Mayorkas is all too familiar with the levers of power that control U.S. immigration law. The problem is when he’s chosen to pull those levers — and for whose benefit.”

Mayorkas had already been confirmed by the Senate three times for prior positions, including deputy Homeland Security secretary under the Obama administration, as well as U.S. attorney for the Central District of California.

A 2015 Homeland Security Inspector General report into allegations that Mayorkas “exerted improper influence” in assisting companies with obtaining employment visas when he served as Obama’s director of USCIS, the agency charged with administering the legal immigration system, found that he intervened in three cases “in ways that benefited the stakeholders” and led employees to “reasonably believe” that certain individuals were given “special access.” The report did not find that Mayorkas broke the law, and he has disputed the finding.

On inauguration day, Biden delivered to Congress a sweeping comprehensive immigration reform bill that would offer 11 million undocumented immigrations in the U.S. a 8-year pathway to citizenship, and issued executive orders to rescind both Trump’s travel ban on several majority-Muslim and African countries as well as an emergency declaration Trump used to fund border wall construction.

But the Biden administration so far has also left in place a spate of other Trump policies, in particular choking off access to asylum. Incoming Biden officials caution that rebuilding the Homeland Security department and untangling hundreds of executive actions on immigration by Trump officials while following administrative procedure law that predecessors often ignored would take time.

“That cannot be accomplished with just the flick of a switch,” Mayorkas said in his Jan. 19 confirmation hearing before the Homeland Security and Governmental Affairs Committee.

Last week, the White House pushed back a planned signing of a wide range of executive orders on immigration, including the founding of an inter-agency task force to reunite hundreds of families still split after being subjected to the Trump administration’s much-criticized family separation policy, as well as ordering the review of policies that forced tens of thousands of asylum seekers forced back to Mexico.

Biden signed those orders Tuesday evening after Mayorkas’s Senate confirmation, and he was formally sworn in by Vice President Kamala Harris following the signing ceremony.

Last Tuesday, a federal judge in Texas temporarily blocked Biden’s announced 100-day moratorium on most deportations, another sign that the new president’s immigration policies will face conservative challenges in court as well as in Congress.

In recent days, Immigrations and Customs Enforcement has deported hundreds to Central America and the Caribbean, and has scheduled removal flights to Africa as well.

Republican lawmakers and pundits have responded to Biden’s first steps with familiar cries of “amnesty” and “open borders,” claiming that the president’s pledges to offer undocumented immigrants legal status — so far, applying only to those already in the United States — are solely responsible for pulling thousands of migrants northward.

The Trump era, too, saw so-called caravans and surges in immigration, despite implementing among the strictest immigration enforcement policies in decades.

Republican senators drew out Mayorkas’s confirmation process, including trying to force him to come before the Senate Judiciary Committee.

After Mayorkas’s confirmation hearing before the Homeland Security and Governmental Affairs Committee, Sen. Josh Hawley, (R-Mo.) — who sits on both committees, and is the subject of an ethics complaint aabout his potential role in the Jan. 6 riot — said he was putting a hold on the process “when so many questions remain unanswered.”

Sen. Chuck Grassley (R-Iowa), who sparred with Mayorkas as a former Judiciary Committee chairman, said before Monday’s votes that Biden’s other nominees would “find quick approval,” but singled out his Homeland Security pick as “the only one I know that’s got some questions about [him].”

“DHS has been without a permanent leader for almost two years,” he said.

Trump went through half a dozen picks to lead the Homeland Security department, only two of whom were nominated and confirmed by the Senate as secretary.