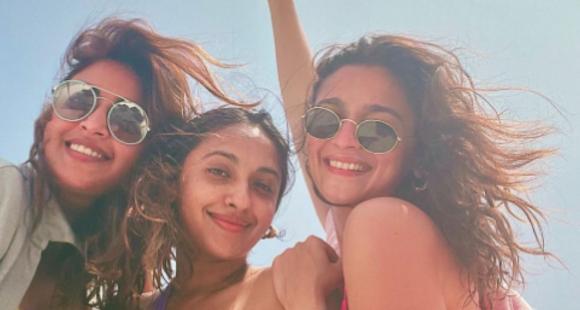 Alia Bhatt earlier headed to Delhi to spend some quality time with beau Ranbir Kapoor. She then jetted off to Maldives for a mini vacation.

It seems like Maldives has become the most favourite destination of many Bollywood celebs. Earlier, we saw many of them jetting off to the exotic locale ahead of the New Year celebrations. The latest to join the bandwagon is none other than Alia Bhatt herself. A few days ago, she had gone to Delhi to spend time with her beau Ranbir Kapoor who had been shooting there for Luv Ranjan’s upcoming movie with Shraddha Kapoor. Alia then returned to Mumbai.

Post that, the actress set off to Maldives with her sister Shaheen Bhatt, Akansha Ranjan Kapoor, and Anushka Ranjan. They have been sharing multiple pictures on social media already! For instance, Akansha has shared a few pictures in which the three of them look stunning in swimwear. Alia Bhatt looks stunning in a pink bikini while Akansha, on the other hand, wears a purple one. Anushka Ranjan looks ravishing as she opts for a neon monokini. While Alia Bhatt continues her vacation, she has a couple of projects lined up most of which are ready for release. Among them is Brahmastra co-starring Ranbir Kapoor, Amitabh Bachchan, and Nagarjuna Akkineni which has been directed by Ayan Mukerji. Apart from that, she will also be seen in Sanjay Leela Bhansali’s Gangubai Kathiawadi. She had been shooting for this biopic ahead of going to Maldives. The actress will be venturing into South with SS Rajamouli’s much-awaited movie RRR co-starring Jr. NTR, Ram Charan, and others.