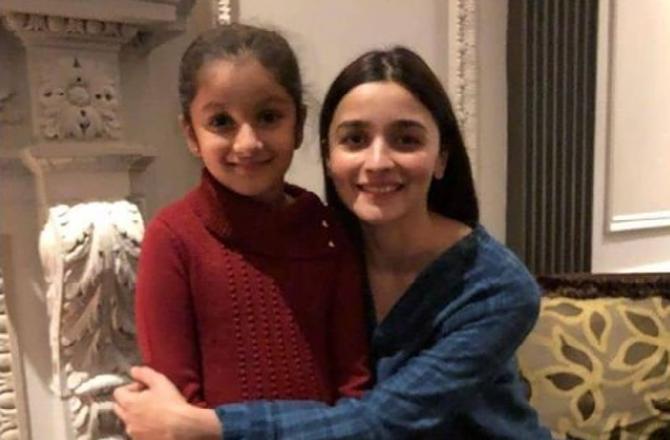 Alia Bhatt, just like a lot of other actors, has resumed work and kickstarted the shoot of SS Rajamouli’s RRR in Hyderabad. And taking out some time, she caught up with Superstar Mahesh Babu’s daughter. Some pictures were shared by Namrata Shirodkar and she even thanked the actress for a reason.

This is what she wrote on her Instagram post- “Pretty in @edamamma as ever @sitaraghattamaneni .. Thank you @aliaabhatt for the lovely dress!” [SIC]

RRR is SS Rajamouli’s next magnum opus after the blockbuster Baahubali. The period drama also stars Ajay Devgn, Junior NTR, and Ram Charan. The release date of this opus has undergone a change twice. Earlier slated to release on July 30 this year, it was then pushed to January 8, 2021. But given the lockdown that happened due to the Coronavirus pandemic, a new release date is yet to be announced.

“Alia, who makes her Telugu debut with the film, was expected to join the unit on November 2. However, her dates had to be shuffled, and she started shooting this week. Though a week-long schedule is on the cards, it could well extend to 10 days. On the first day, she filmed an emotional sequence with Ram Charan and Rama Rao Jr. Alia will have two more schedules next year before Rajamouli sir calls it a wrap,” reveals a source.

Mounted on a lavish budget, RRR is set in the early 20th century and traces the lives of two revolutionaries — Alluri Sitarama Raju, played by Charan, and Komaram Bheem, essayed by Rama Rao Jr. As Sita, Bhatt plays the love interest of Raju and serves as the ideological compass, as the two heroes fight against the British Raj and the Nizam of Hyderabad. The source adds, “Though largely fictionalised, the story — written by KV Vijayendra Prasad — draws instances from the two heroes’ continued fight against the establishment to assert the rights of the tribal community in Telangana region. However, the film steers clear of many crucial real-life events, including the Rampa Rebellion, which led to Raju’s death.”