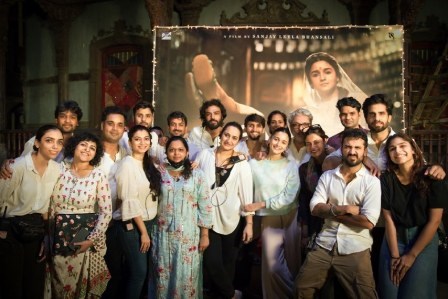 Sharing the news, diva took to social media handle and dropped a string of BTS pictures from the sets of ‘Gangubai Kathiawadi’ and announced the warp-up by penning an endearing note in the caption.

It read, “We started shooting Gangubai on the 8th of December 2019 .. and we wrapped the film now 2 years later! This film and set has been through two lockdowns…two cyclones…director and actor getting covid during the making!!! The troubles the set has faced is another film all together! But through all that and more… what I take away is the gigantic life changing experience! Being directed by sir has been a dream all my life, but I don’t think anything would have prepared me for the journey I was on for these two years…I walk out of this set a diff person today! I love you sir! Thank you for being you…there is truly NO ONE like you

When a film ends a part of you ends with it! Today I’ve lost a part of me.. Gangu I love you! You will be missed…P.S – special mention to my crew – my family and friends for these two years! without you nothing would have been possible! Love you guys!!!”

Gangubai Kathiawadi is loosely based on a true story, on the book Mafia Queens of Mumbai written by S. Hussain Zaidi. The film that depicts the rise of a simple girl from Kathiawad, who had no choice but to embrace the ways of destiny and swing it in her favour.

The film is scheduled to release on 30 July 2021 in Hindi and dubbed Telugu languages.