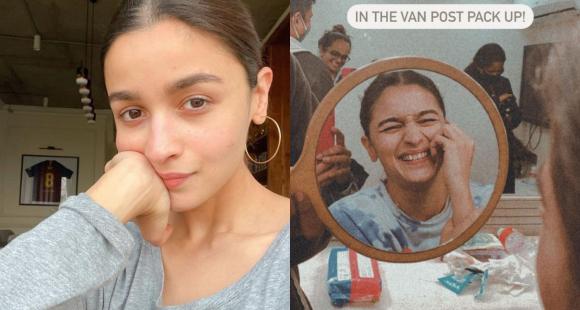 Taking part in the viral ‘Post a Photo Of’ trend, Alia Bhatt was posed with a variety of questions and the actress had immediate answers as she shared some fun photos.

Alia Bhatt removed some time from her hectic schedule on Wednesday and held a quick question and answer session with millions of her fans on Instagram. However, instead of the answers, Alia shared pictures as part of the viral “Post a Photo Of’ trend. The actress was asked a variety of questions and Alia had immediate answers as she shared some fun photos.

Out of the many questions, a fans asked the actress to share the 22nd photo from her phone’s camera roll. Alia did not hesitate and shared a selfie of herself. While the selfie as usual was a striking one, in the background Ranbir Kapoor’s framed FC Barcelona jersey could be spotted.

For the unversed, Ranbir is a massive Lionel Messi fan and almost three years ago he had his own FC Barca jersey signed by one of the best football players in the world. Looks like Ranbir’s autographed jersey by Messi holds a place of pride in his home.

Another fan asked Alia to share a photo from the sets of RRR. Paying heed to this fan’s request, Alia shared a picture from the vanity van in which she can be seen laughing her heart out. Alia was also asked about her favourite book and favourite person. The ‘Brahmastra’ actress shared a selfie with a Harry Potter book and sister Shaheen’s picture as her response.

Check out all the fun questions and Alia’s candid photos below: