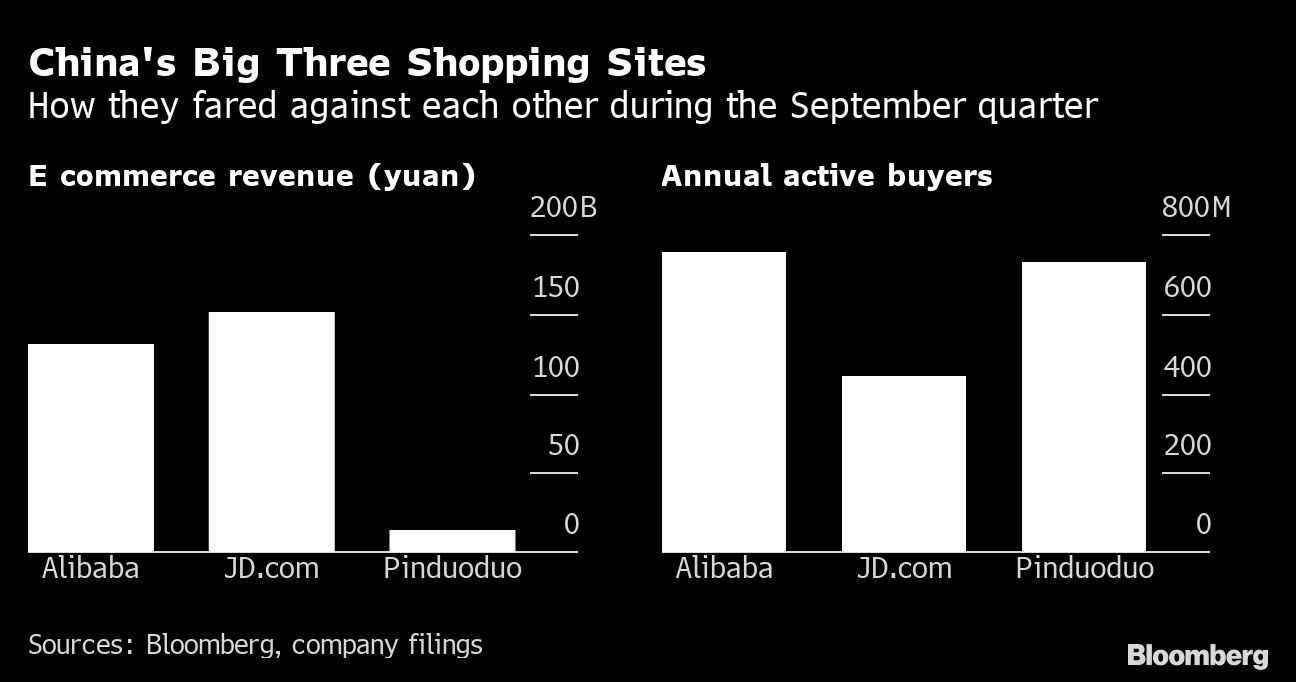 (Bloomberg) — Jack Ma’s minute-long video appearance last week gave Alibaba Group Holding Ltd. a much-needed reprieve after months of speculation over the extent to which Beijing will go after China’s largest online retailer. But that tonic didn’t last long as investors returned to grappling with the same questions that wiped $150 billion off its market value.

Alibaba’s projected to unveil its slowest pace of third-quarter sales growth in five years on Feb. 2 while it confronts potentially the biggest crisis of its two-decade existence. Uncertainty began in November when regulators first torpedoed Ant Group Co.’s record initial public offering, then launched a probe into the e-commerce firm. Alibaba shares have dropped 16% since Ant’s aborted debut, the worst performance on Hong Kong’s benchmark Hang Seng Index. That’s in stark contrast to arch foe Tencent Holdings Ltd., which had briefly neared a $1 trillion valuation after its stock reached new highs this week.

Ma’s company, once the standard-bearer for China’s fast-rising private firms and booming internet sphere, now faces penalties of as much as 10% of its revenue or some $7.8 billion if it’s found to have abused its market dominance. Executives may also face questions about how a possible crackdown on sister company Ant may hurt its outlook, given the latter firm provides consumer loans to half a billion of Alibaba’s shoppers. Meanwhile, consumption has lagged industrial activity in the broader Chinese economic recovery because of the lingering coronavirus.

“The extent of regulatory enforcement is still quite unclear. Practices like merchant exclusivity will no longer be possible. And Ant Group’s valuation will be much lower after the restructuring,” Bloomberg Intelligence senior analyst Vey-Sern Ling said. “From an operational and fundamental point of view, I don’t recall anything more serious than the events now.”

Revenue likely climbed 33% to a record 215.4 billion yuan ($33 billion) in the three months ended December, according to the average of analyst forecasts, driven in part by extended Singles’ Day promotions in late October and early November. That’s the slowest expansion for a December quarter since 2015.

Regulations focusing on online commerce — from forced exclusive arrangements with merchants known as “Pick One of Two” to predatory pricing and algorithms favoring new users — may hamper Alibaba’s ability to stem the slowdown. It’s also got to fend off rivals from JD.com Inc., which has previously accused Alibaba of unfairly pressuring merchants to shun competitors, to Pinduoduo Inc., whose 730 million annual consumers are closing in on Alibaba’s 757 million-strong user base.

Any regulations requiring Alibaba to implement a full halt to forced-exclusivity policies may hit Tmall’s sales by close to a tenth in 2021, before sales return to 18-20% annual growth in 2022 and beyond, according to San Francisco-based Octahedron Capital Management LP. As of now, less than 10% of the top-selling brands are exclusive, they estimated.

“Douyin and Kuaishou’s e-commerce businesses remain small today, but both will continue to grow, and may become greater threats in lucrative categories like apparel and personal care,” Bernstein analysts led by Robin Zhu said in a Jan. 25 report. “The pair have dominated the short video format to date, and it’s clear that both companies have designs on e-commerce as a way to monetize their share of user time spent.”

Changes to lending rules governing Ant may also pose challenges for its sister company’s commerce operations. While Alibaba Chief Executive Officer Daniel Zhang has said the company doesn’t quantify how much of its sales are funded by Ant’s loans, the fintech giant provides small unsecured credit to about 500 million people through its Huabei (Just Spend) and Jiebei (Just Lend) platforms. These are used in part to pay for purchases of clothing and makeup from the Taobao marketplace or trips booked on Fliggy, the group’s online travel site.

“The reduced consumer credit of Huabei will have a chilling effect on Alibaba’s e-commerce business, especially for the purchase of big-ticket items,” said Ella Ji, an analyst with China Renaissance. Even so, the overall impact remains marginal as customers can use credit cards and other payment means while shopping on its platforms, she added.

As part of the crackdown, Ant has been told to “rectify” its lending, insurance and wealth management services. The company’s planning to restructure its main consumer credit operations into a new consumer finance unit that has the right to operate nationwide, people with knowledge of the matter have said. And stricter capital requirements may kneecap its ability to issue loans as freely. Already, the firm has voluntarily lowered the credit limit for some young users on Huabei in a bid to encourage more rational spending.

Ant — one-third owned by Alibaba — contributed about $689 million to the e-commerce company’s profits in the September quarter.

“Ant is making adjustments to their business models to deal with what the regulators are likely going to ask them to do and that has negatively impacted Alibaba to a certain extent,” Franklin Templeton portfolio manager Jonathan Curtis said in a Bloomberg Television interview.

Tighter regulatory scrutiny over mergers may also impede the tech giant from snapping up promising startups in emerging industries or taking outsized stakes in other businesses to ward off competition. Alibaba — which had in recent years spent billions on stakes in hypermart operator Sun Art Retail Group Ltd. and NetEase Inc.’s Kaola e-commerce platform — was fined 500,000 yuan in December for not seeking approval before boosting its holdings in department store chain Intime Retail Group Co. in 2017.

With its core commerce operations under fire, the company may find a rare silver lining in its cloud division. Alibaba held a leading 40.9% share of China’s total cloud infrastructure services spending in the September quarter, more than double its closest competitor, according to industry researcher Canalys, and expects to expand the business further amid the country’s accelerated shift to digital operations. It has predicted that its cloud business will turn profitable in the fiscal year ending in March for the first time, after posting the narrowest losses in more than three years in the September quarter.

“We have a bullish view on cloud adoption in China and expect industry leader Alibaba to be among the prime beneficiaries of this growth,” the Bernstein analysts wrote.