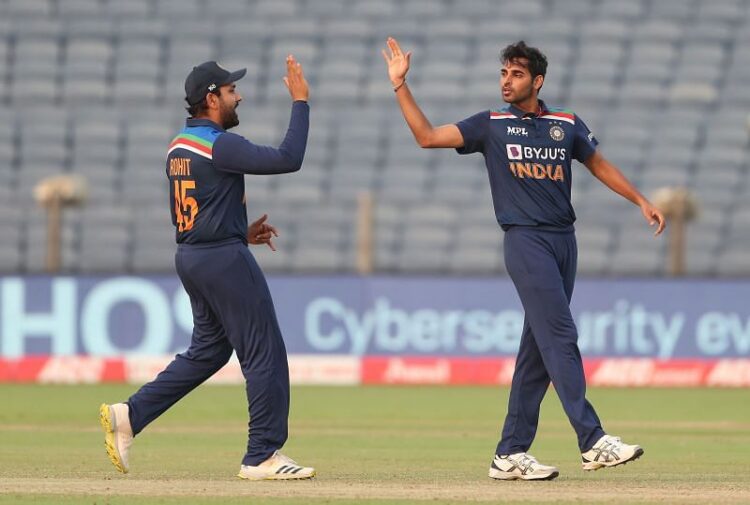 Ajay Jadeja believes that in the absence of Jasprit Bumrah, Bhuvneshwar Kumar took up the role of leading India’s bowling attack perfectly. The pacer, who was making his comeback after injury, had a stellar outing in the T20I and ODI series against England.

With Jasprit Bumrah taking a leave from the Indian team due to personal commitments, it created a huge void in the hosts’ fast bowling department. Ajay Jadeja pointed out how Bhuvneshwar Kumar played Bumrah’s role to perfection and was Virat Kohli’s go-to guy in tough situations against England.

“Bhuvneshwar took the responsibility of the leader of the pack, which is always there among bowlers. Apart from bowling with the new ball, all the roles which Jasprit Bumrah plays, Bhuvneshwar fulfilled that role. When the wickets are not coming, you bring him on, or you use him in the death overs when there is pressure.Bhuvneshwar played these role effectively,” Jadeja told Cricbuzz.

Jadeja also praised the seamer for his ability to out-think the batsmen.

“Bhuvneshwar Kumar just needs to take care of his body. Fast bowlers are always filled with aggression, but he also has a mind. He uses his mind, and not just his aggressiveness. He has an understanding of when to bowl which delivery. He makes the best of his experience,” Jadeja added.

Following India’s thrilling win in the third ODI against England, skipper Virat Kohli suggested that Bhuvneshwar Kumar should have won the Man of the Series award for his stellar performance.

Bhuvneshwar Kumar’s successful return to international cricket after a lengthy injury layoff is a positive sign for the Indian team. The seamer is expected to play a crucial role in the upcoming T20 World Cup, which will be held in India later this year.