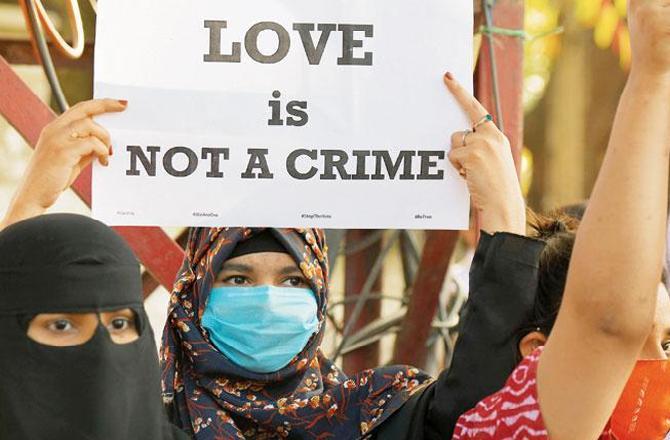 Amid the on-going controversies surrounding the ‘Love- Jihad’ law, the Allahabad high court on Friday stayed the arrest of a man, who was booked under the recently promulgated Prohibition of Unlawful Conversion of Religion Ordinance, 2020 for allegedly trying to marry a woman with the intention to convert her to his religion.

According to a report in Hindustan Times, a bench comprising justices Pankaj Naqvi and Vivek Agarwal told the police to not take any coercive action against the accused, Nadeem, challenging the constitutional validity of the ordinance.

The HC bench was hearing a criminal writ petition filed by Nadeem from Haridwar, who was booked by UP Police on November 29 on a complaint filed by one Akshay Kumar of Muzaffarnagar. This is the first time that a person booked under the new ‘Love Jihad’ law approached the HC.

Senior advocate SFA Naqvi, who represented Nadeem before the HC argued that the ordinance is ultra vires of the Constitution and any criminal proceedings initiated under its provisions shall be quashed.

“The Special Marriage Act is a central act which provides a special form of marriage for interfaith couples. It provides prohibited degrees for marriages like real brother and sister, etc. Once prohibited degrees for marriage beyond religion and castes are defined by the central act and then by the impugned ordinance new prohibited degrees are created on religious grounds, this amounts to creating a communal and divisive legislation which is not at all permissible in our constitutional scheme. Once the central government has made the law over the subject of marriage then there is no space available for the state government to pass the impugned ordinance,” he said.

In the FIR, it was alleged that Nadeem developed a relationship with the complainant’s wife with the purpose of converting her religion by marriage. Nadeem denied the allegations, asserting that he was being falsely implicated merely to avoid payment of some dues.