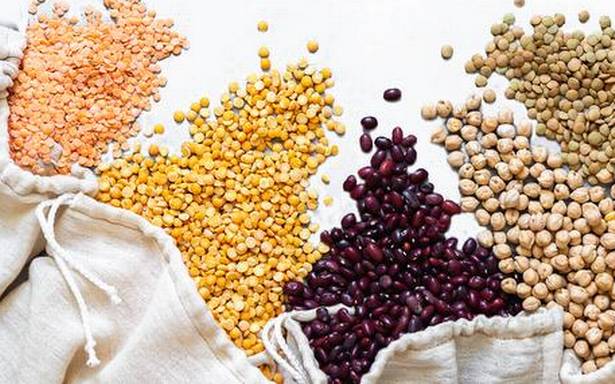 After languishing for four long years, growers of key kharif season pulses – tur/arhar (pigeon pea), urad (black matpe) and moong (green gram) – are delighted that prices have risen above the specified minimum support price (MSP). It is critical that the price situation is not disturbed. Pulse growers should be supported by allowing them to receive remunerative prices.

The price of tur/arhar is currently 10 per cent above the MSP of ₹6,000 a quintal. The First Advance estimates, released last September, placed the crop size at 40 lakh tonnes (lt). However, after looking at arrivals and rain damage, the revised assessment by the trade places the crop size around 15 per cent lower at about 34 lt.

Given that tur/arhar import is subject to quantitative restriction, lower crop size has resulted in supply tightness which in turn is reflected in prices. In the last three seasons, tur/arhar growers were forced to sell the produce at 25-35 per cent below the MSP for the season.

RELATED:  Extremism in the U.S. military ‘has been an issue for quite some time,’ says expert
RELATED:  Dr. Scott Gottlieb rips U.S. Covid testing system, says don't expect it to be fixed until fall

Urad prices, too, have trended higher in recent weeks and are currently trading at least 15 per cent higher than the MSP of ₹6,000 a quintal.

New Delhi should do nothing to intervene, but ensure that pulse growers continue to receive good returns after a long time. Last year, in a wholly unjustified hurry, the government reduced the customs duty on imported masur (lentils) and the Indian market was flooded much to the discomfiture of domestic growers.

Pigeon pea import quota for fiscal 2021-22 is due in April this year. While the import ceiling may be announced in time, it is critical that permits are issued in a manner that actual imports arrive after the South-West monsoon forecast is made and MSP for the upcoming kharif planting season is announced.

Physical imports after June will help augment supplies during the festival season in August, September and October. The same goes for urad and moong import, too.

Chana (desi chickpea) rates have remained below the MSP of ₹5,100 a quintal and are currently trading at around ₹4,500. At 112 lakh hectares, the planted area under chana is a record one. The prospect of 100 lt production is real. Chana harvest pressure will be felt sometime mid-March onwards.

It is critical that chana growers are well supported through a robust procurement mechanism. Infrastructure must be further fortified. Last year, Nafed’s procurement came in handy for distribution of free ration to vulnerable families. There is a strong case for distribution of pulses through government welfare programs such as PDS and NFSA with the objective of advancing nutrition security.

The author is a policy commentator and agribusiness specialist. Views are personal

Gold prices have corrected 16% from their peak. Should you buy?

Cannabis Stocks Watchlist: Is Sundial Growers a Pump and Dump?

The cannabis sector remained volatile this past week after positive earnings and...
Read more

Taylor Swift VS Evermore Theme Park: Things Heat Up As The Singer’s Attorneys Declare A Countersuit

GameStop shares close 104% higher in afternoon rally; up another 100% in after hours