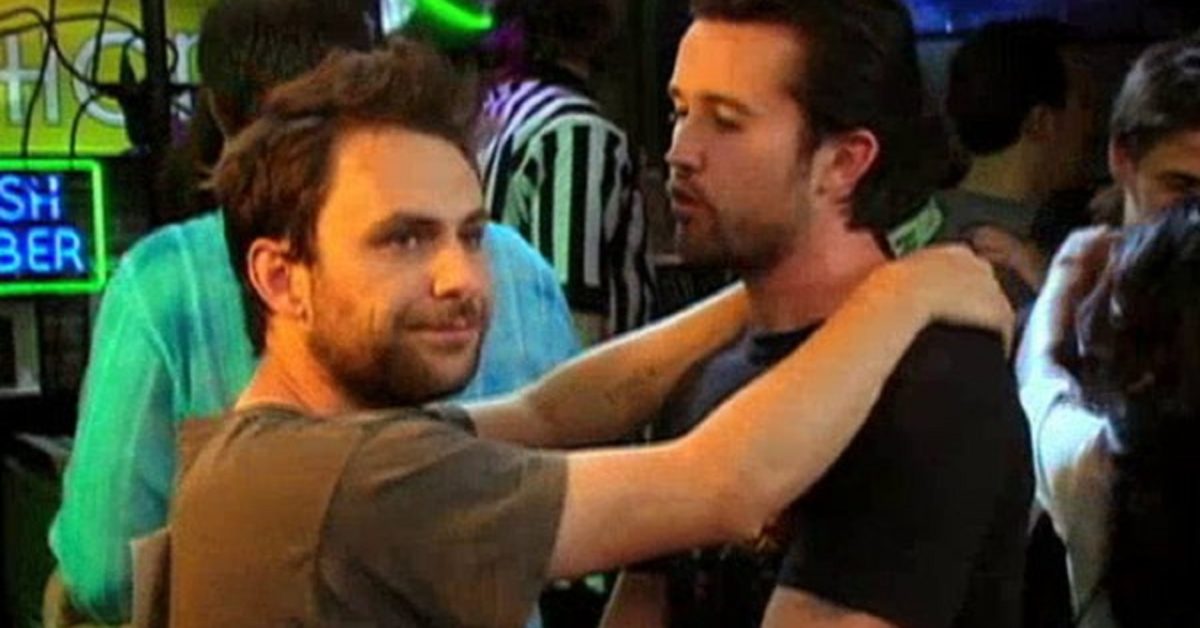 For Glenn Howerton, Kaitlin Olson, Rob McElhenney, Charlie Day, and Danny DeVito, 2021 is already starting to look like a pretty good year for The Gang from It’s Always Sunny in Philadelphia. Along with their respective projects away from South Philly (A.P. Bio, Mythic Quest, and more), The Gang will also be heading back to Paddy’s at some point this year for a record-setting 15th season (with a deal to keep the doors to Paddy’s open at FXX and FX on Hulu through season 18). But one of the things we love about the real-life Gang is that no matter how busy things, they still never stop being just as tight with one another like they’ve always been. We found a perfect example of that on Tuesday when McElhenney took to social media to share an outtake from Season 3 episode “The Gang Dances Their Asses Off” to celebrate Day’s birthday.

“My guy. None of this was scripted. He just started saying it and it was so incredibly childish that it reduced me to a little boy. He’s probably the funniest person I’ve ever met, a great partner and one of my best friends. Happy Birthday [Charlie Day]! Thanks for reducing me to giggling mess for all these years,” wrote McElhenney in the caption- and you can check out the video below (with more details and our favorite moment following):

Directed by Matt Shakman (WandaVision) and written by David Hornsby, Scott Marder, and Rob Rosell, the 15th episode of the third season found Charlie’s not-so-brilliant ability at reading and perception resulting in Paddy’s being put up as the grand prize in a radio dance marathon competition being run by Q102’s Fat Michael and DJ Squirrely D (Sklar Brothers). So you know what that means, right? Thus, the episode title- except even this early on in the series’ run, The Gang had already created a stable of enemies who would’ve loved to take the bar off their hands. In honor of Day’s birthday, we present the funniest moment in an episode screaming with great moments- as Charlie offers Dennis enough of his white, hot cream to take his breath away:

So what’s the good word when it comes to production on the record-setting return of It’s Always Sunny in Philadelphia? Bleeding Cool had the opportunity to ask Howerton during our one-on-one interview ahead of A.P. Bio Season 3. In the clip below, Howerton explains that the combination of pandemic-related delays and other projects that the cast is committed to (for example, McElhenney’s Mythic Quest, Olson’s upcoming Jean Smart-starring comedy, as well as other television and film projects) has made it difficult to finalize a production (“at this point, it’s more of a timing thing”). Though they may still be in the process of “trying to figure it out,” Howerton expressed how excited and committed they are to a strong 15th run (saying “maybe even a sixteenth” at the time).

In April, McElhenney revealed that writing was underway, though production timelines were in flux due to production shutdowns caused by the COVID-19 pandemic. McElhenney was hopeful that they’ll be able to “jump right into something new with ‘Sunny'” soon. And he also made one thing clear: as long as the fans want it (and FX Networks wants to keep paying for it, which we now know they clearly do) then Paddy’s will be keeping its doors open for some time to come. “How many years do I have on this planet? I’ll do it forever. If people keep watching it and we keep having fun, why would we ever stop? It’s my dream job. I never understand why people leave shows. I don’t. I never understand that,” McElhenney explained. “The show is what I dreamed of doing my entire life. I don’t take it for granted. And if they keep paying me and the audience keeps watching it and I still love it… why would I ever stop?”